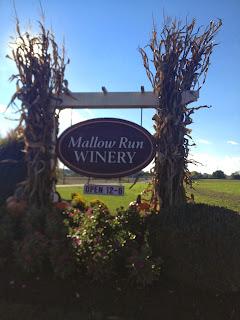 As many of you know, the Minx is also a performer on the stage, and I often get called away to gigs all over the country.  For the past few months, I have been holed up in NW Indianapolis bringing a little comic relief to the drama of "Les Misèrables" eight shows a week.  But that doesn't mean I've forgotten about wine!  Far from it.  I have scoured the local Trader Joe's for sub-$8 finds, I have wandered the rows of Kahn's Fine Wine superstore, caressing bottles as if they were long-lost friends, and I've even visited a winery or two.


You may know that wine is indeed made in every one of the 50 states.  Not all of it is excellent by any means, but as consumer demand rises, more and more "outpost" winemakers want to showcase good product. 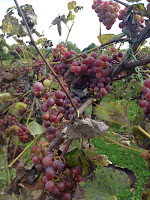 I performed in "9 to 5" the musical at this same theatre earlier this year, and right after I arrived for rehearsal, Indiana was granted its own AVA (American Viticultural Area designation.)  I was excited to celebrate with some local wine, but there are still some obstacles before Indiana is recognized as a top-tier winemaking state. 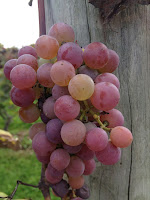 In fact, it may never be; California, New York and the Pacific NW are the historically good areas for US winemaking precisely because their climate, land conditions and proximity to large bodies of water make them the best places to grow wine.  Other states like Virginia, Texas and New Mexico are overcoming geographical obstacles to produce quality wines, but perhaps this particular midwestern state may never get a competitive boost.

That being said, there are a number of wineries in the Indianapolis vicinity, as well as numerous more in the southern part of the state.  They are cultivating international varieties like Merlot and Syrah, but also working with hybrid grapes (a mating of wine grapes - vitis vinifera - and heartier 'regular' grapes from another vitis species) to some success. One lovely fall afternoon my roommate Stephanie and I swung by Mallow Run winery, located in Bargersville, IN, about 30 minutes southwest of Indianapolis, where they offer a generous sampling of wine to taste.  During our visit, they were pouring from 21 different options.

The property of Mallow Run has been family run for 150 years, although the vineyards were only planted about 13 years ago.  There is a lovely tasting room, and visitors can even buy a glass or bottle of wine and picnic inside or on the grounds. 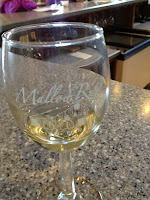 Stephanie began with the 2011 Mallow Run Seyval Blanc (a hybrid white grape), which was very pale with a 'green' nose, and was simple, clean with light acid.  She found it very appealing. $11

I tried the 2010 Mallow Run Estate Chardonel (another hybrid, much like Chardonnay - the name similarity is no accident!)  It was one of my top picks, with a buttery nose, firm acidity of tart lemon, very dry with a nice body. $17

The 2011 Mallow Run Rosé of Chambourcin (you guessed it, another hybrid) was the color of very pale onion skin.  It didn't have a very expressive nose, but was slightly off-dry, with flavors of strawberry, cherry and some herbs on the finish.  $14 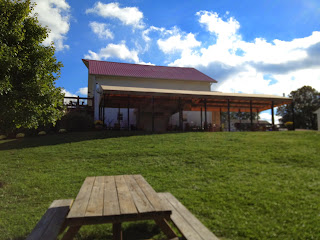 Similar in style to a Pinot Noir, the 2011 Mallow Run Chambourcin had a medium brick-y color, with a smoky nose, and flavors of dried cherries and pepper.  Very pleasant.  $17.

Stephanie thrust her 2011 Mallow Run Syrah under my nose, and I got why right away; there was a ton of floral perfume!  In the mouth, the rose and violets shone through, with spice and pepper and a hint of blackberry liqueur, although this was very light in style.  $19

Another personal favorite was the 2010 Mallow Run Merlot with a somewhat pale garnet color, it had a vegetative nose, but the lush fruit balanced that out.  It was very approachable, with lots of blackberry and blueberry fruit, a hint of oak, and light tannins.  Complex but quaffable.  $19 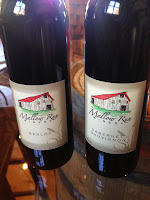 The 2010 Mallow Run Zinfandel was a medium ruby color, with a tantalizing smoky meatiness on the nose, and plum and dark berries in the mouth.  However, it was a little unbalanced for my taste, with lighter flavors and a bit too much acid; a victim of the growing locale, I expect. $19

Finally, another fave, the 2011 Mallow Run Cabernet Sauvignon.  It had a medium dark ruby color, with tons of berry fruit on the nose.  In the mouth, black fruits and toasty oak were complimented by a smooth tannic structure.  Velvety and dense.  $19

All in all the offerings we tasted at Mallow Run were solid and many were interesting.  I did buy a couple of bottles for later!  And Stephanie and I each chose a glass and grabbed a fruit and cheese plate and enjoyed a gorgeous afternoon in the farmlands of Indiana. 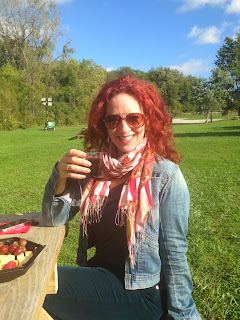 One tricky post-script: with the exception of the off-dry rosé, we didn't try any of the sweeter-styled wines that day.  Actually, the sweet offerings outnumber the dry ones, and it's due to the fact that some of these hybrid and other non-vitis vinifera grapes perform better with natural residual sugar.  But also, the midwestern palate seems almost stubbornly attached to sweet-style table wines; Mallow Run's best seller is their "Rhubarb" wine.  I can't expect a winery to cease production of their most popular products in order to adhere to my desire that traditional wines from unusual locales get the boost they need.  But at the very least, there's something for everyone!

So don't be afraid to go out into the wilds and sample some wines from less-common locales.  You may discover something unexpected!  Cheers.