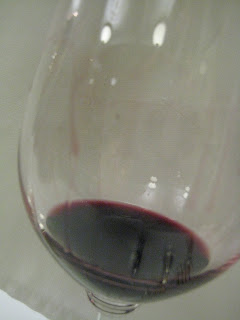 A few weeks ago, I embarked on an ambitious journey with fellow Wineaux Carol: visit four NYC wine bars in one night.  After lovely experiences at TURKS AND FROGS and THE UPHOLSTERY STORE, we meandered over to CENTRO VINOTECA, located at the bustling intersection of 7th Avenue S and Barrow Street.

Immediately the difference in ambiance between our prior two stops and this one struck us, as we snagged the last two seats at an extremely crowded bar.  At this point we were ready to order some dinner but as our plans for the entire evening were vague, we hadn't made a reservation.  I suppose in one sense we were lucky to get seats at all.  Unfortunately, the party directly to my right had no sense of space, and I was rudely jostled throughout the entire meal.  No fun.

In all fairness, I suppose I should return to Centro Vinoteca during a quieter time, as the craziness was the root of my dissatisfaction with the place.  The food was very good - both Carol and I sampled different pastas - and the wine list was nicely focused, with over thirty Italian wines available by the glass.  (I should say by the quartino, for at Centro Vinoteca, the pour is measured out to a vessel slightly over a glass.)

But our bartender Connor was slammed with patrons, and when I pronounced the first wine we were tasting as corked, he rather fussily agreed with my assessment, seeming put out at the need to remedy the situation.  Then, after opening another bottle, he poured it immediately without offering a taste.  Bad form, in my opinion, no matter how crowded the bar.

[It is unfortunate that many people mistake the off-odor of 2, 4, 6 - Trichloroanisole (TCA) as merely an unpleasant note in the wine.  In reality, it is a by-product of the cork bleaching process and can happen to any wine stopped with a traditional cork.  Some people are more sensitive to TCA than others, and while it is in a Wineaux's best interest to learn to properly identify this cork taint, is is also the responsibility of the server to acquiesce to his customer.]

Luckily, the second pour of 2009 Bolgheri Rosso Scire was fine, with a nose of cherries, and blueberry pie filling, herbs, rosemary and a hint of prune on the palate.  It was warm and rich with a nice finish and good body. [88]

We also tasted the 2009 Colline del Sole Aglianico, which had a nose of roasted meats, and cherry pie and violets in the mouth.  It was bright, but balanced with a good earthiness on the finish. [86]

With the crowd, noise level and nudgy neighbors, we couldn't wait to get out of there.  But I'm not ready to completely write off Centro Vinoteca just yet.  On Mondays they have half-price bottles, and are offering a five-course wine tasting dinner on Sundays this summer, so I expect I will give it another go and cross my fingers for a more relaxed, wine-focused experience. 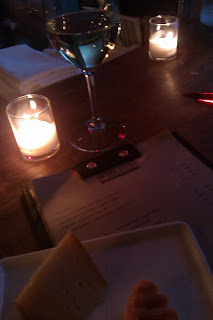 Tucked away on a quiet stretch of Washington Street in the way West Village is a tiny gem - The Upholstery Store.  Do not bring grandma's needlepoint-embellished dining chairs with you, there is actually no upholstering going on in this dimly-lit wine bar.  At least not as far as I could see on my recent visit with fellow Wineaux Carol.

A footnote of sorts to Kurt Gutenbrunner's Wallsé next door, the Upholstery store is heavily Austrian-influenced, giving us Big Apple Wineaux a chance to 'stretch our legs' from our usual tours of France, Italy and the US.

We began with a pair of offerings from Weingut Walter Buchegger - I had the 2009 Riesling Lössterassen Kremstal, which exhibited pleasant florals and notes of melon and peach with light acidity [85] and Carol sampled the 2008 Grüner Veltliner Pfarrweingarten, which had complex notes of lemon, pear, lavender, honey, earth and white pepper, nice body and good finish although light in acidity. [88]

At this point in our tour, we were getting a little hungry, so snacked on some nuts and a pair of cheeses (the Epoisses was a standout!)  The menu at The Upholstery Store is limited, but pretty perfect - snacky options, a few entrees, salad and strudel.  Our bartender Evan was incredibly knowledgeable and made perfect suggestions along the way, including guiding us to our next two wines.

I had the 2008 Peter Schandl Furmint Neusiedlersee Hügelland - nose of lemongrass and earth, a hint of CO2 "shpritz," good weight mid-palate with a long finish and notes of grass and buttered toast.  Carol also suggested an unusual but apt descriptor of "oatmeal" (good one, Carol!) [88]  She was sipping the 2009 Peter Schandl Muskateller Gelb Brut, which had candied pear and apricot on the nose, nice sweetness at the top but bone dry finish.  We both found this wine flirty and fun - a little 'schitzo,' but in a good way! [87]

While it would have been great to stay and continue our in-town journey to Austria, we had a plan and needed to head to our next spot.  But Evan wouldn't let us leave without trying the 2007 Kreinbacher Somló Juhfark.  This Hungarian wine is from a tiny region just off the Austrian border, and is made with 100% Jufark (a variety previously unknown to me, grown exclusively in Hungary).  It had a barnyardy nose and was very clean and steely with a hint of butter, sweet lime and herbs.  It had a light acidity but a nice balance.  Aged ten months in Hungarian oak. [88]  Carol wasn't as interested in this wine, but then again, she did apply menthol lip balm just before tasting it... ooooohhhhh, Carol!  (In all fairness, she did think we were leaving when she did so.)

While there are other regions represented on The Upholstery Store's wine list, the opportunity to taste less-familiar Austrians wines is a fantastic excuse for a visit.  And next time, I'm saving room for the strudel.