How to properly describe "Cru Bourgeois"... well, forgive the lack of nuance, but it's basically Bordeaux you can afford!

A brief history: in the 1700s, merchants in Bordeaux, France, were finally allowed to own Châteaux, and they became the Cru Bourgeois. By 1824 there were 300 different Cru Bourgeois properties, and, in 1850, they were divided into three levels of quality. In 1932, the designation became "quasi-official," and in 2003, it became, well, "official-official." Currently there are 247 Châteaux, and three levels: Cru Bourgeois, Cru Bourgeois Superieur, and Cru Bourgeois Exceptionnel. Unlike the Bordeaux 1855 rankings, these were reviewed every ten years, and there is currently an annual "assessment of quality." At a relatively low price point, around $20-50, these are great opportunities to drink wines from Bordeaux that are a stone's throw from many of the legendary Bordeaux properties, at a fraction of the cost! 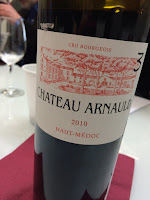 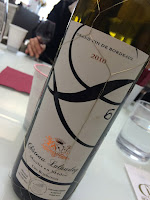 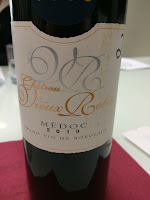 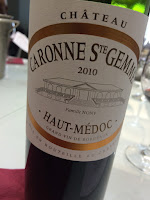 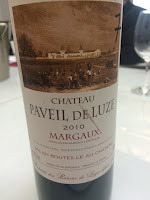 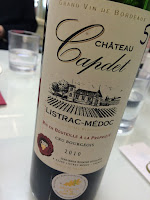 I quite enjoyed the 2010 Château Lalaudey: medium-ruby color, nose of minerals and red berries. Really tasty (esp. for the price!) with bright red fruit, a bit of dusty earth, smooth and integrated—solid effort. ~$15

The Château Vieux Robin was a medium-plus garnet, with lots of floral perfume and earth on the nose. Strong fruit, compact flavors. ~$17.

You all know I like my "sexy" wines, and the 2010 Château Arnauld fits the bill! Opaque ruby color, very floral nose, with brick dust and chalk and rich cassis. Tasty, sexy, and luxe. Excellent balance. A bit spicy and peppery. ~$35

Perhaps the most "Bordeaux-like," in my opinion, was the 2010 Château Capdet. Almost opaque garnet, with a nose of cassis, clay, violets. In the mouth, purple fruits and flowers, dense and intense, earthy. I wrote, "DELISH." ~$27.

Finally, the 2010 Château Paveil de Luze was an opaque garnet, with cherry, clay, toasty brioche, liquid herbs, smoke and minerals on the nose. I found it somewhat tight in the mouth compared to the opulence I was expecting from the bouquet, but it was smooth and elegant, with a clear pedigree. ~$40

So, Wineaux, seek out some Cru Bourgeois, and let me know what you think!
Cheers.