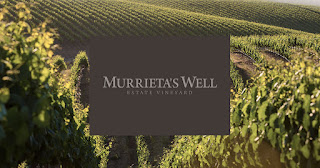 You would be forgiven if you're not familiar with Livermore Valley, CA. Nestled inland from the San Francisco Bay, it is overshadowed by its famous neighbors to the north, Napa and Sonoma. But winemaking has been happening there since Spanish missionaries planted grapes in the 1760s!

Robert Livermore planted the first commercial vines in the 1840s, lending his name to the region. In 1883, Wente and Concannon vineyards were founded, and they remain two of the most "famous" producers from Livermore. In 1982, Livermore Valley was granted its AVA (American Viticultural Area designation, in recognition of a worthy sub-regional title,) and there are currently over 50 wineries operating in Livermore Valley. But Livermore Valley still seems to be off the radar for many Wineaux.

I recently had an opportunity to taste a number of offerings from Murrieta's Well Estate Vineyard, and if they are any indication, that lack of awareness is about to change!

To begin with, this estate was created with cuttings from the renowned vineyards of Château Margaux and Château d'Yquem in France. Louis Mel planted the vines and built a gravity-flow winery in 1884; it's where the current tasting room is located. In 1933, Mel sold the vineyard to his friend Ernest Wente, and it has been a part of the Wente family estate ever since. Murrieta's Well winemaker Robbie Meyer is passionate about the high quality of grapes grown on the estate vineyards, and is especially effusive regarding his blends, where he can exercise his "artistic touch." 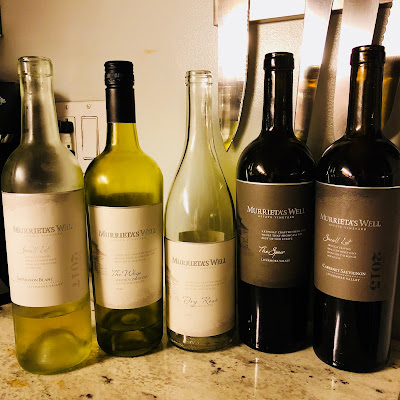 2015 Murrieta's Well Dry Rosé
This is as friendly and delish a summertime sipper as you could hope for. Strawberry, Rome apple, and watermelon fruit is balanced with sage, iodine, and minerals, with a cherry-lime rickey scenario going on. Yum, yum, yum. A couple of us wanted to grab the rest of the bottle and haul it to the beach pronto! ~$30.

2015 Murrieta's Well "The Spur" Red Blend (48% Cabernet Sauvignon, 20% Petite Sirah, 18% Merlot, 8% Petit Verdot, 6% Cabernet Franc)
This wine deftly fits that elusive spot between complex and approachable: cassis, black cherry, black raspberries, cedar, rosemary, black pepper, chocolate, mocha, lavender, earthy minerality, with present but silky tannins, it is intense and integrated, but doesn't knock you over the head. One of my faves, and an excellent value at ~$35.

2015 Murrieta's Well Small Lot Cabernet Sauvignon (87% Cabernet Sauvignon, 11% Petit Verdot, 2% Malbec) pre-release
(FYI, CA labelling laws permit the wine to be labelled with a single varietal if that grape comprises at least 75% of the blend.)
My guests went nuts over this wine! They agreed it provided much more of the expected "California Cab" character: intense and velvety, blackberry, blueberry, vanilla, black pepper, dark chocolate, barnyard, peat, violets, toasted wood, with a little prune thrown in there. Deep but not too heavy. Someone throw a steak on the grill for this baby, and make sure to grab a few bottles when it becomes available, you'll definitely want to watch it evolve over the next 8-10 years. ~$58

Regular readers know I routinely champion wines from less-well-known regions -- while California is obviously very well-known, smaller areas like Livermore Valley are clearly worth exploring. Especially if you are a fan of nearby Napa's Sauv Blancs and Cabs, pick up a few of Murrieta's Well wines, and enjoy their power and elegance at a pretty competitive price point!

Wines provided for review by snooth.com.
Posted by Annie Edgerton at 12:52 PM 1 comment: