ODE TO BUBBLY: The Sparkling Wines of Gruet 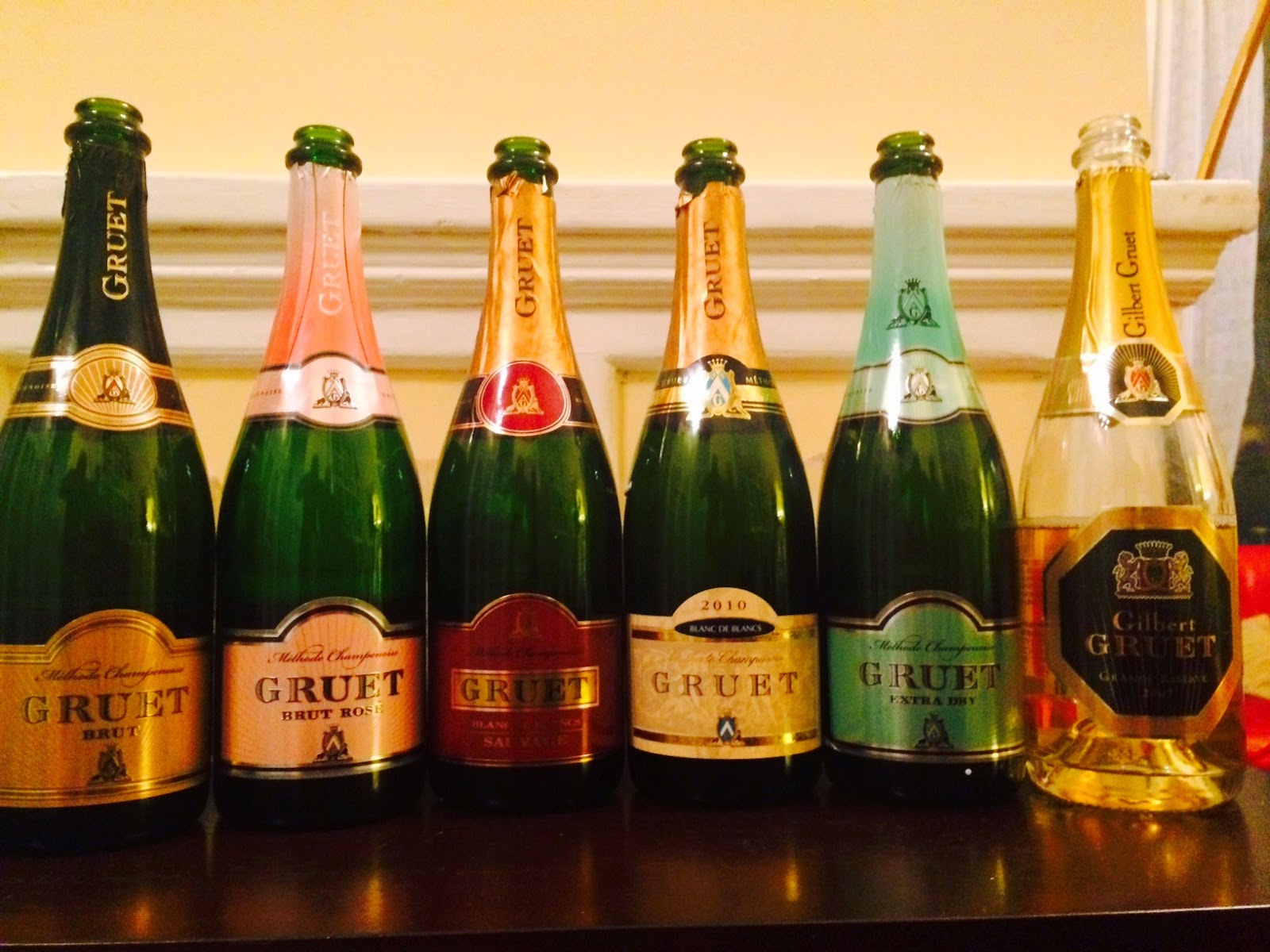 If I had my druthers, I'd drink Champagne all day long, every day. Well, druthers AND a large pocketbook, as Champagne can be a very expensive habit. Lucky for me, there are a large number of American producers who make delicious sparkling wine in the Mèthode Traditionelle—aka the Champagne method—and their wares encompass the range of Champagne styles and brilliance quite well while being kinder on the wallet.

A particular personal favorite is Gruet—their NV Brut made one of my very first "Top 20 Under $20" lists. Located in Albuquerque, New Mexico (wait, what, NEW MEXICO?!) this family-run winery has been producing award-winning sparklers since their first release in 1989. You may still be trying to wrap your brain around the concept of quality wine from New Mexico, but the American Southwest has many characteristics of fine-wine growing regions, namely good soils and high-elevation vineyards which cool greatly overnight so the grapes don't ripen too much. (Check out my roundup of nearby Arizona wineries here and you'll get an idea of what the area has to offer.)

While I've found the Gruet Brut and the Gruet Rosé in wine shops all around the country, some of their other offerings are less widely distributed, so when I got an opportunity to purchase a mixed case, I jumped on it. I invited some friends over to taste the array with me, and we had an eye-opening experience getting acquainted with some of the styles of Gruet bubblies.

As kind of a "baseline," we began with the NV Gruet Brut. Everyone agreed it was a solid offering, with notes of green apple, a little yeastiness, and lemon/grapefruit citrus. A blend of 75% Chardonnay and 25% Pinot Noir, it remains a fave go-to sparkler. ~$16. 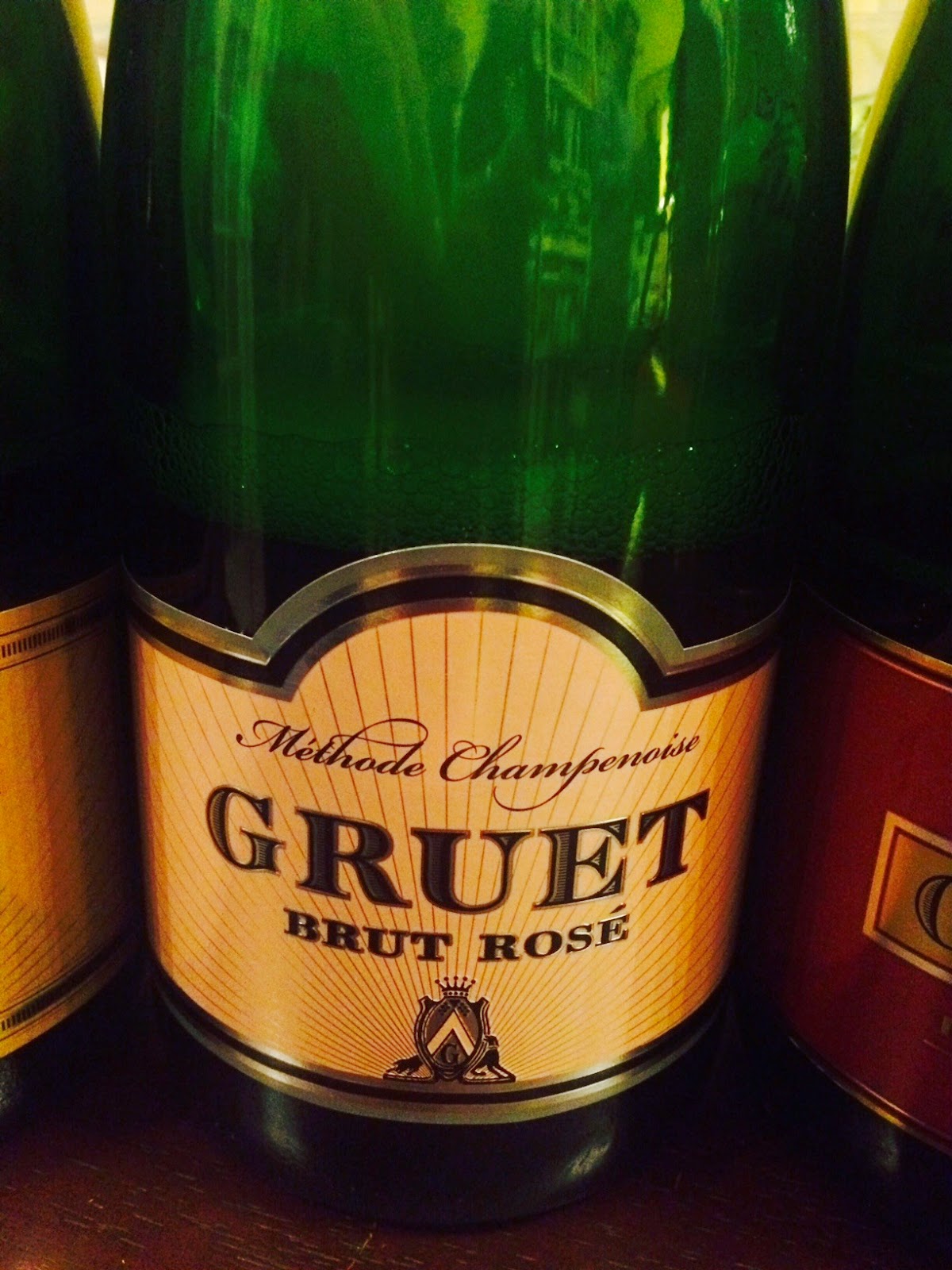 Next up was the NV Gruet Rosé. 100% Pinot Noir, with a beautiful salmon color. Lots of strawberry on the nose, with raspberry in the mouth, and some herbs and florals to round it out. There is 2% still Pinot Noir added to the bottle, I imagine to add a little depth of flavor… whatever the reason, it works, and suddenly it seemed everyone had a new favorite go-to. A little cheekier, a little sexier, for ~$18.

Our third bottle was the NV Gruet Sauvage, which is 100% Chardonnay, and made in the driest, Brut Nature style. We all agreed there was a kind of dryer sheet/mineral soap-iness character which took some getting used to. Definitely steely and crisp, with mountain florals and lemon peel. Maybe not the universal favorite of the eve, but people kept coming back to it, intrigued. ~$20. 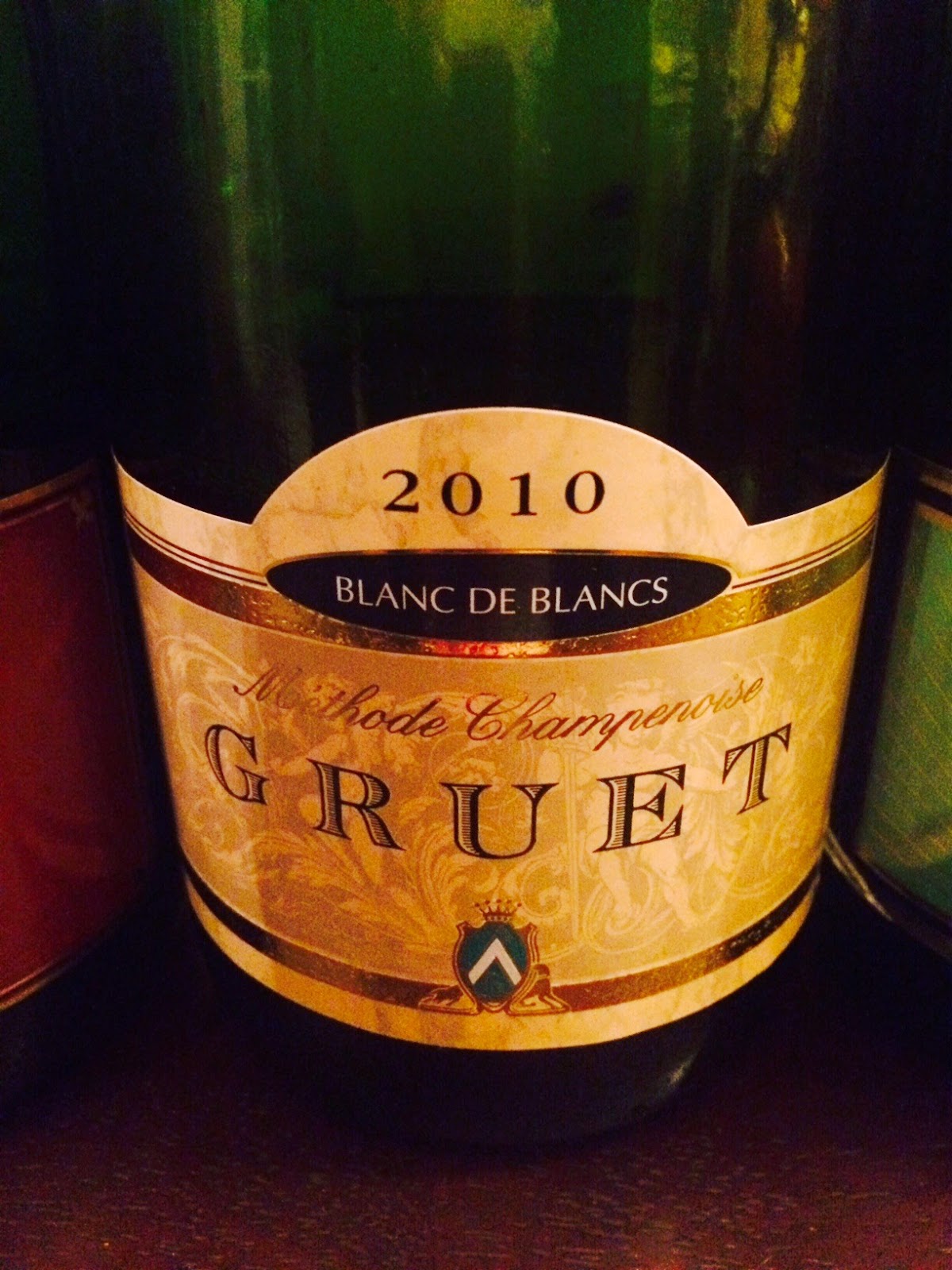 Our first vintage offering was the 2010 Gruet Blanc de Blancs, also 100% Chardonnay ("Blanc de Blancs" basically means "white from whites," so only white grapes are used, i.e., our old friend Chard.) This wine spent three years on the lees, and the subsequent richness and roundness shone through in the notes of Gala apple, toastiness, and its creamy expression. We started to go a little bonkers for this one, no lie. When you realize a vintage Champagne is going to run you generally around $80-100, this baby is even MORE attractive at ~$25. Boo-yah. 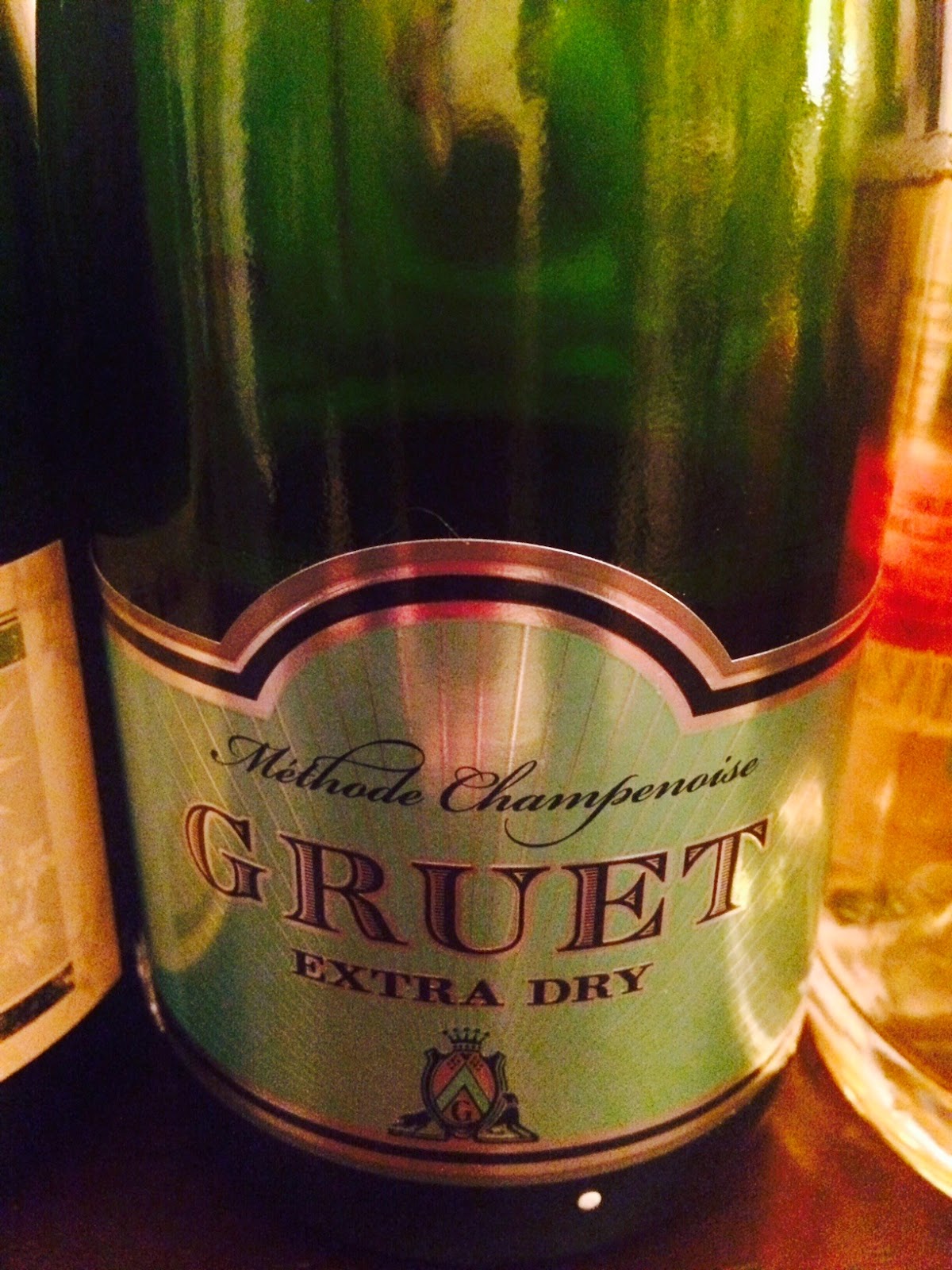 Now, the dosage levels of Champagne are varied and confusing, with the wide ranges of allowed residual sugar and the nomenclature, so we'll just leave it that Extra Dry is smack in the middle, with higher residual sugar than a Brut, but not necessarily sweet-tasting. You'll sense the ripeness of the fruit, and a higher viscosity, but as Champagne's acidity is so bright, it can be balanced in a glorious way. And so it follows that a couple of minds were blown by the NV Gruet Extra Dry. Again 100% Chardonnay, and bottle aged a minimum of 18 months, it had notes of marzipan, white peach, rose petals and honeysuckle. ~$16. (I really wish I could've gotten my hands on the Gruet Demi-Sec, which would have had still more residual sugar, but this was certainly an eye-opener for those in the group who would usually shy away from a "sweeter" offering.) 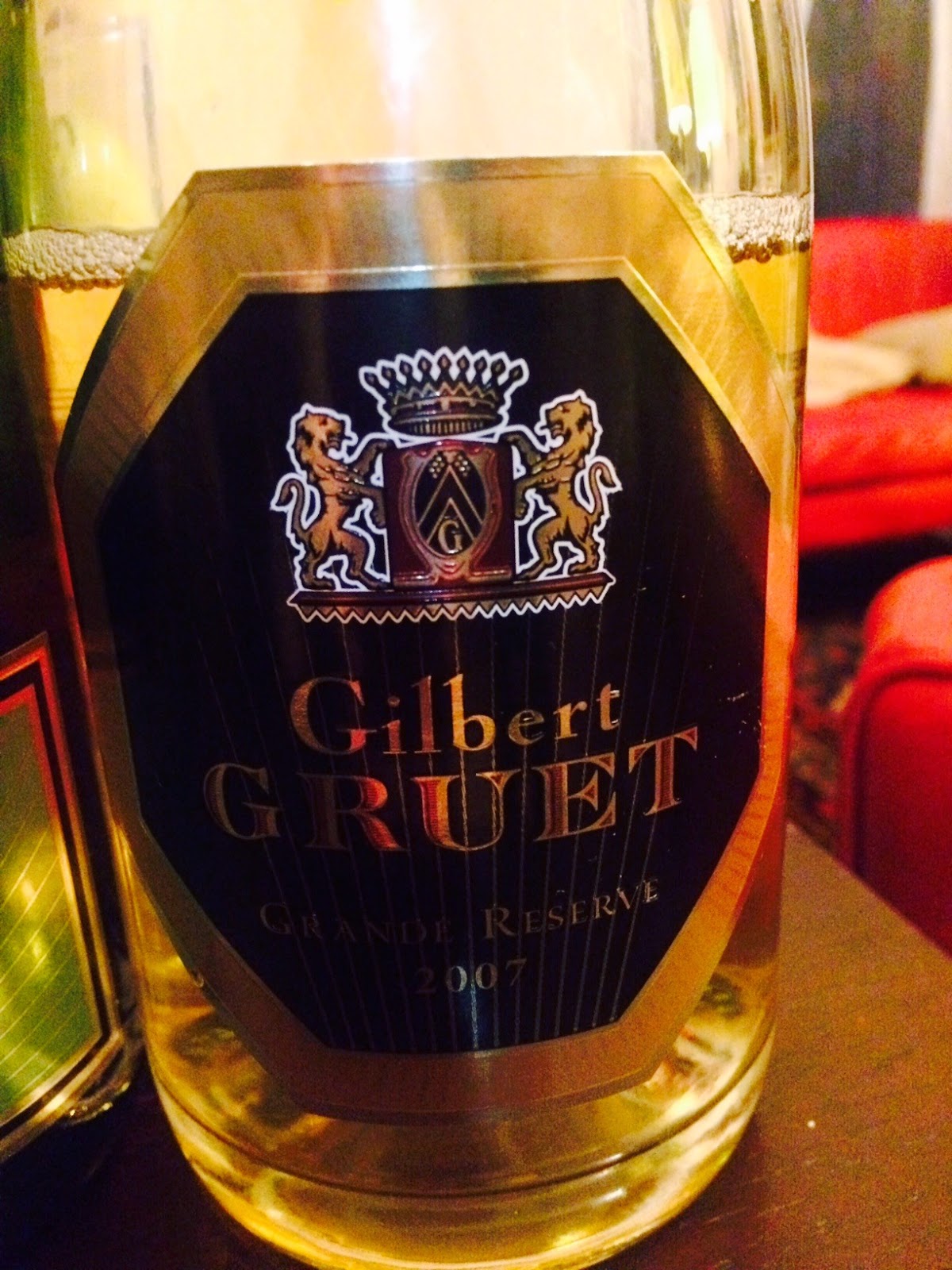 Finally, the Tête de Cuvée, the 2007 Gruet Gilbert Gruet Grand Reserve. Named after the winery's founder, this is a 100% Chardonnay from the property's oldest vines. They use free-run juice, and age the still wine after its first fermentation in French oak barrels. It spent six years aging on the lees, and only 600 cases were made. And it was everything you'd hope from a jewel in the crown: toasty brioche, beautifully yeasty, notes of vanilla, taffy, baked yellow apple, lemon, and mountain florals. Complex and hedonistic. So amazing, I want a whole case all to myself (to drink all day long, every day.) And get this… it's only $43. What the what?!?!

This tasting only confirmed what I'd long thought about Gruet: very high quality across the board, a consistent Brut "house style," and vintage offerings that were elevated and nuanced. Kinda like a good Champagne… at a fraction of the price. As I said, the Brut and the Rosé have wide availability, and stores that carry them may be able to get you some of the rest of the portfolio. But you can also purchase through the winery's website here. I hope to get the chance to visit New Mexico in the near future and see the Gruet operations first-hand, but until then I remain very, very thankful that I still have a few bottles left in my case!


Posted by Annie Edgerton at 5:06 PM No comments: