MAMBO ITALIANO at the TRE BICCHIERI 2015 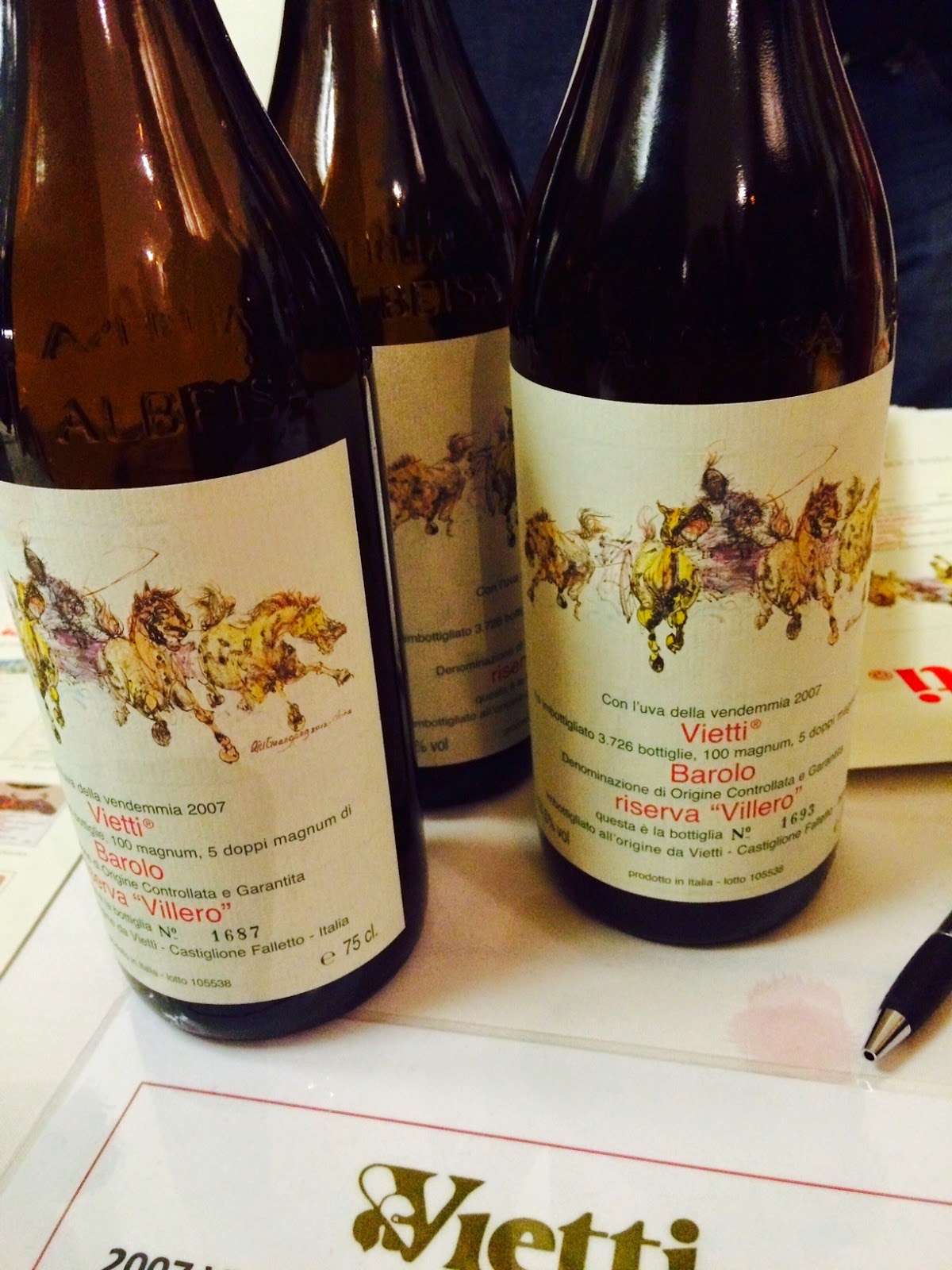 Every year, the Gambero Rosso organization awards the Tre Bicchieri (or, "three glasses,") to a select number of Italian wines from out of 45,000 sampled. Winners and runners-up are showcased during a world tour, which stopped off in New York early February.

Out of all the industry events I attend every year, the Tre Bicchieri seems to be one of the zaniest. Maybe it's the generally effusive nature of Italians themselves, but I think a lot has to do with the layout: wineries are organized by importer (not region, style, or even alphabetically,) so you're bopping from Franciacorta to Brunello to Amarone to Sicily and back again. Maybe it's also that there are a lot of friends and consumers allowed, so people are drinking more than spitting! Who knows. Just… zany.

As with many industry tastings, it's impossible to sample every single wine. IMPOSSIBLE! (For kicks, you can check out my madcap attempt to hit as many of the 250 wineries at the latest NY Wine Experience as I could.) At this year's Tre Bicchieri, there were 321 wines from 180 producers, so even if you were a speed demon and took only one measly minute to taste each wine, it would still take you almost five and a half hours to hit them all.

So I found a section of the room and just plowed in! ("3B" indicates Tre Bicchieri winners, others received slightly lower rankings.)

As luck would have it, I sampled the Red of the Year first. The 2007 Vietti Barolo Villero Riserva (3B) had great, elegant perfume, was "really delicious," with bright, spicy red cherries and brick dust. Silky tannins, good acidity, looooong length and a chewy finish. ~$300. The 2011 Vietti Barolo Castiglione also had an elegant nose, and was tasty—very floral and very earthy—and integrated. ~$45. 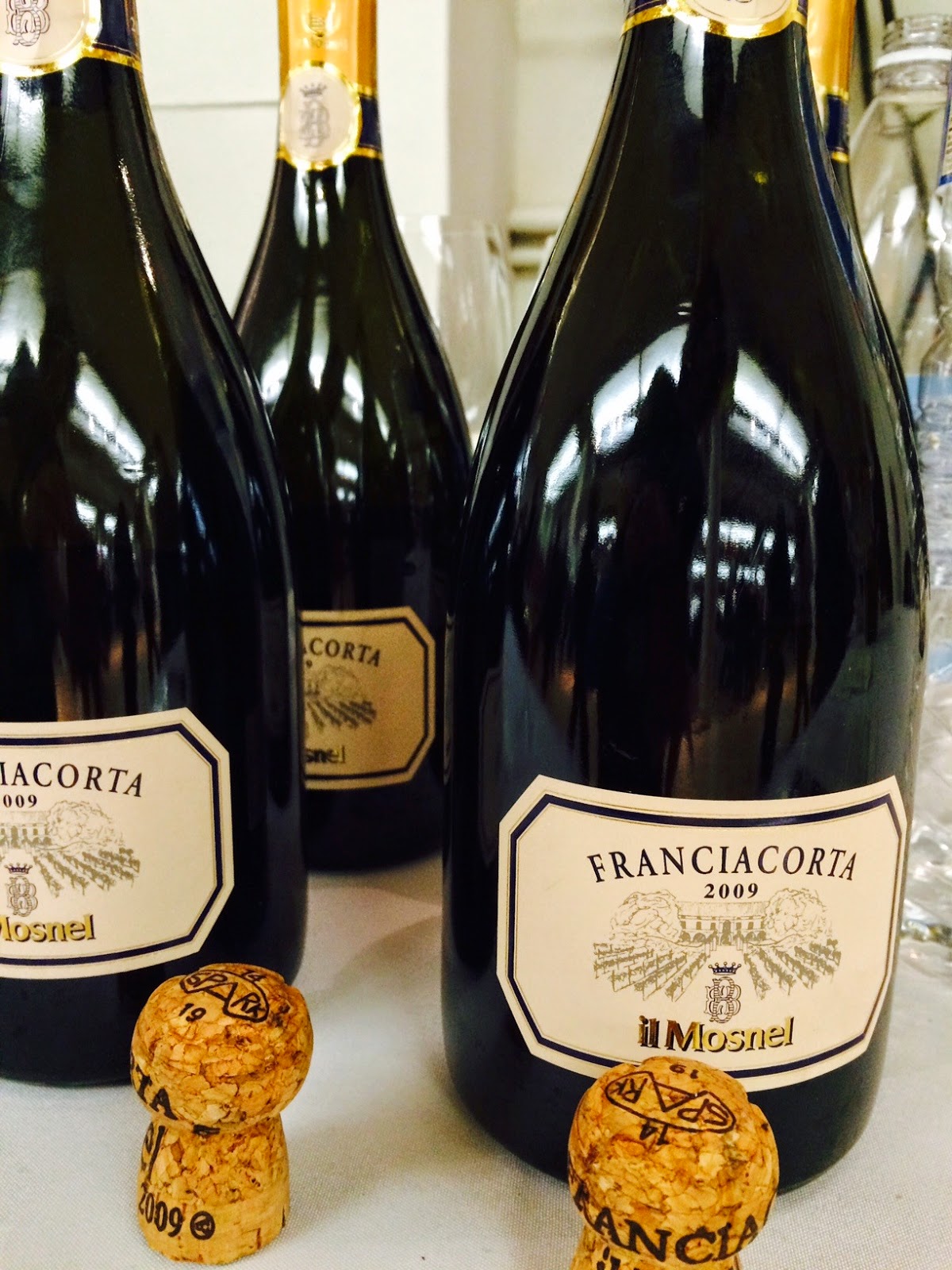 As a bubbly fan, I beelined for the 2009 Il Mosnel Franciacorta Extra Brut EBB (3B). It was very yummy/dirty/funky on the nose, with yellow apple, straw, and a good mousse—warm and rich and oomphy. ~$40. I also was intrigued by the 2013 Adami Valdobbiadene Rive di Farra di Solingo Brut Col Credas (3B). Pear jumped from the nose, with light lemon, minerals, and a bright mousse. Very steely, clean and metallic, cuts like a knife. ~$22. 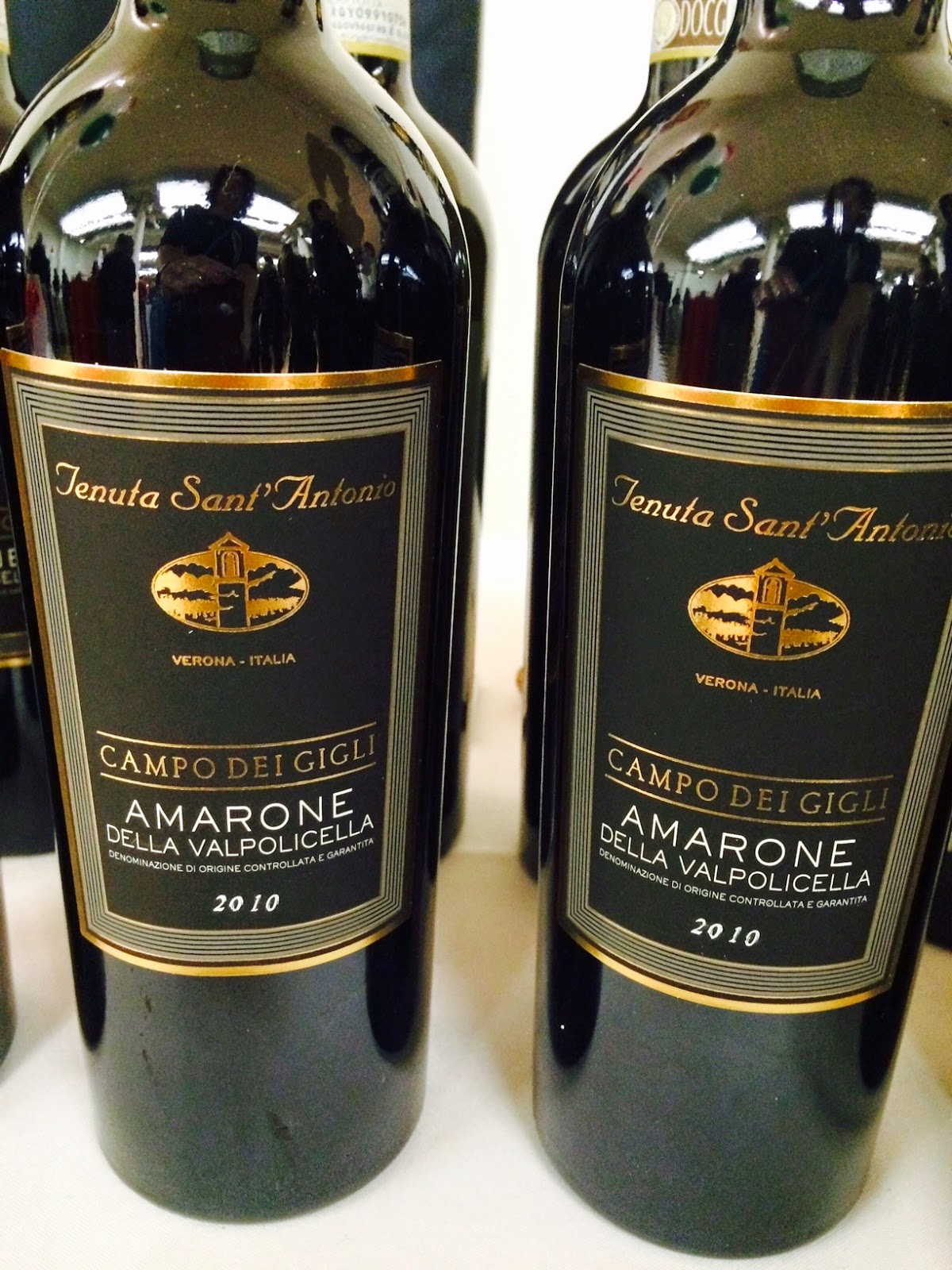 I also love Amarone (remember when I wondered if it was the Sexiest Wine Ever?) so sampled the 2010 Tenuta Sant'Antonio Amarone della Valpolicella Campo dei Gigli (3B). It had tons of black fruit, was very tasty (though maybe not as velvety as I'd hoped,) with good fruit and cola notes. Still very young—I'm prepared to give it some time! ~$75. 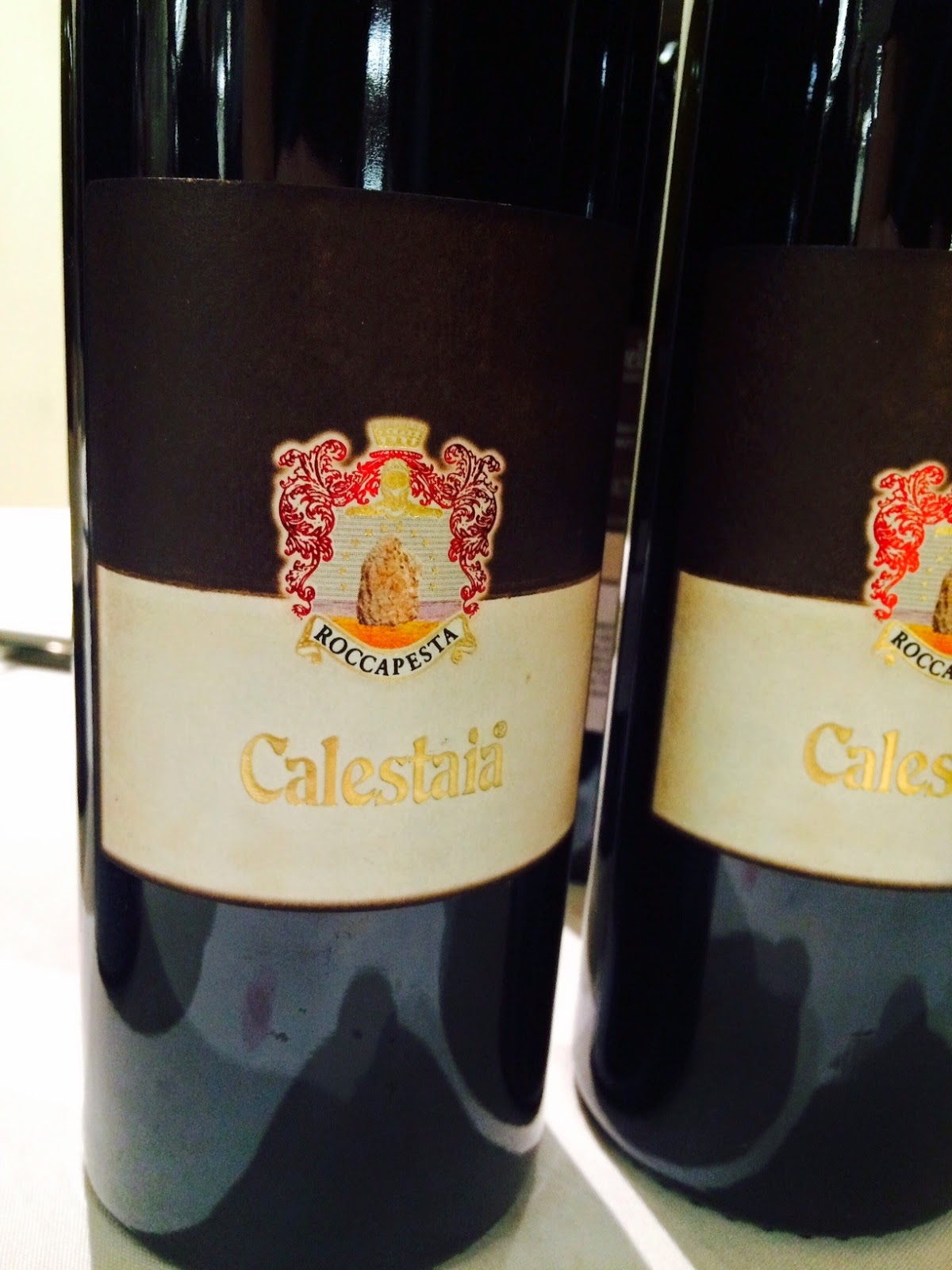 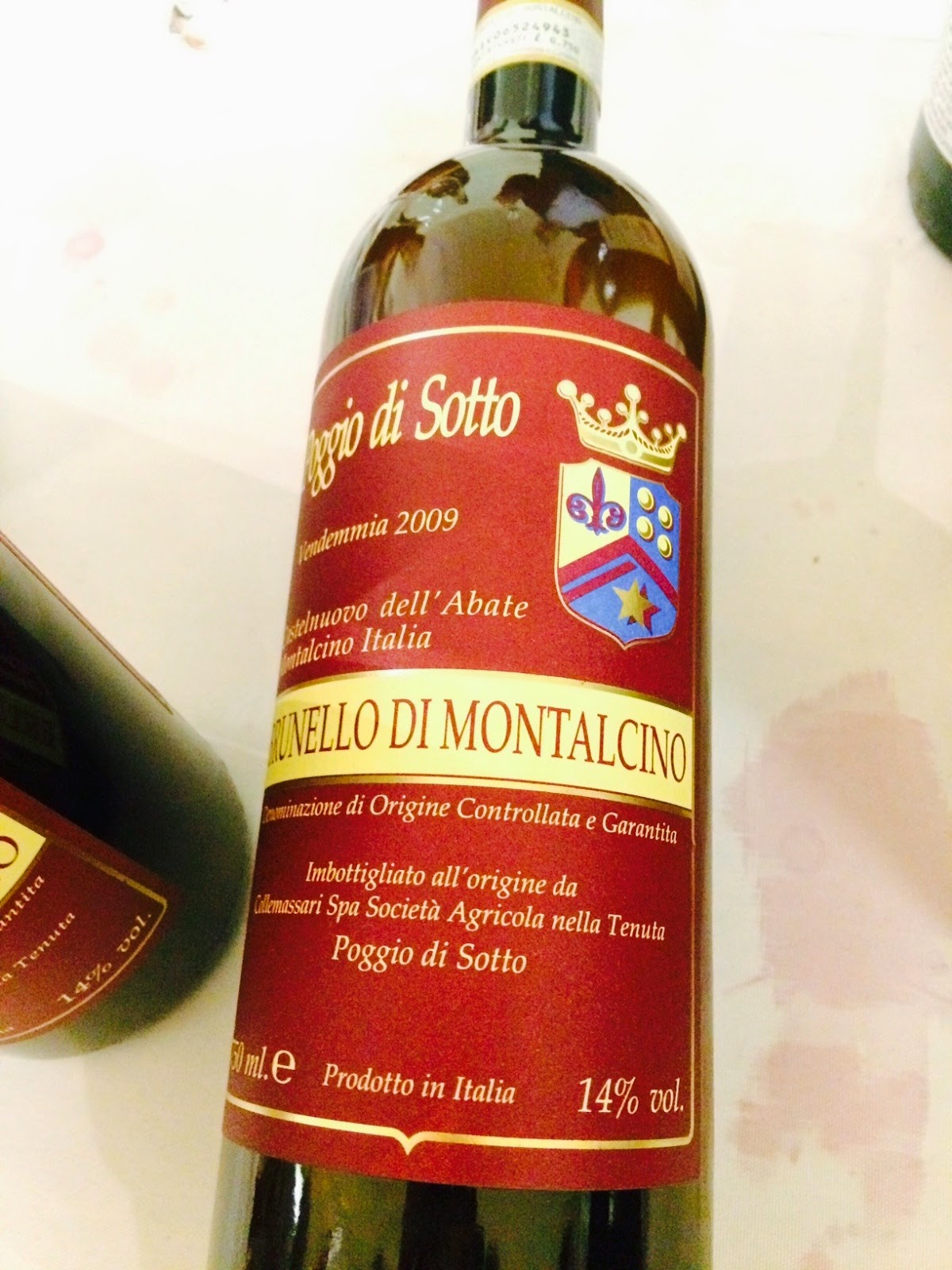 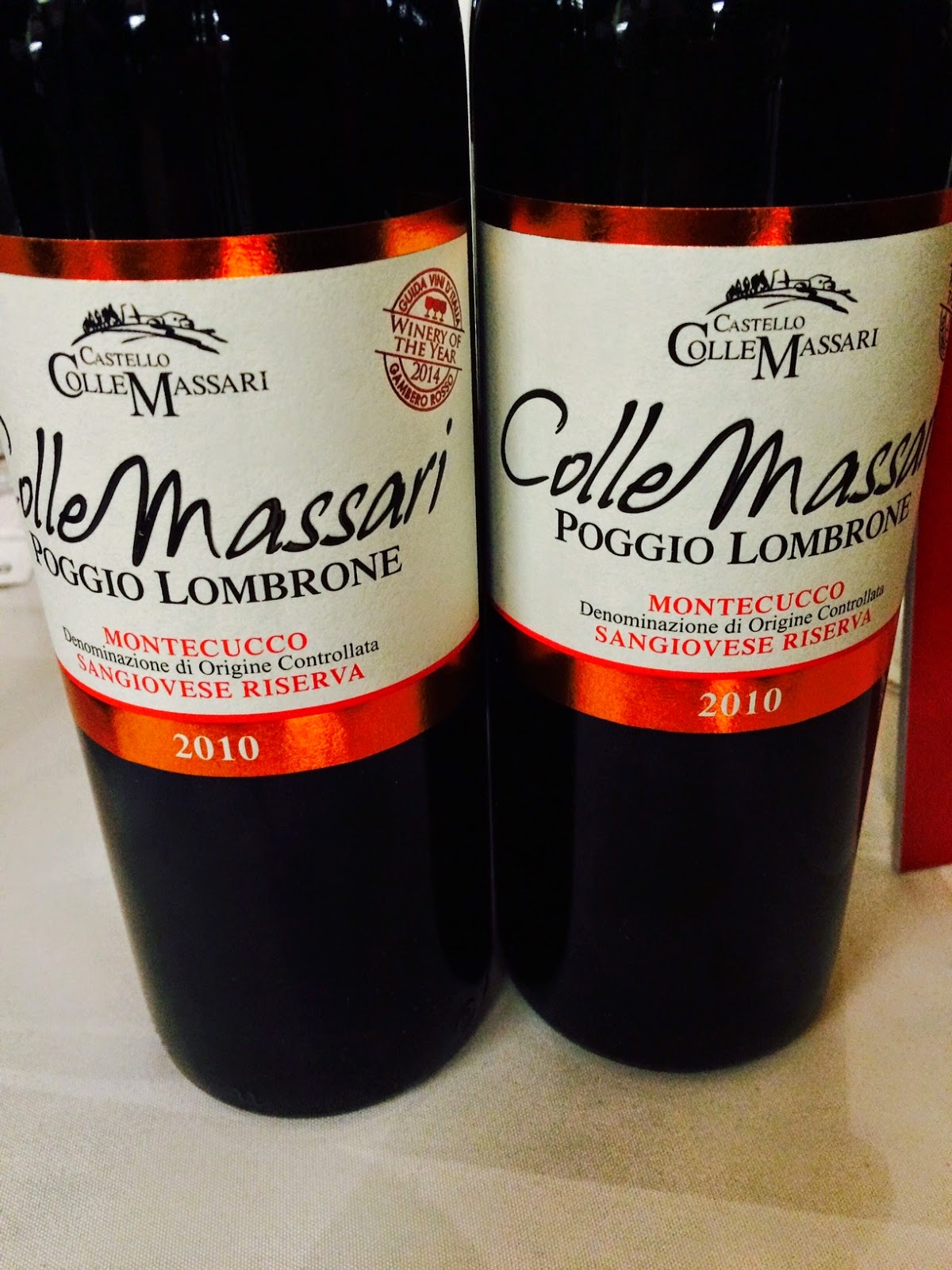 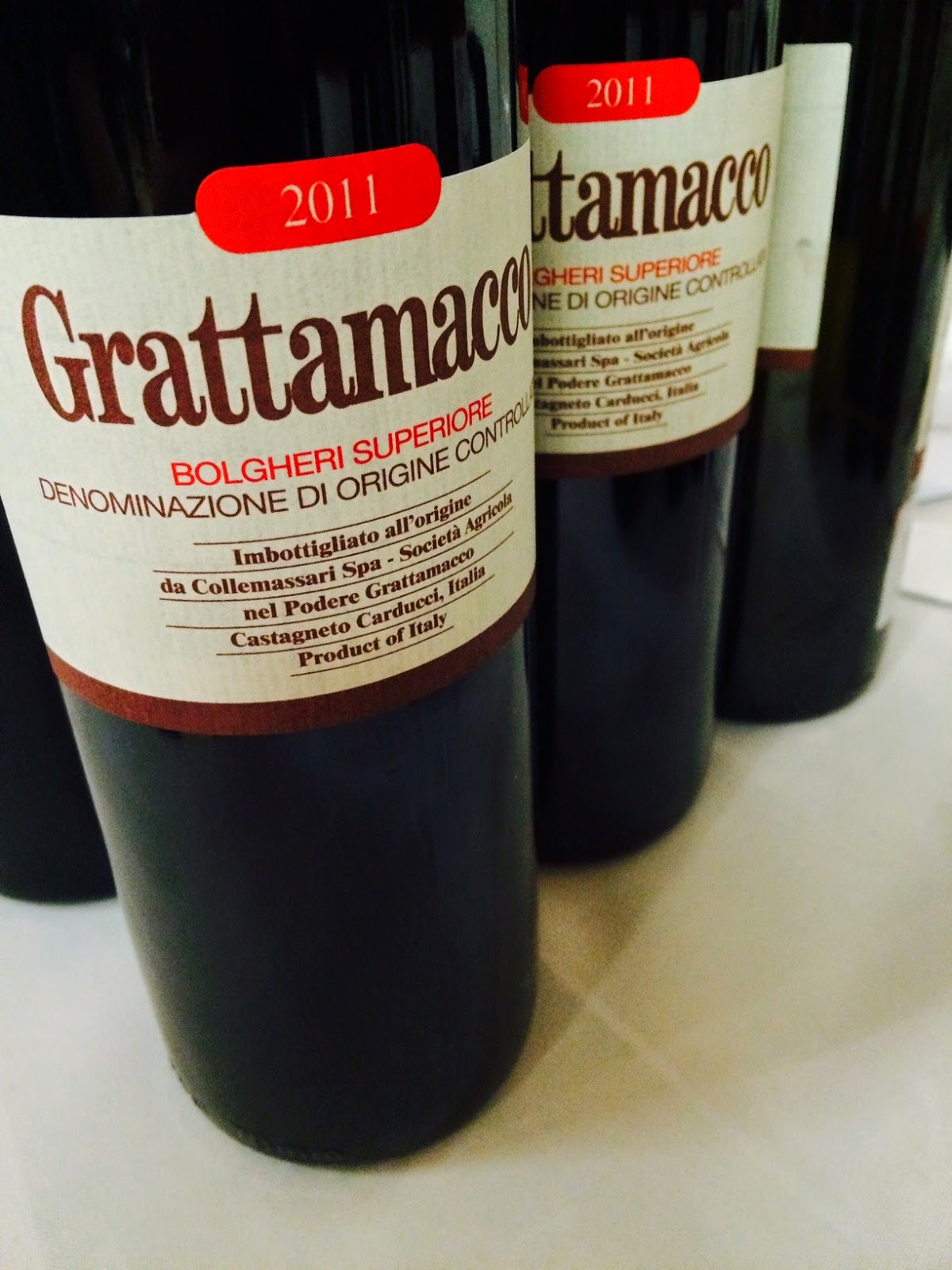 Some Chiantis from Tuscany tasted next included the 2011 Barone Ricasoli Chianti Classico Colledilà Gran Selezione (3B) with a most amazing nose! Very unusual: brick dust, crushed lavender, red plum, red currant. Lots of structure and intriguing on the palate, but the nose was the best. ~$55. And the 2011 Brancaia Chianti Classico Riserva (3B) showed ripe red fruit on the nose, with red and black fruits (supported by 20% Merlot in the blend, no doubt,) with herbs and a pizza-spice-y finish. Tasty. ~$30. 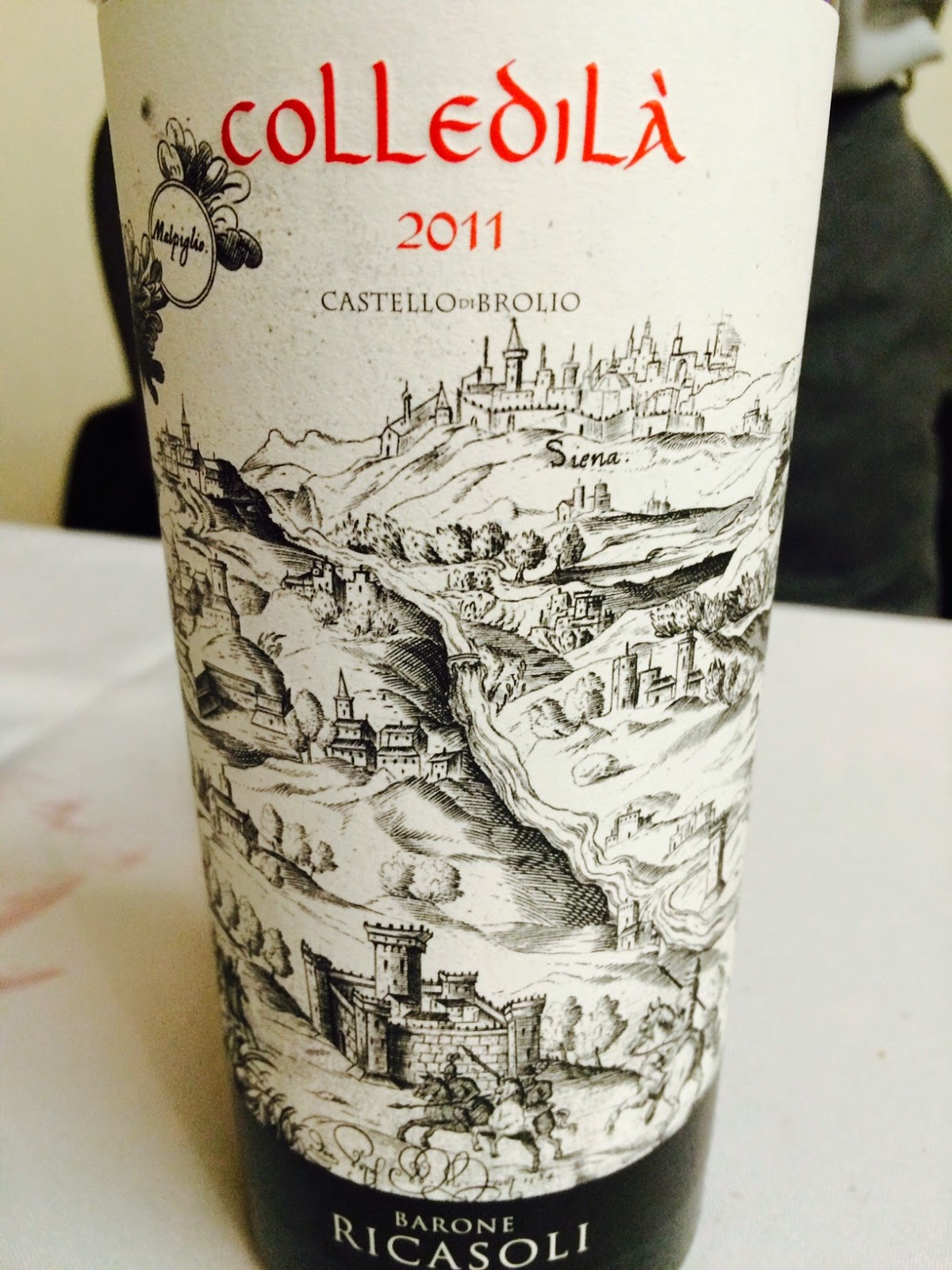 At this point in my tasting, I met up with some friends: Mr. Some Damn Good Wine, Mr. Tolerant Taster, and Mr. NJ Wine and Beer (not every Wineau has a catchy name, but I guess the folks who do tend to gravitate to each other. [You can follow all these wacky Wineaux on the twitter, lose the "Mr."s and look them up!]) Our newly-formed Posse bounced around to some more tables, increasing the zany quotient by a factor of ten. 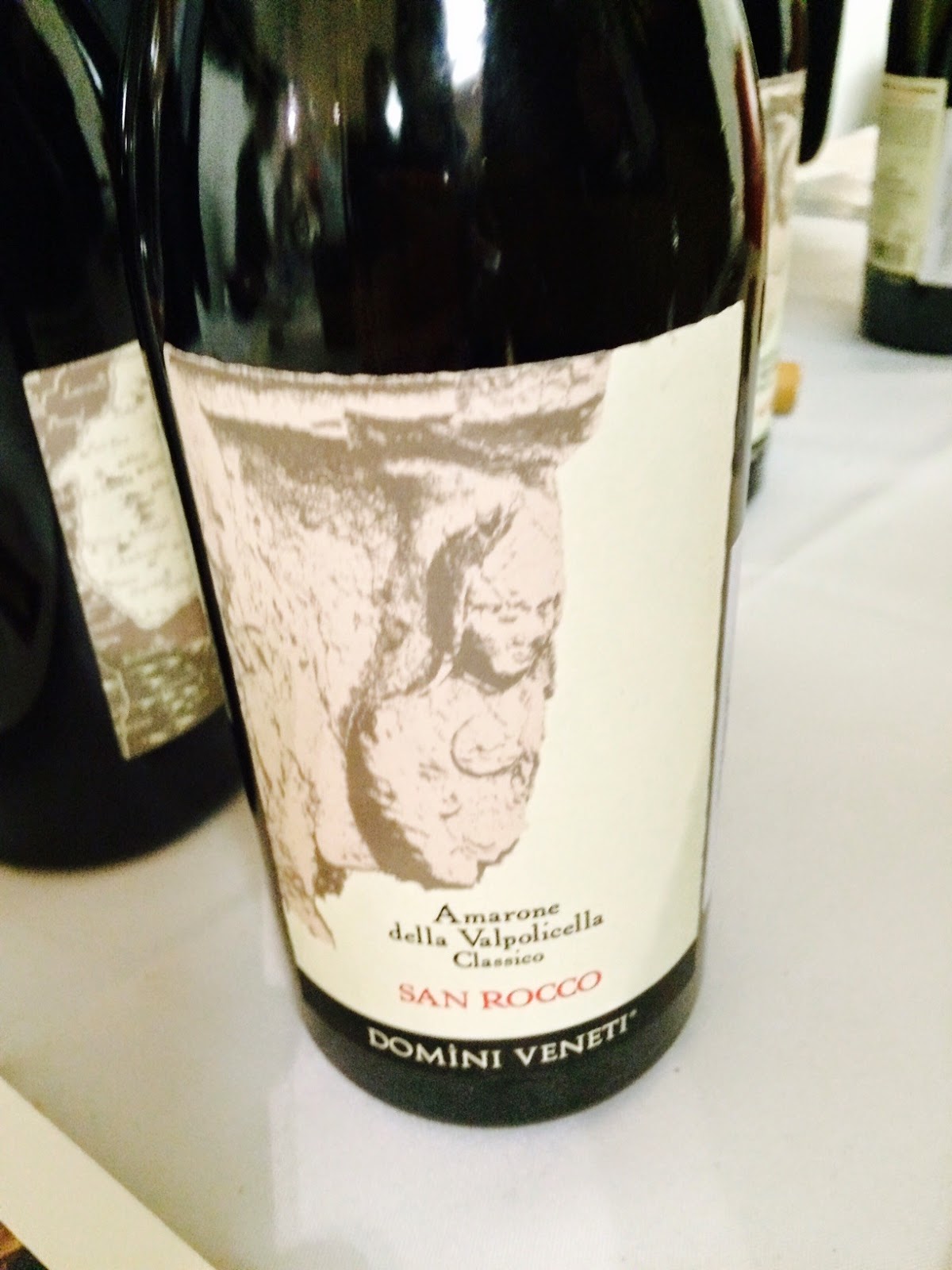 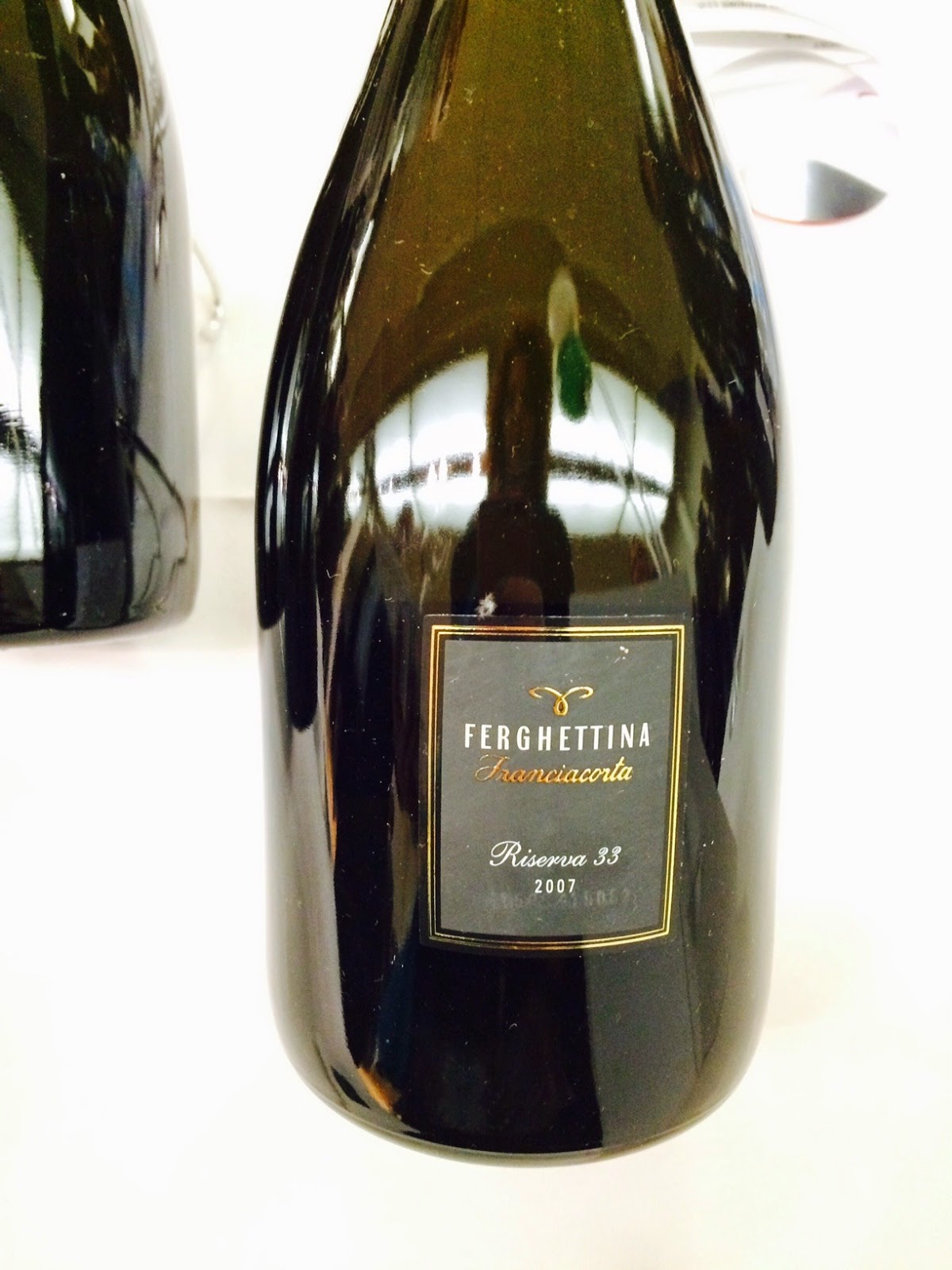 Back up to Lombardy and Franciacorta again, for the amazing 2007 Ferghettina Franciacorta Pas Dosé 33 Riserva (3B). Soapstone, lemon curd, honey and yellow apple on the nose, very crisp and clean, minerally, bit yeasty (72 months on the lees, so!) Very nice, very tasty. ~$48 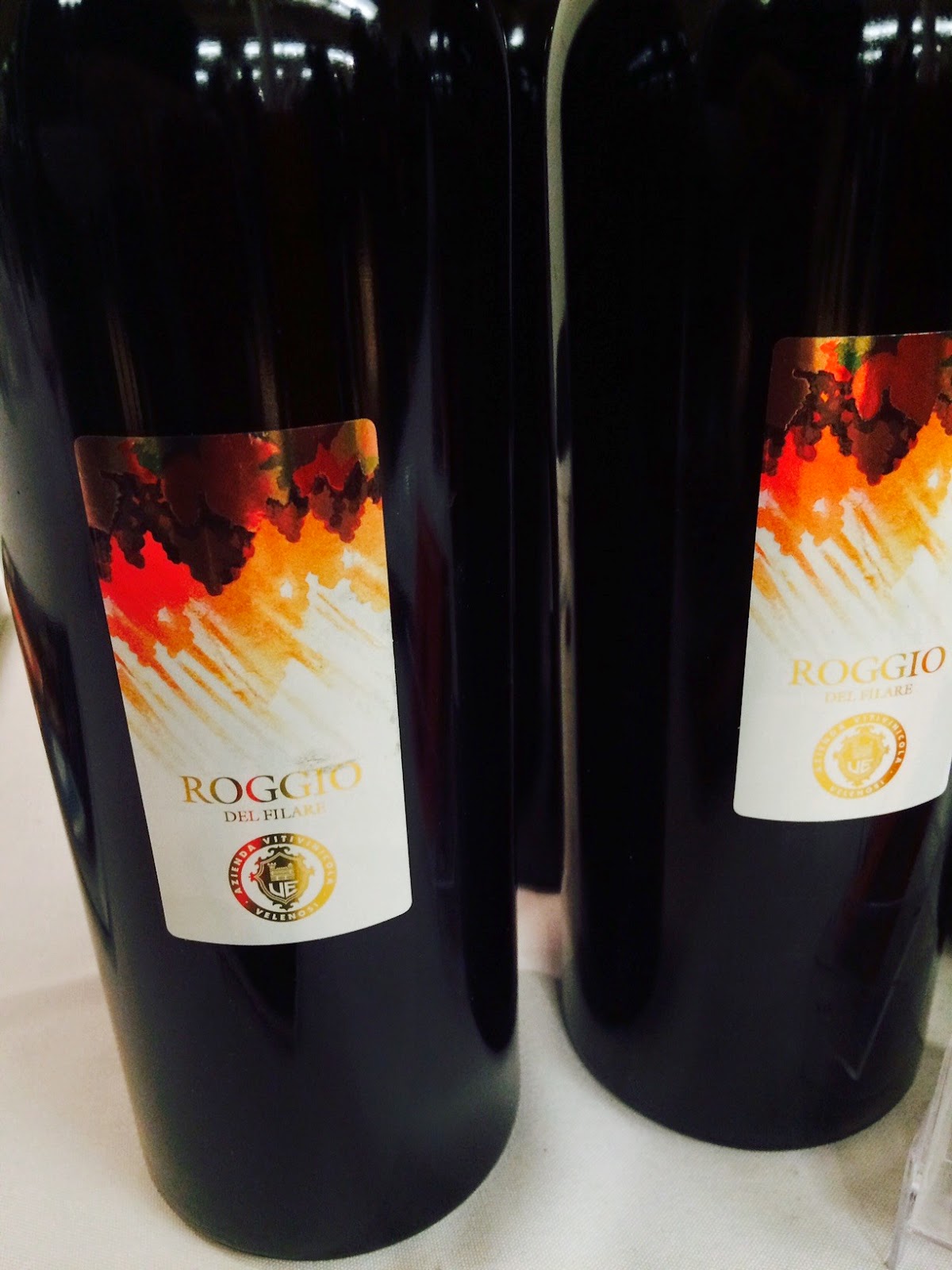 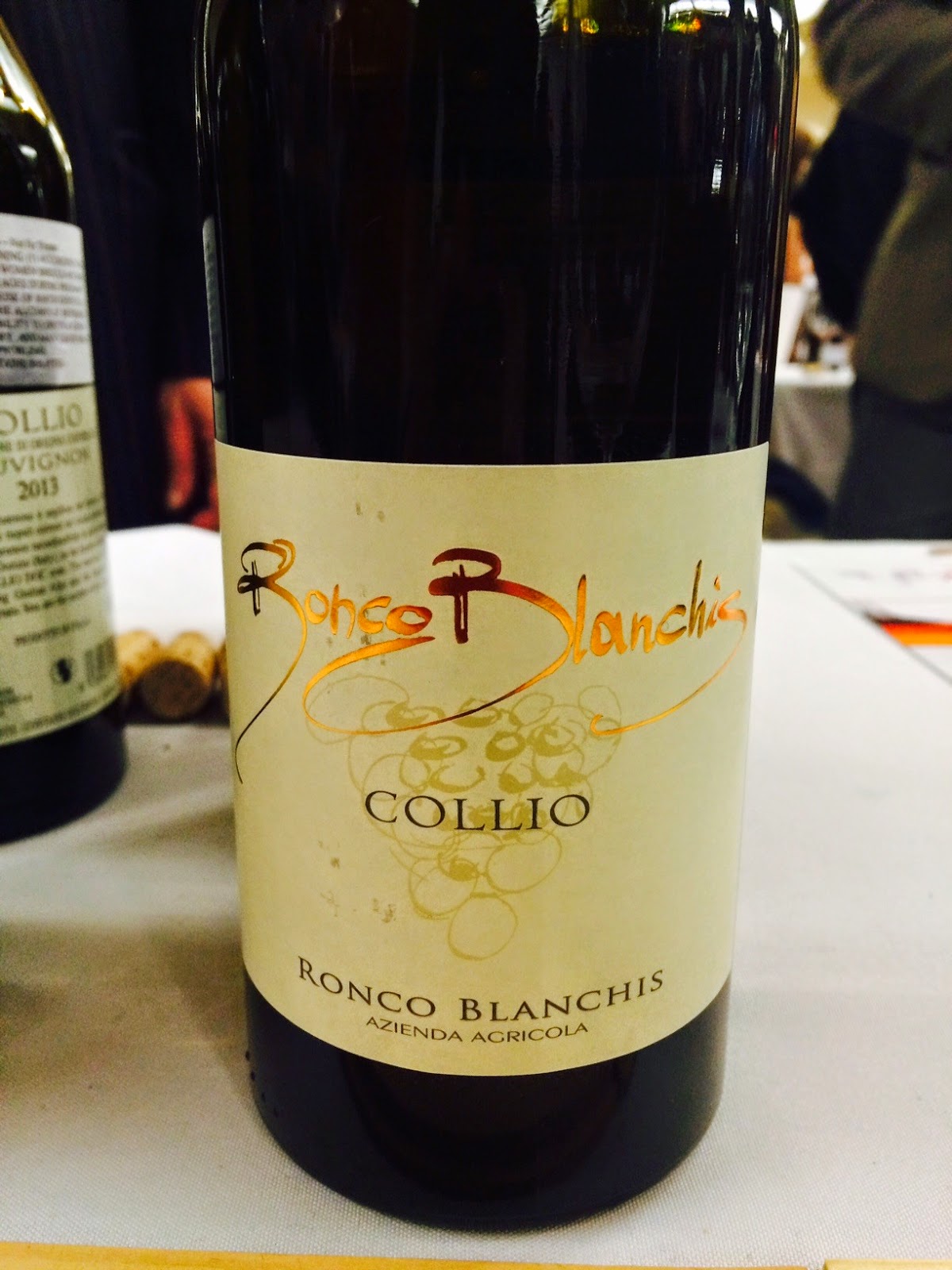 Back to white, back to Collio for the 2013 Ronco Blanchis Collio (3B)—spicy!! A true multitude of spices. Warm, round melon and... spice galore. ~$20. Although familiar with Gavi wines, I hadn't yet tried the 2012 Villa Sparina Gavi del Comune di Gavi Monterotondo (3B) which had delicious melon, litchi, great round fruit, and good minerality. Yum. ~$50. 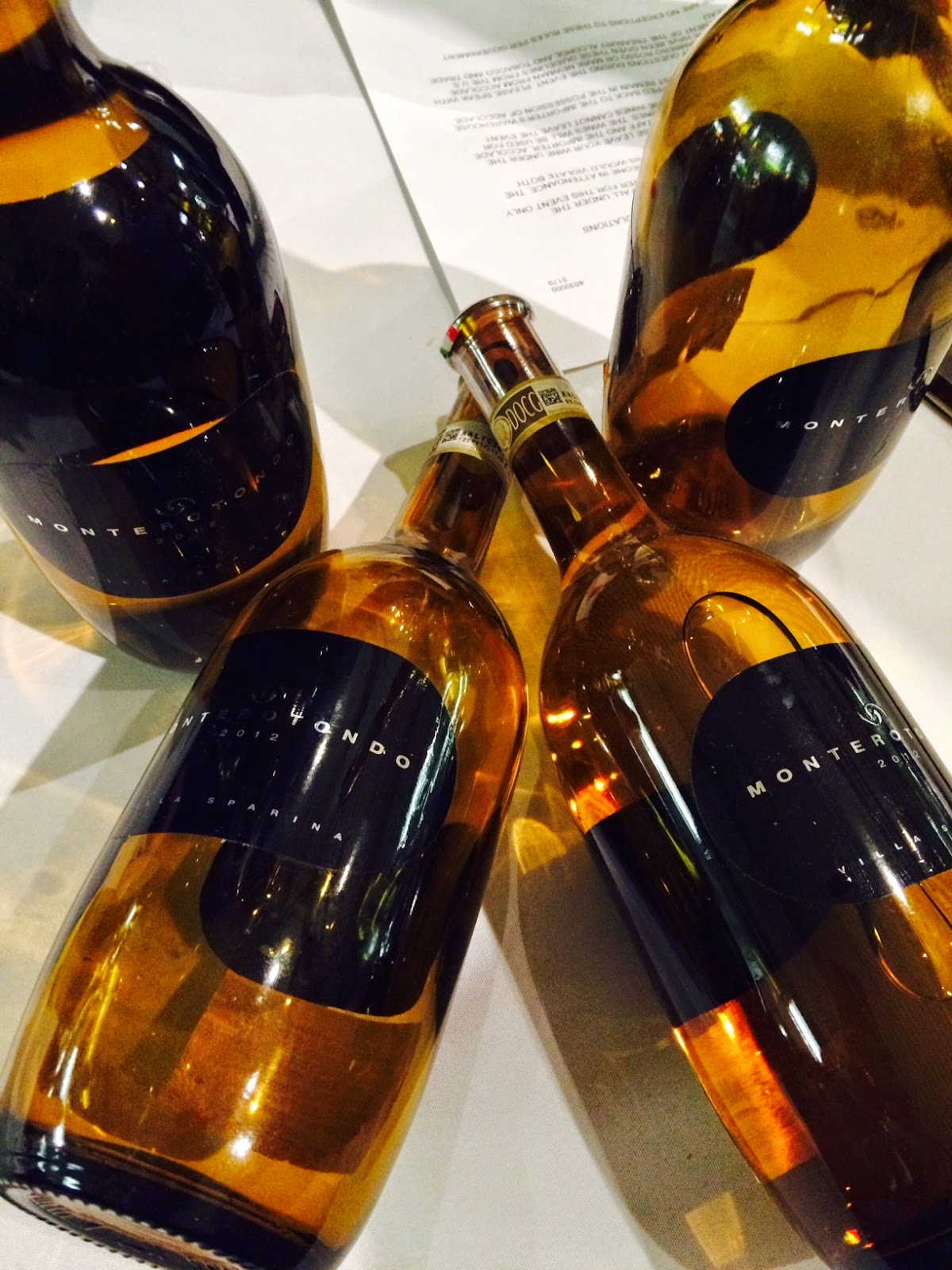 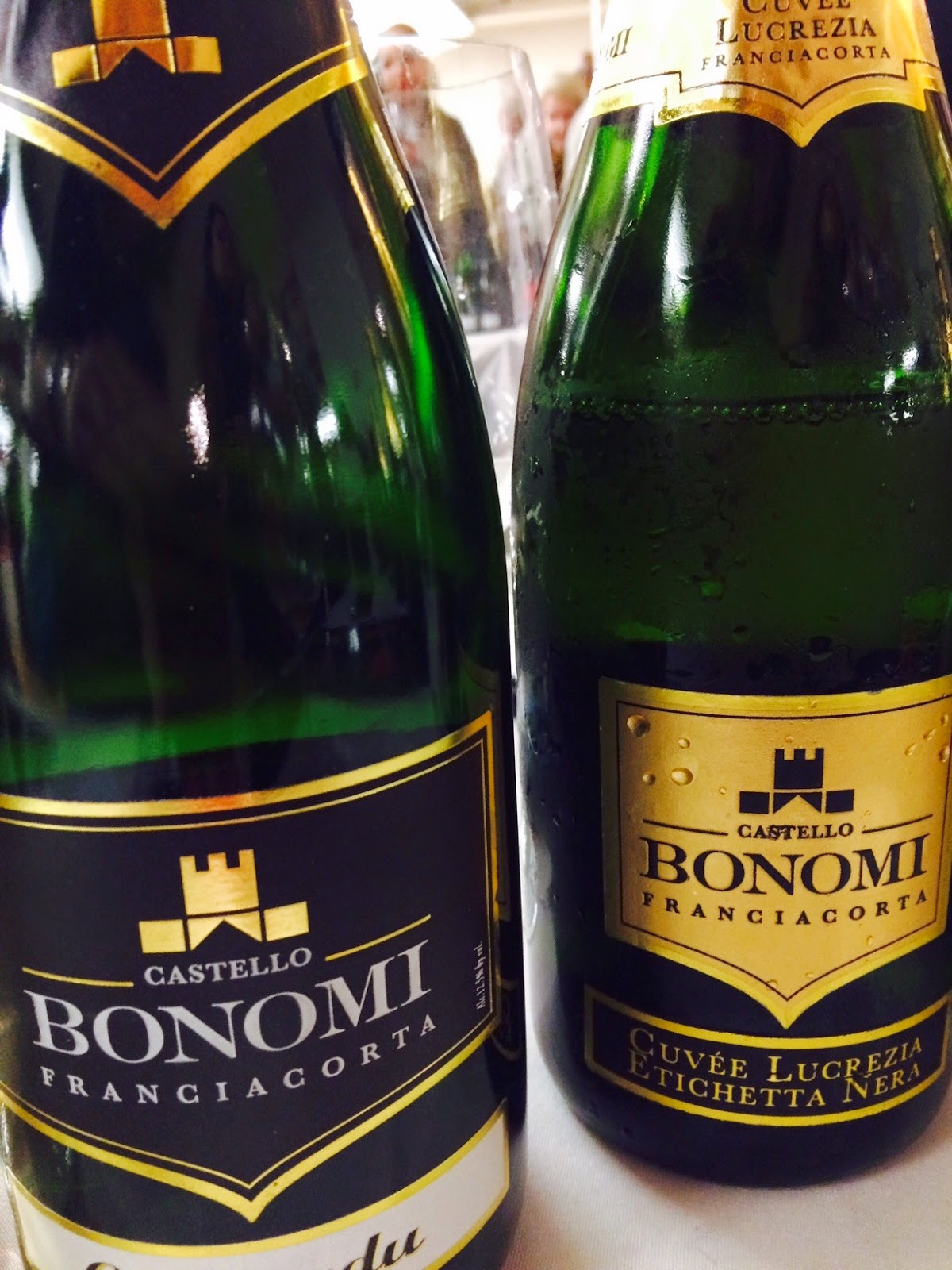 Mr. NJ Wine and Beer and I accidentally left the other two in the dust zooming to the other side of the room to find an old friend, the 2010 Allegrini Amarone della Valpolicella Classico (3B). With a grappa-ish, herby nose, and "sweet" fruit, it presented a little too baked for me, alas. Maybe next time! ~$42

I had to fly to a meeting with another Wineau, so bid the remainder of my Posse adieu (or, ciao,) and headed out into the cold with a little Italian zaniness in my step. While I felt like I may have missed some real gems in all the chaos, I was thrilled at the numerous wines I did discover. With the incredible range of wines coming out of all corners of Italy, there truly is something for everyone—so grab three glasses of your own, split a bottle with some friends, and dance the zany night away.


Posted by Annie Edgerton at 3:08 PM No comments: 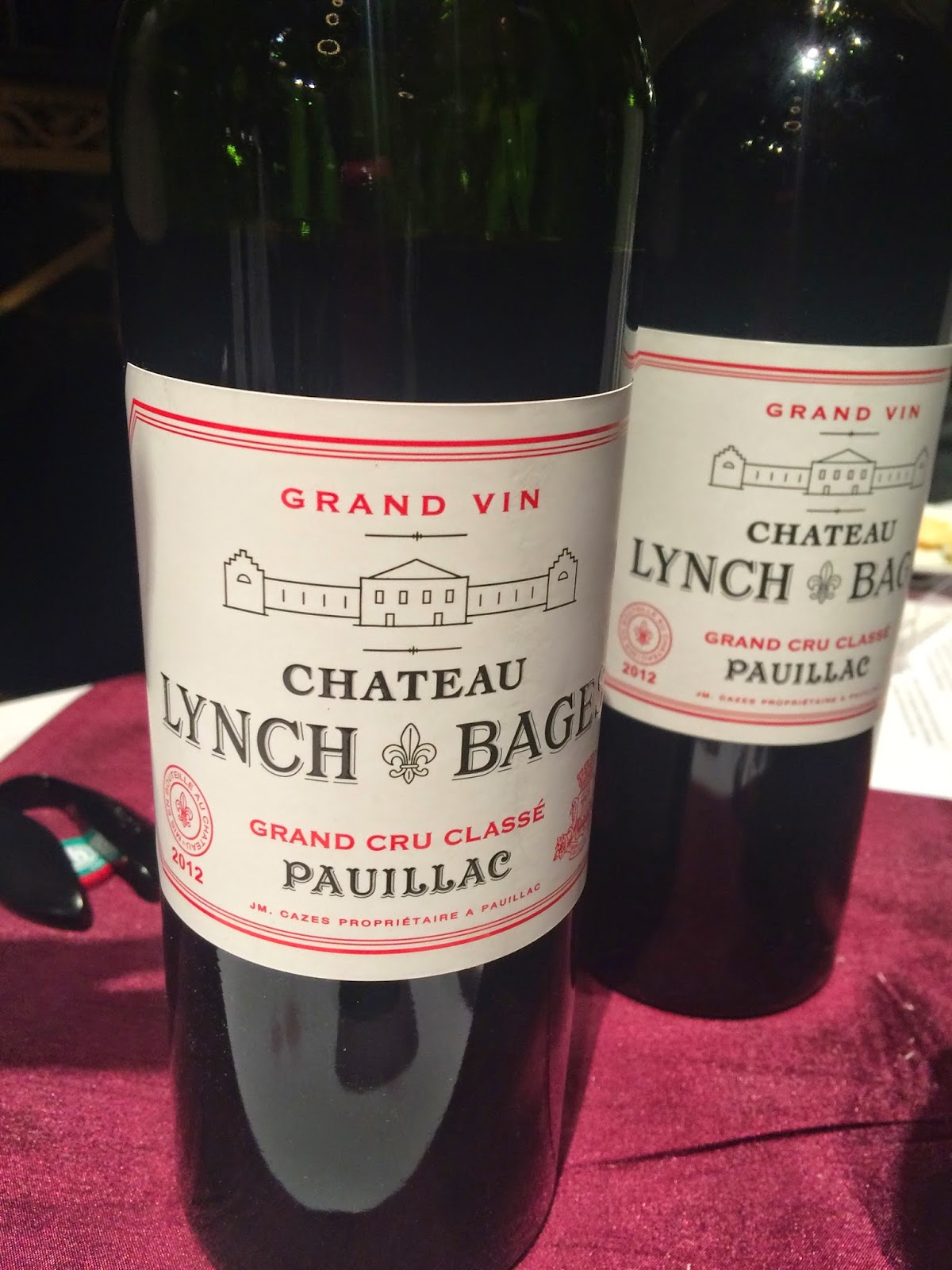 Last year I wrote that the 2011 Bordeaux offerings provided some gems if you were willing to take the time to unearth them. Well, Wineaux, prepare yourselves for some serious mining in regard to the 2012s.

Many high-end, famous critics (who get to attend the En Primeur tastings in Bordeaux) seem to agree that 2012 had quality issues much like 2011, and neither vintage was helped by the fact that 2009 and 2010 were stunning vintages all around. In 2012, ripening of the Cabernet Sauvignon was problematic, and Sauternes lost most of its crop to bad weather just before harvest. The dry whites fared well and the Merlot-based reds were salvageable, but 2012 will not be a vintage to remember, or to save.

However, this means something generally not a rule in Bordeaux: the 2012s will be far more accessible early on than those from the opulent vintages.

On a very snowy winter's day, I attended the Union des Grand Crus de Bordeaux tasting, which showcases 95 respected producers from all over Bordeaux. Generally I was not overly impressed with the offerings, although I managed to find one or two Châteaux from the different regions whose wine stood out amongst its peers. (Something to bear in mind: given the unpredictability of the vintage, many of these wines that are showing too tart or one-dimensional may almost certainly evolve in the bottle, and relatively soon, so while some show obvious potential now, others may yet surprise us.)

WHITE:
Ranged from acidic and bright Sauv Blanc-driven wines,
to rounder, richer offerings buoyed by more Sèmillon in the blend. 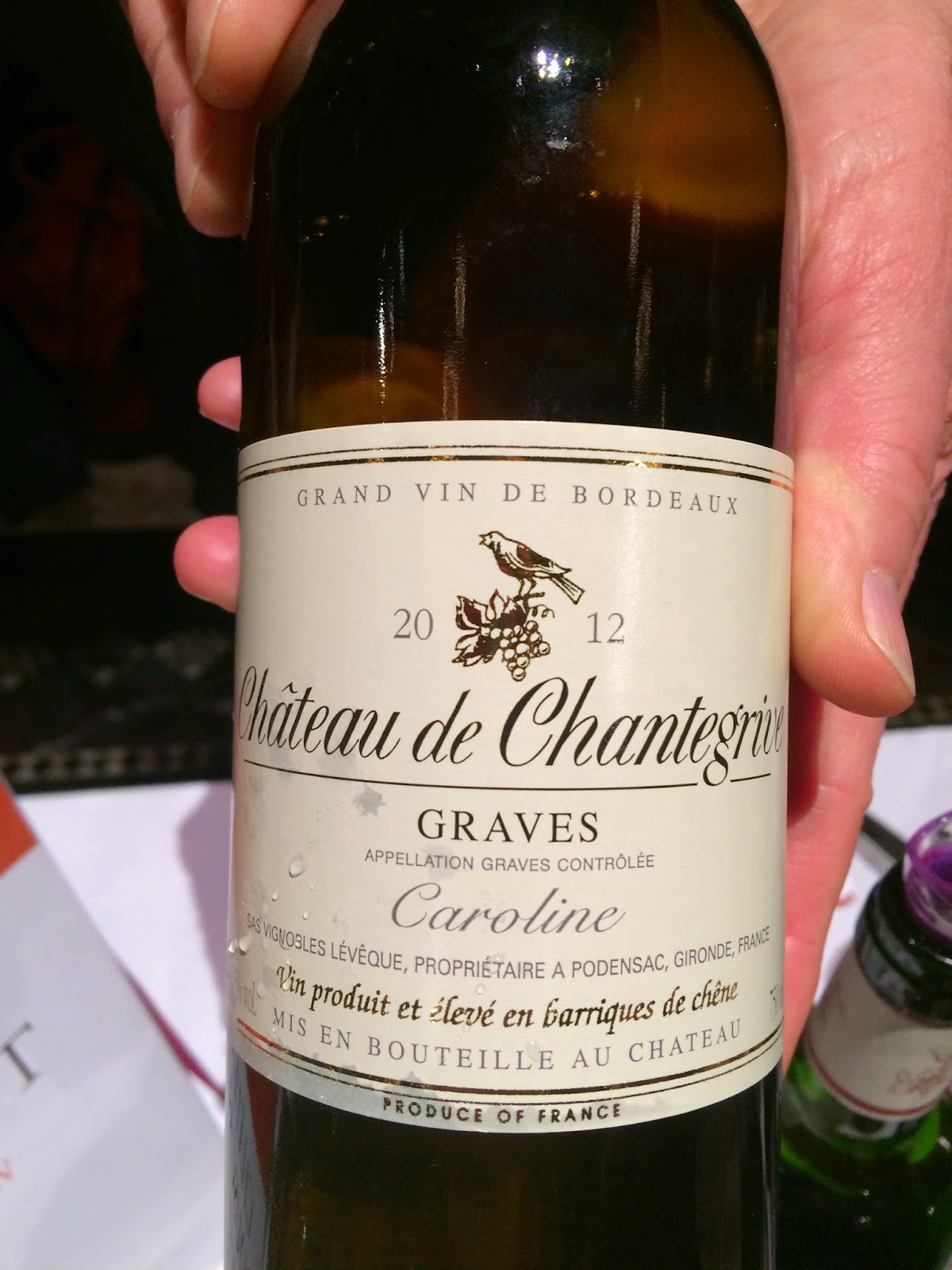 2012 Ch. de Chantegrive Blanc: Amazing nose, ripe pear and peach, quince, SweeTarts. Very "sweetly tart" in the mouth, excellently balanced acid, but the word for sure is TART. Liked it though. TOP White. ~$22

2012 Ch. Bouscaut Blanc: 60% Sauvignon Blanc, 40% Semillon; really get the Semillon on the nose, and in the body. Rich and viscous, nice spice on the finish, warm and luxe, very well-balanced. ~$35 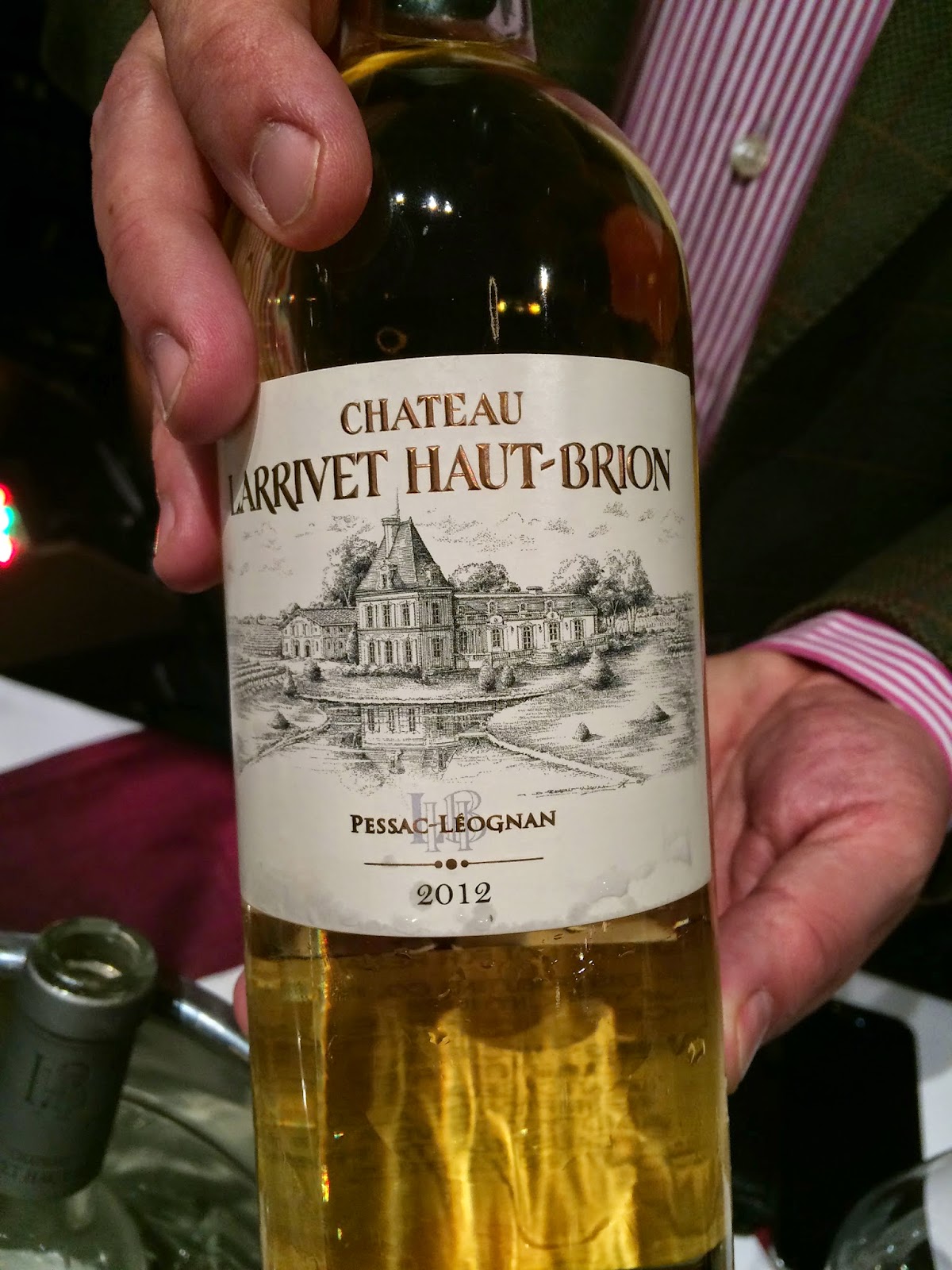 SAINT-ÉMILION:
You will see the St.-Éms were very categorized by tart red fruits,
in some cases, so tart as to be off-putting. 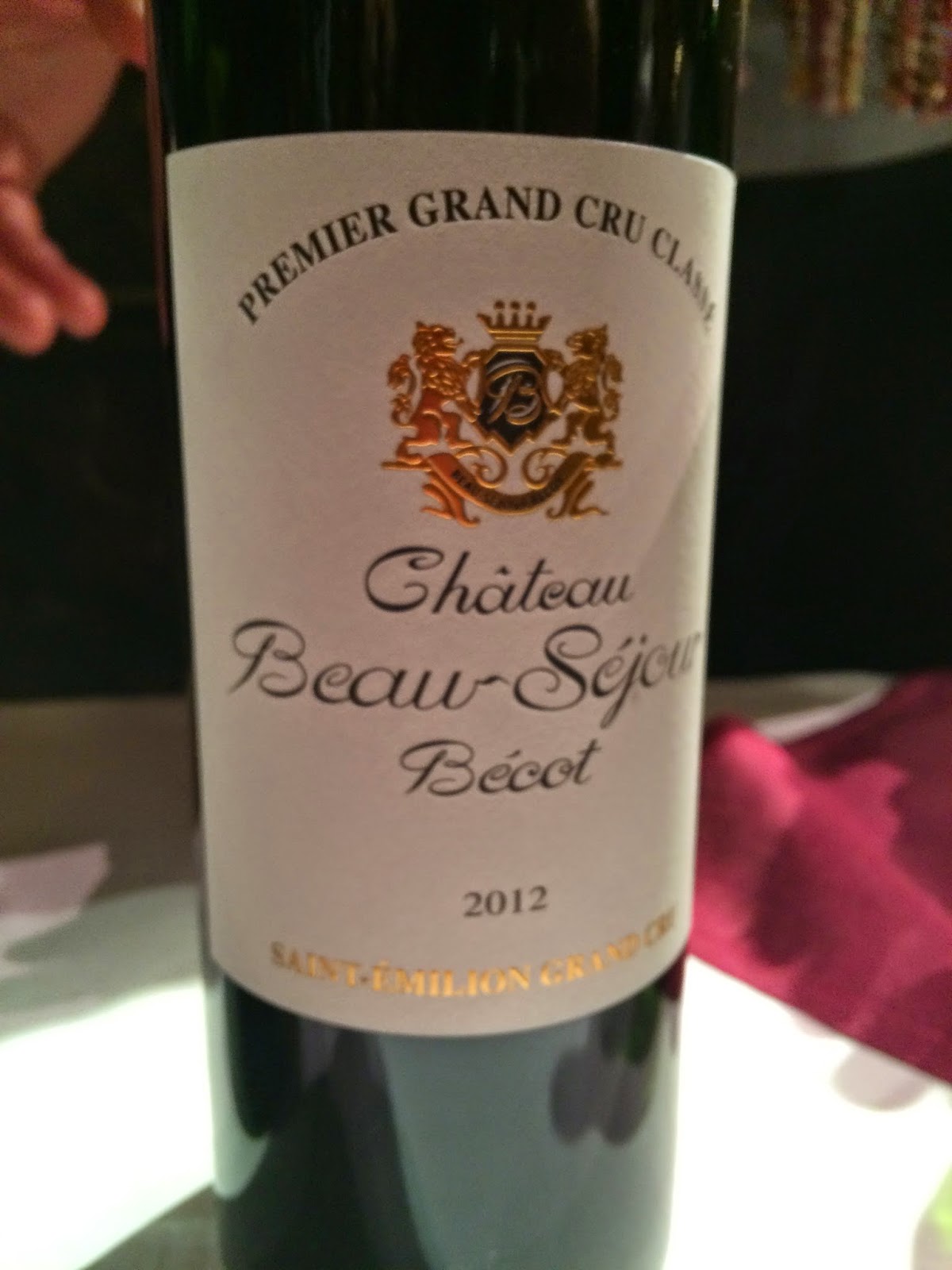 POMEROL:
In Pomerol, the tartness of the red fruits was tempered a bit
by earthiness and similar flavors. 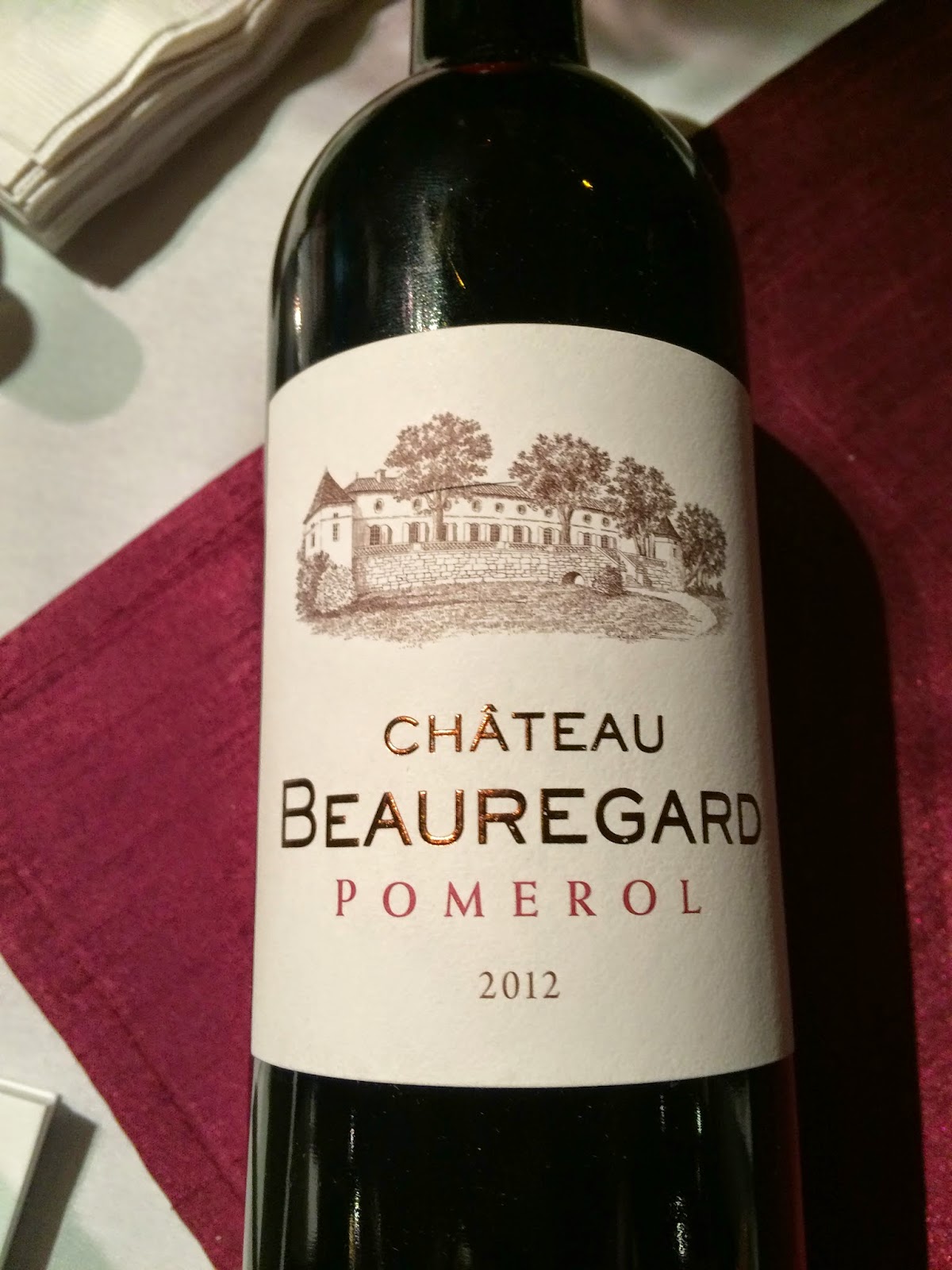 MÉDOC:
Many wines from the large Médoc appellation seemed to have
a good "multi-faceted-ness" and are outrageously EXCELLENT values. 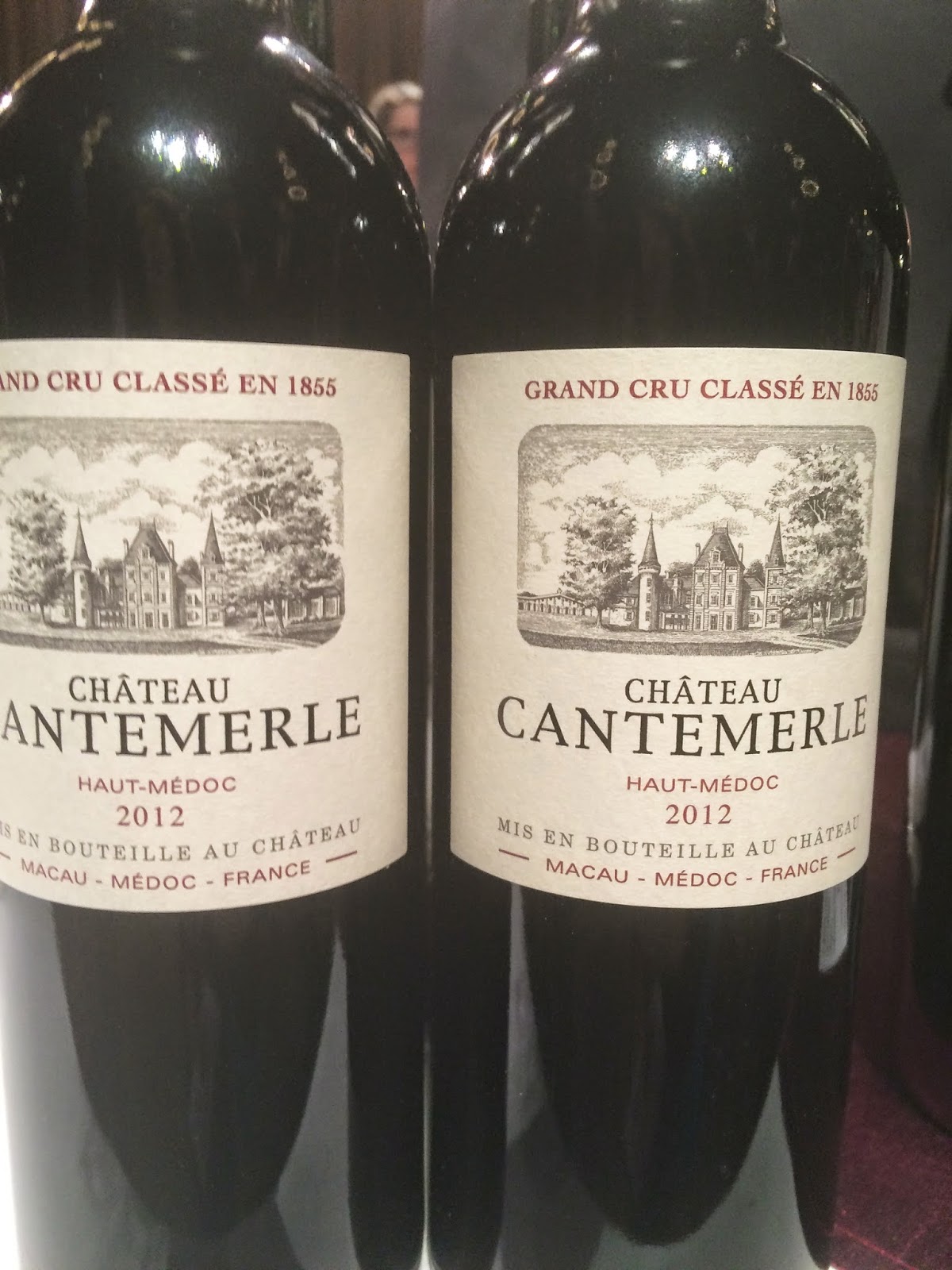 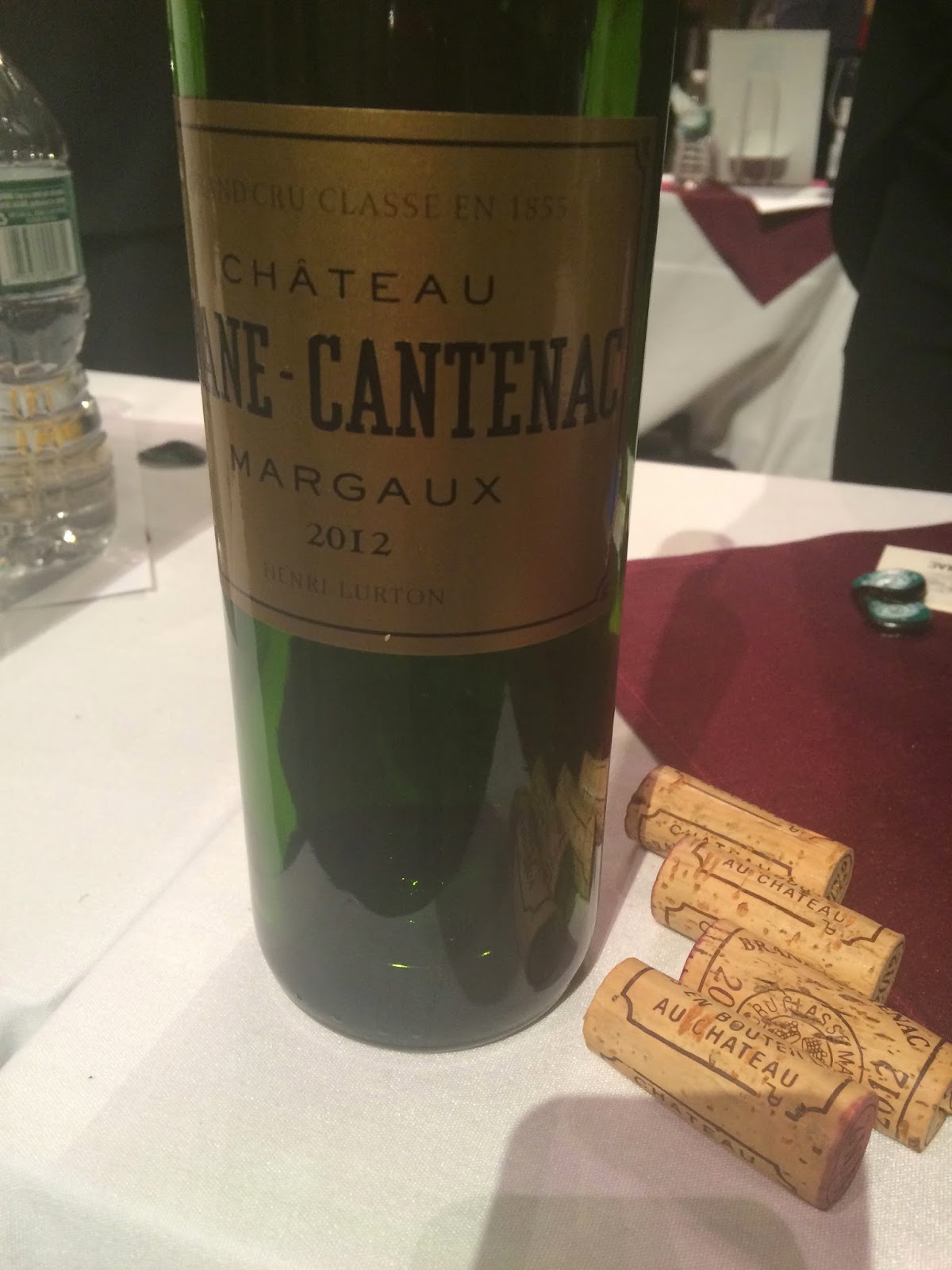 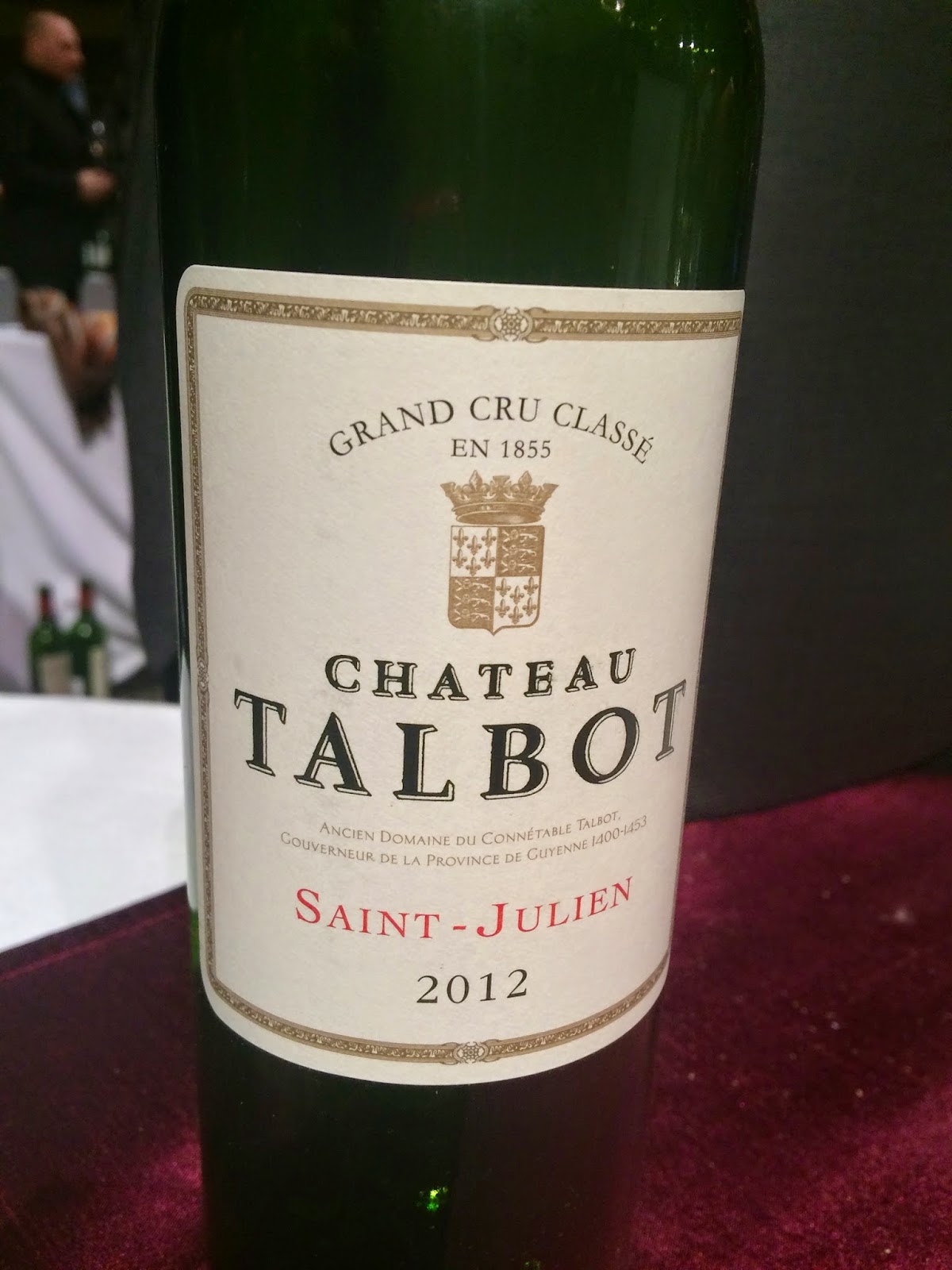 2012 Ch. Gloria: Nice, interesting umami nose. Not that much fruit expression—chalky tannins kind of rob it of fruit. ~$36

2012 Ch. Léoville-Barton: Herbs and floral nose, nice fruit. Lots of green pepper in mouth. Solid, but not my style. ~$70

PAUILLAC:
Pauillac, like Margaux, seemed to hold a lot of potential. 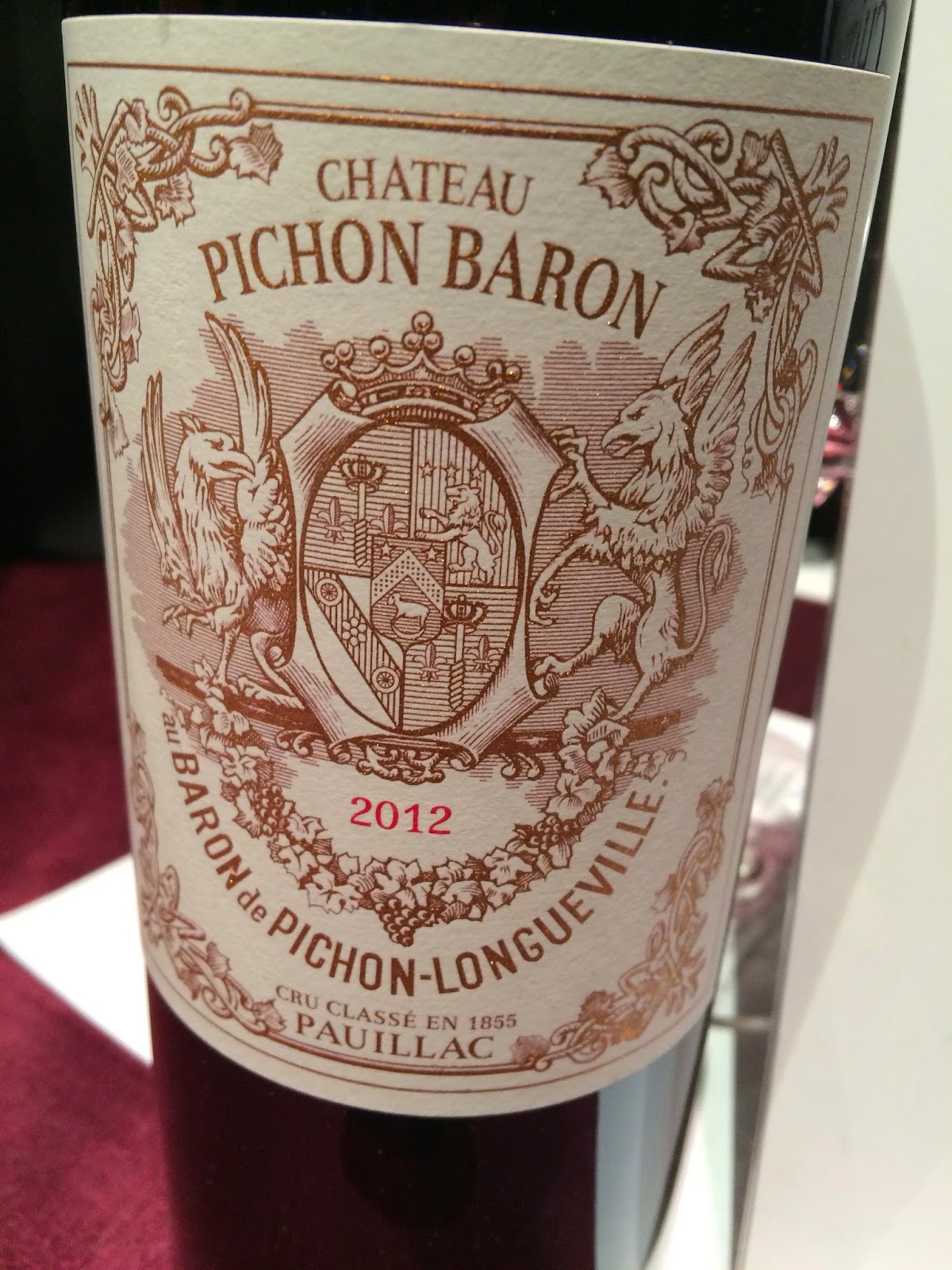 (With the storm outside a-ragin', I wrapped up my tasting by beelining to the dessert wines. Alas, that meant I missed the three St.-Estèphe offerings, not to mention so many wonderful Châteaux from the regions I did sample. Oh well, no time to cry over missed wine!)

DESSERT:
Sauterns and Barsac ranged from too light to too cloying,
but still had some personalities shining through. 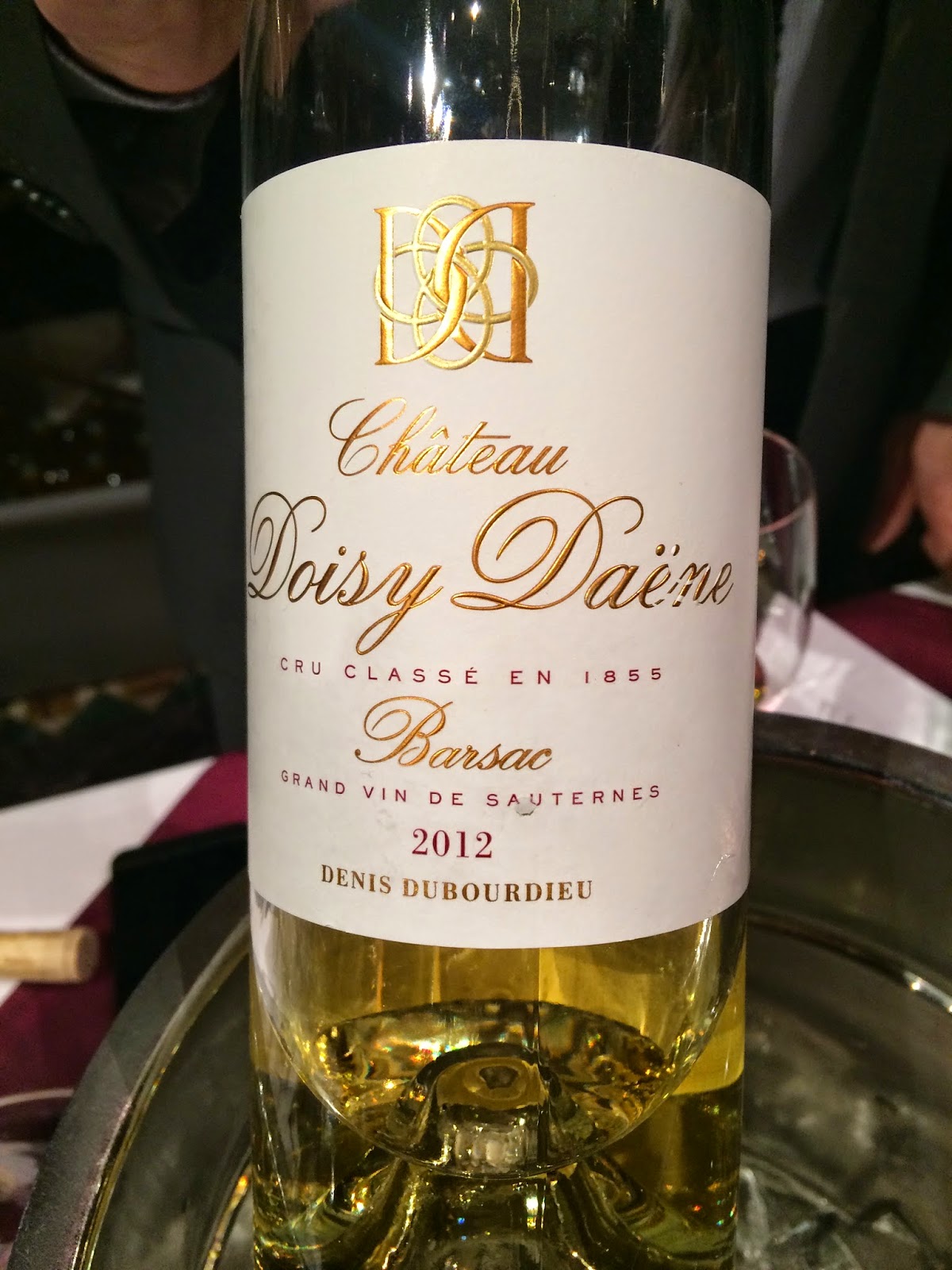 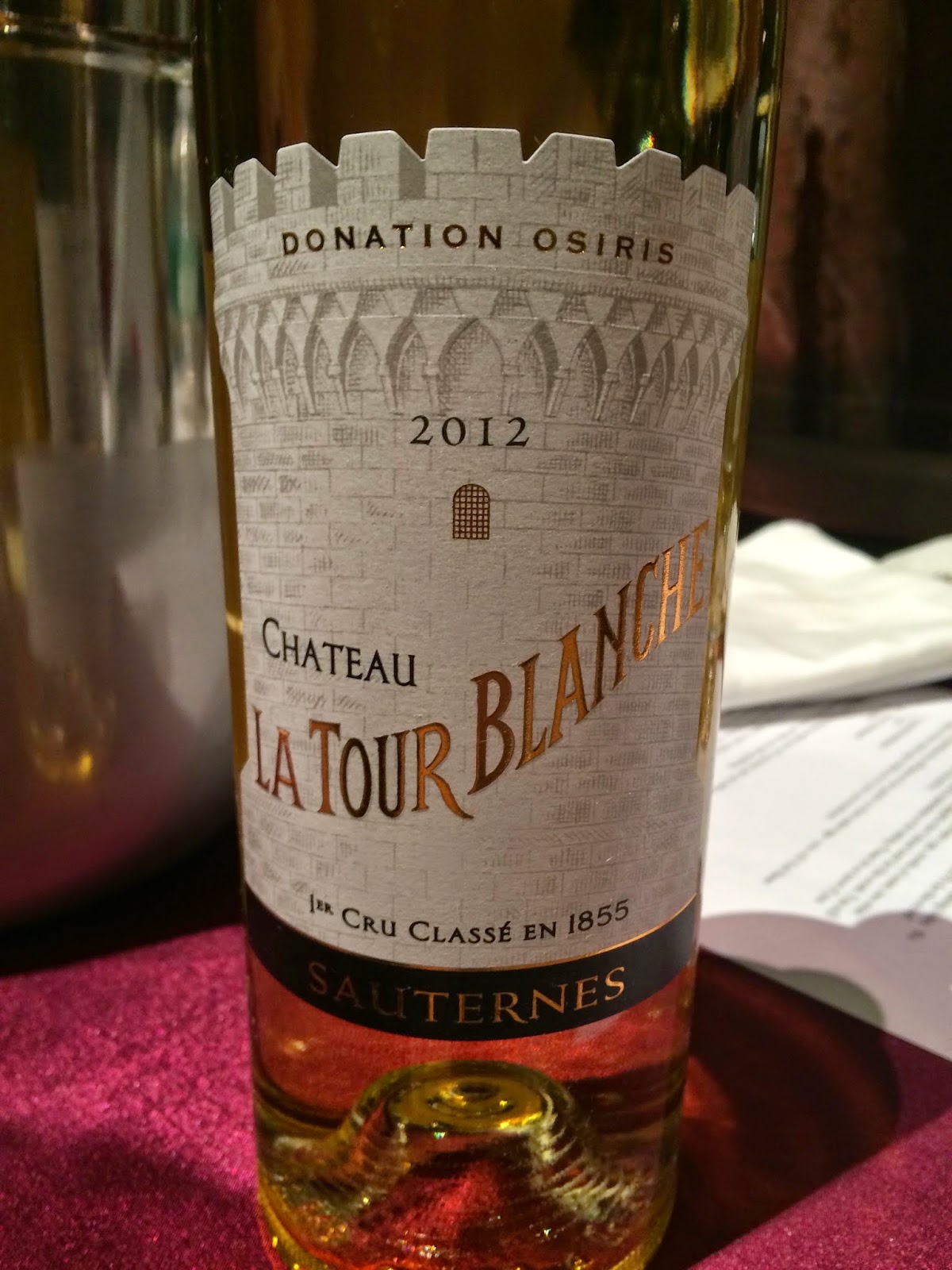 2012 Clos Haut-Peyraguey: Honey, apricot, honeysuckle. Very tasty, round and rich, but not enough acidity to balance = too syrupy. ~$55


So there you have it, Wineaux. You major Bordeaux-lovers may just have to write off 2012—alas, the early reports on 2013 are also spotty—but while we wait for the "next big vintage," talk to your merchants and somms, and I bet you can find a decent bottle or two to enjoy in the meantime. To look on the bright side, unearthing the good 2012s will give you accessible Bordeaux at a relatively affordable price… it's still one of the world's best wine regions for a reason.

Posted by Annie Edgerton at 2:06 PM No comments: