I recently wrote about my visit to Lisbon, Portugal, and some wineries I visited in its nearby wine regions of Colares and Setúbal. (< Follow the links to the articles.) Chronologically, my visit to Bacalhôa in Setúbal should have been written up next, but I couldn't wait any longer to share with you lovely Wineaux my adventure in the land of the world-renowned dessert wine, port.

I didn't have enough time to go to the Douro Valley, where the grapes for port are grown and vinified (for that matter, I didn't have enough time to visit most of the other fine winegrowing regions in the country,) but I squeezed in a day trip up to Porto and Villa Nova di Gaia where the port lodges are located. (Gaia is actually a separate town across the river from Porto where the lodges are, however most people simply use "Porto" to describe the area of both towns.)

In keeping with my historical adventures while traveling solo, I boarded a train before dawn in Lisbon, and a few hours later, disembarked where I thought I'd have a five-minute walk to my first stop, Taylor's. Nope! Luckily my facility with languages gave me enough rudimentary Portuguese to sort out that I'd have to take a different tram two stops and walk a somewhat bizarre route from there. Eventually I found the place, and while I thought I was very late for my ten am appointment, I discovered I was actually early for my eleven am appointment! Time to celebrate with a glass of port.

I met with Robert Bower, who gave me a tour of what is the area's oldest port lodge (Taylor's moved to that facility in 1692, so yeah, I guess that's kind of old...) and he mentioned that their location on top of the hill was prime as to avoid flooding, although back in the day it was treacherous to bring barrels of port all the way down the steep incline to the river for transportation. As I had already teetered down some angled cobblestones to get there, I had to imagine so. 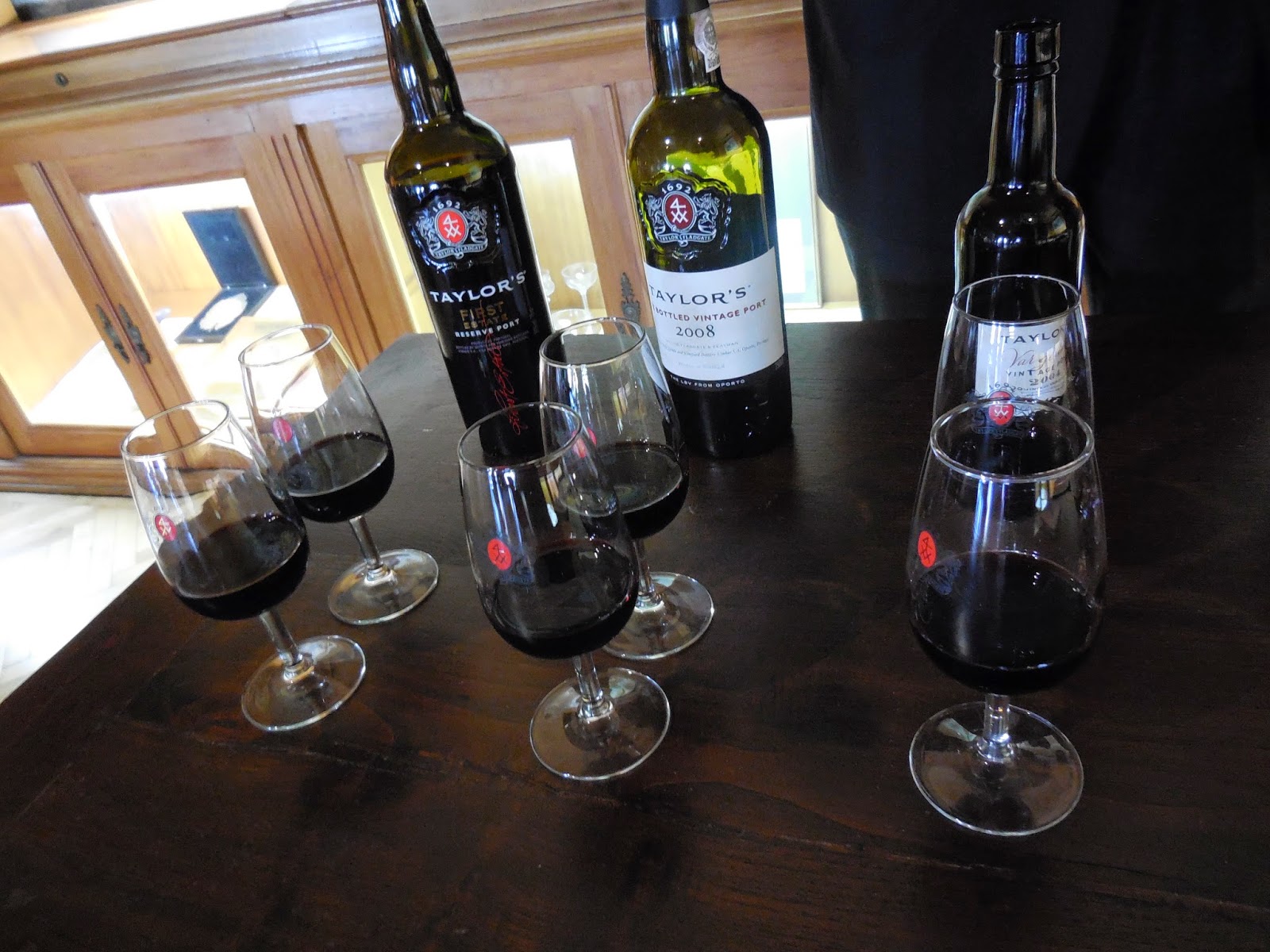 Robert is a member of the 8th generation of his family to be involved in the port industry. Although born in Porto, he was mostly raised and educated in England, and joined Taylor's in 2011. Taylor's is one of the last two British-run port houses (Symington is the other,) and yet they look to modern techniques and sustainability even as they embrace tradition.

We began our tasting with the rubies (ruby port is a younger, fresher style, as opposed to tawny port, which shows evidence of aging and oxidation.)

The NV Taylor's First Estate Reserve is the youngest and most approachable. It showed intense fresh fruit and was luscious and most "wine-like," as the higher alcohol was tempered by the brightness of the fruit. Notes say, "wow." ~$17

The 2008 Taylor's LBV (Late Bottled Vintage) was a style that actually evolved from restaurant demand; people wanted the flavors and personality of a vintage port, but didn't want to pay high prices and have to deal with decanting, etc. This was complex, with great fruit in the mouth, bright acidity, and a lovely note of cocoa powder.  ~$20

The quality of the spirit used in the fortification process is much higher for the 2004 Taylor's vintage port, so the marriage of wine and spirit happens quickly and without a "dumb" period in the bottle. This could now age 120-140 years. It was complex and elegant, with a lovely nose of pine, and eucalyptus on the palate. Notes say, "really fantastic!" ~$30 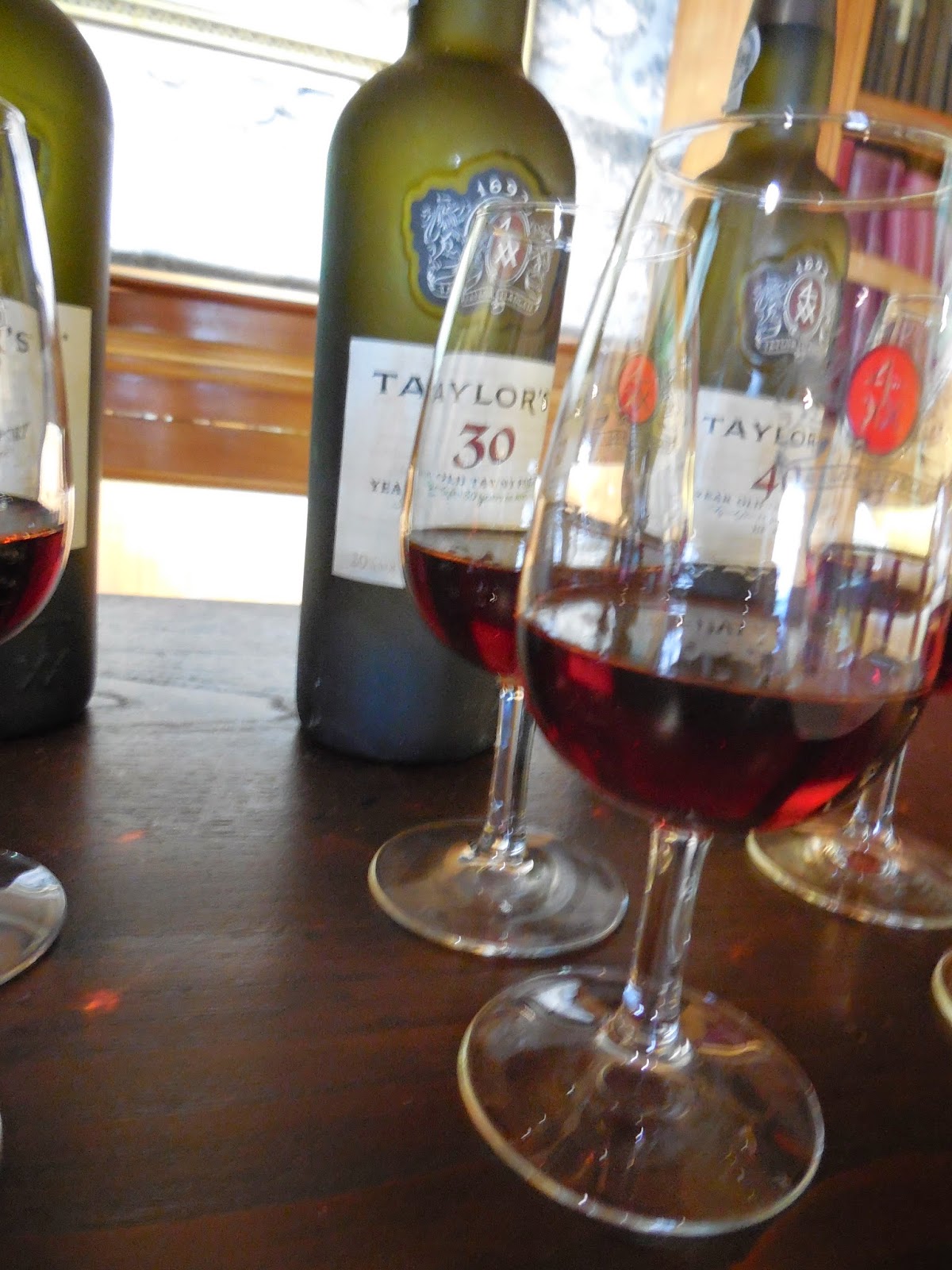 I absolutely loved the Taylor's 20 Year, which had a sherry/madeira feel, with forward, bright acid, and notes of toffee and gingerbread. It was incredibly smooth; notes say, "goes down easy! V. v. nice." ~$40

The Taylor's 30 Year exhibited its age visually, with a darker hue, and on the nose, with a nuttiness coming in. This was subtle, with floral notes and candied orange peel, and a still-bright acidity. ~$90

Finally, the Taylor's 40 Year was a very dark brown, with heady aromatics. It showed toffee, rose petals, and lemon peel, and was richer in the mouth (longer time in barrel = more evaporation = concentrated flavors in remaining port) with an incredible complexity and still "awesomely bright" acidity. ~$175

The whole experience at Taylor's was magnificent, except for one thing: I had hoped to sample a bit of the 2011 Vintage port, as the wine world is going berserk over the 2011 vintage. Unfortunately for me, Robert informed me they are already out of stock of the 2011! Oh, well. 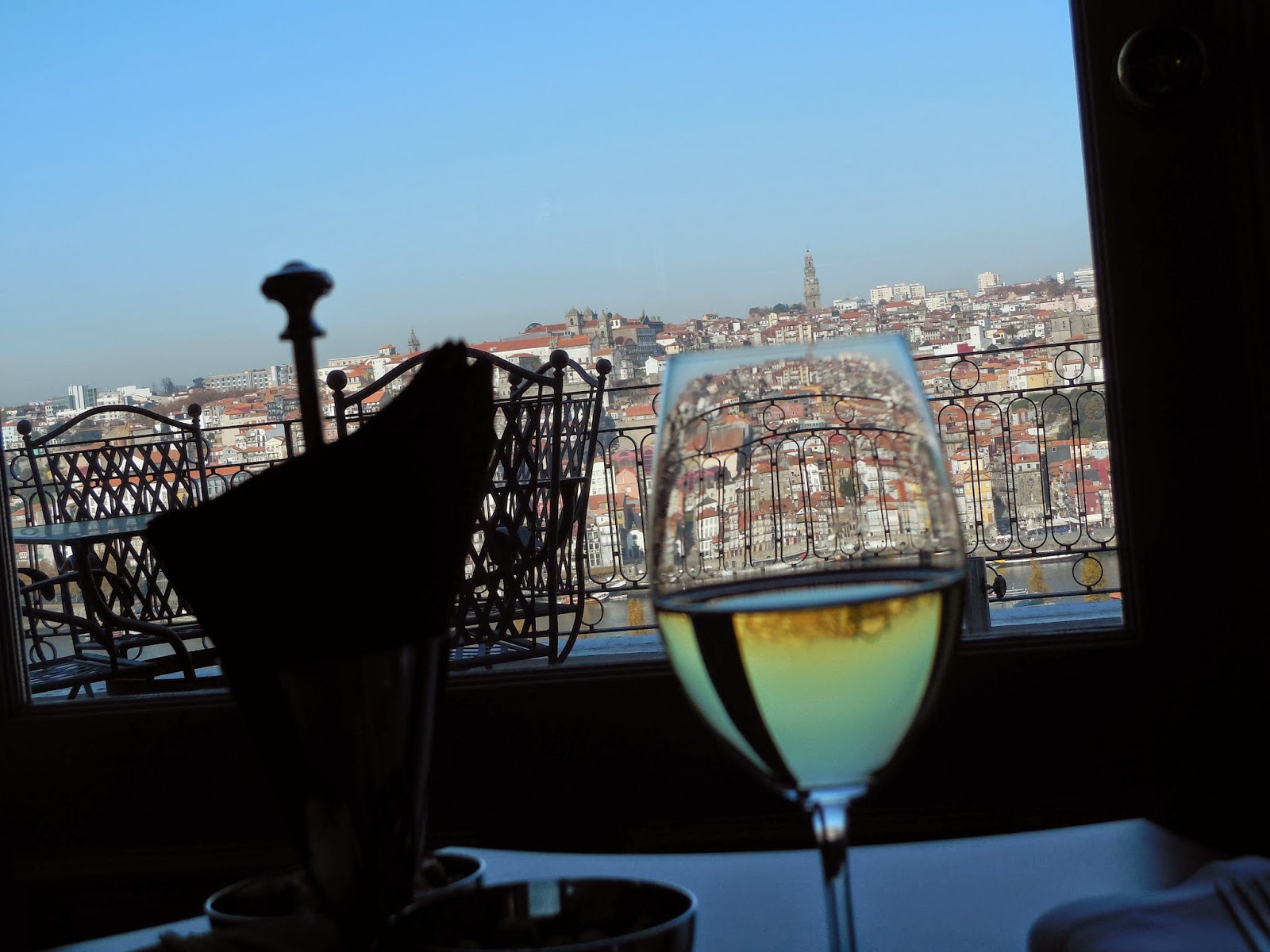 (Perhaps to make up for disappointing me, Robert suggested I stop by the Yeatman hotel next door for lunch, as it has an exceedingly well-cultivated wine list. It also is one of the most luxurious hotels I've ever been in, and I relished the comfort and view as I enjoyed my salad and the 2011 Soalheiro Reserva Alvarhino from the Minho region of Portugal. It was a vibrant medium gold, with a nose of mountain florals, ripe melon, peach, and apricot. In the mouth it showed green and herby notes, with overripe honeydew and tangerine. Not overly acidic, and very nice! [€46 bt/ €12 glass. ~$25]) 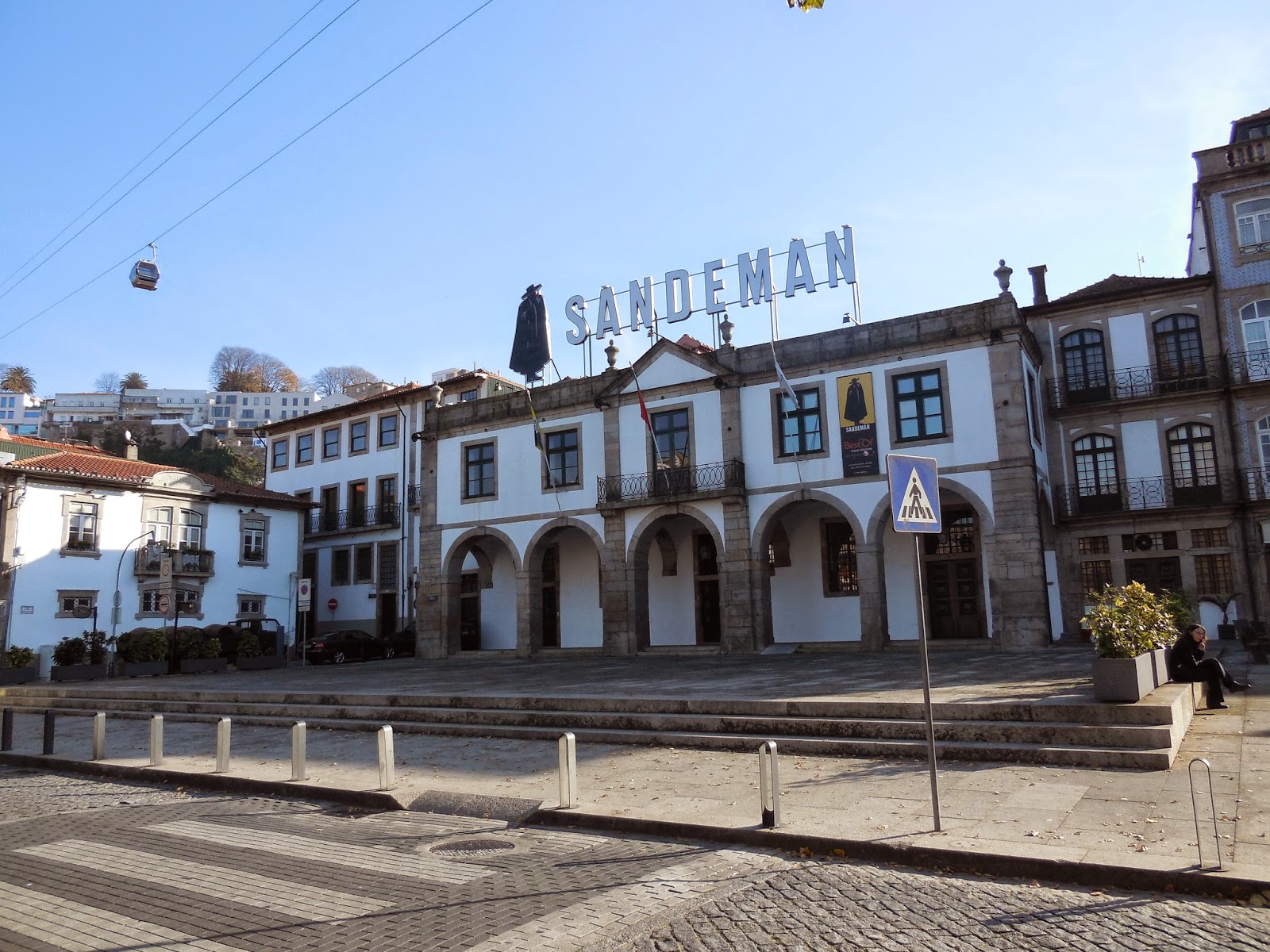 My next appointment was down the hill at Sandeman's. Unfortunately, my experience there wasn't quite as lovely as that at Taylor's—I discovered I was not on a private tour/tasting but rather shuttled into a public group. So I had to endure a litany of information I already knew about the history of port, its vinification, etc., along the guided tour. Our guide was actually very good, in spite of her being dressed in the cape and hat of the Sandeman "Don" figure. 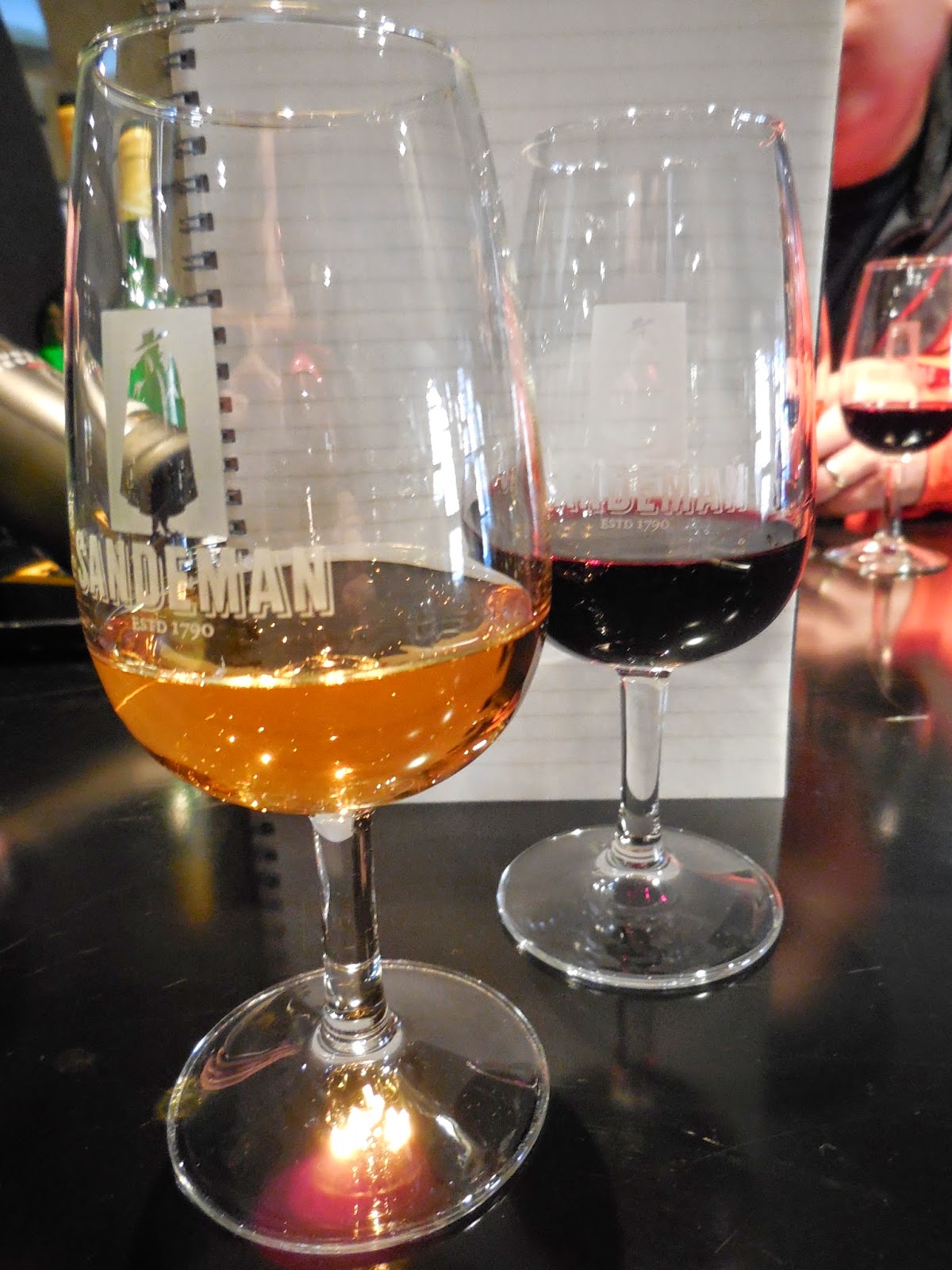 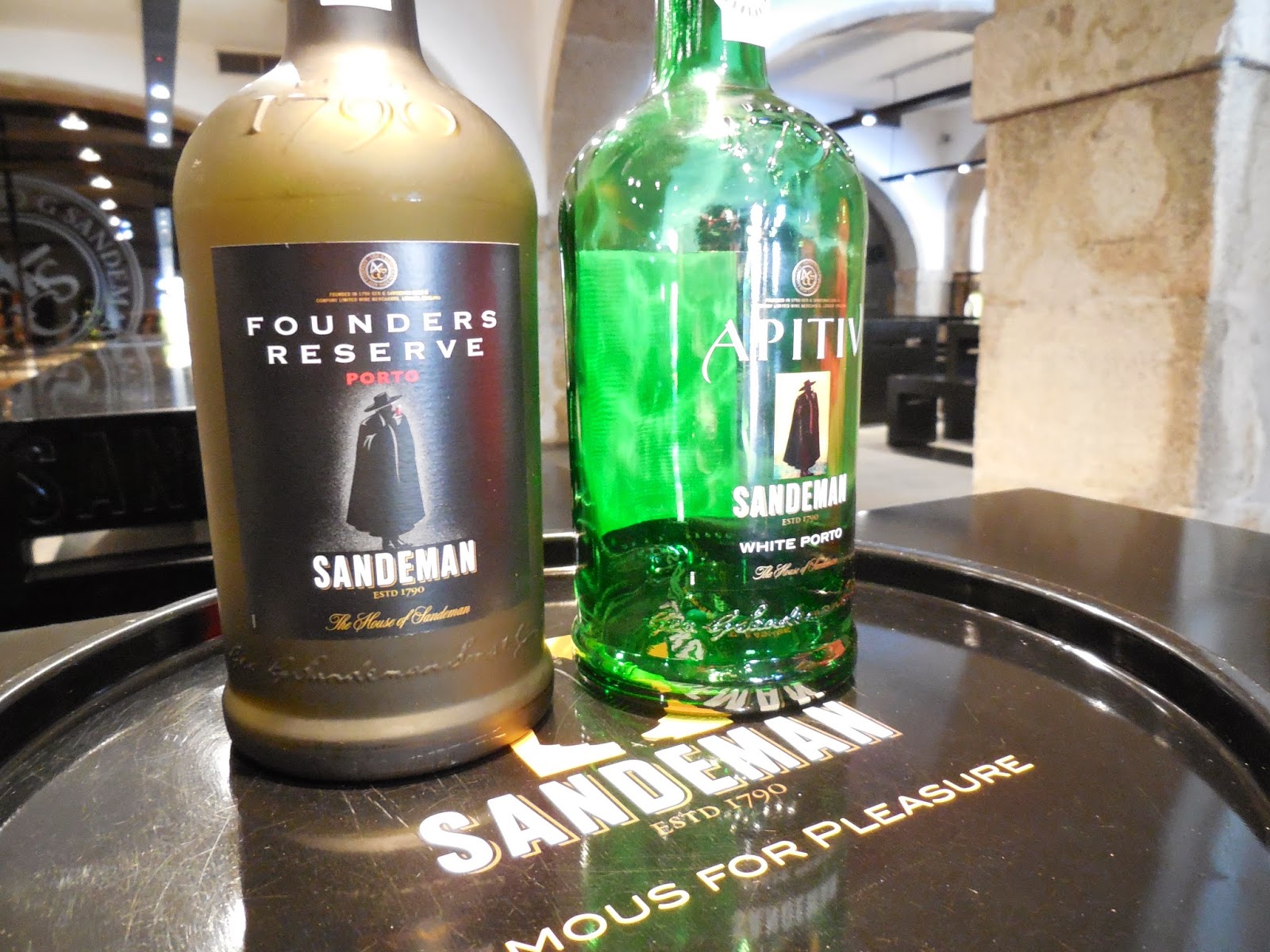 Her outfit was not my first clue that this company definitely knows how to market and brand. (Quite literally—apparently Sandeman himself invented the practice of branding wine barrels.) The little attached museum, all parts of the tour, and the tasting room were modernized and shiny. The whole experience felt very antiseptic and by rote to me, although I will say that the other people in my group were very pleased with the tour. At the end, we were poured two wines: the NV Sandeman's Apitiv (which is more of a sherry) had a medium copper-gold color, and a slightly astringent nose of mountain florals. It was slightly sweet yet steely and a bit salty. Pleasant, though not a ton of character. ~$16. And the NV Sandeman's Founder's Reserve Ruby, which had a nice expression on the nose and lots of acidity, but was generally forgettable. ~$18

I loved meandering the little streets of Gaia and wandering down to the river to look at the replicas of the barcos rabelos, the boats that transported wine from the Douro valley to the port houses. My plan was to cross the bridge to Porto, find the legendary Lello & Irmão bookstore, and have a glass of wine before catching my train back to Lisbon.

But I passed a little storefront outpost of Quinta do Noval so had to try a few more ports first! They had little sample bottles to purchase, so I started with the NV Quinta do Noval Fine White, a white port. It was a very viscous pale gold, and had a gorgeous floral aroma, with florals, melon rind, a pleasant soapiness, and light acidity. €2,50. Then I splurged on the Quinta do Noval 40-Year Tawny, which was a brownish bricky red with caramel, something a bit "horsey," a madeira feel, and nice acidity. €9,50 [US bottle ~$125]

I finally made it across the river and continued my hill-climbing, enjoying a beautiful afternoon in Porto. While my port-tasting experiences were mixed, it was a wonderful way to cap off an amazing week in Portugal!


Posted by Annie Edgerton at 3:38 PM No comments:

AN EMBARASSMENT OF (WINE) RICHES

Recently my wine-appraiser father, William H. Edgerton, and I were invited to a cocktail hour hosted by the Napa-based Benchmark Wine Group, an organization we occasionally work with which pairs up buyers and sellers of fine wines. It was an opportunity to meet some people face-to-face for the first time and to sample some outrageously wonderful wines. (I had not originally intended to write about this event, but after tasting a few of the bottles they had open at the bar, I couldn't help but grab my father's phone, snap some photos, and make some mental notes!)

I started with a white Burgundy, the 2006 Bouchard Meursault Perrieres, which had a lovely viscosity and complexity with heady, intoxicating aromatics, and a long finish. (~$100) Right up my alley! I could have indulged in a second pour, but there were many other bottles calling my name. 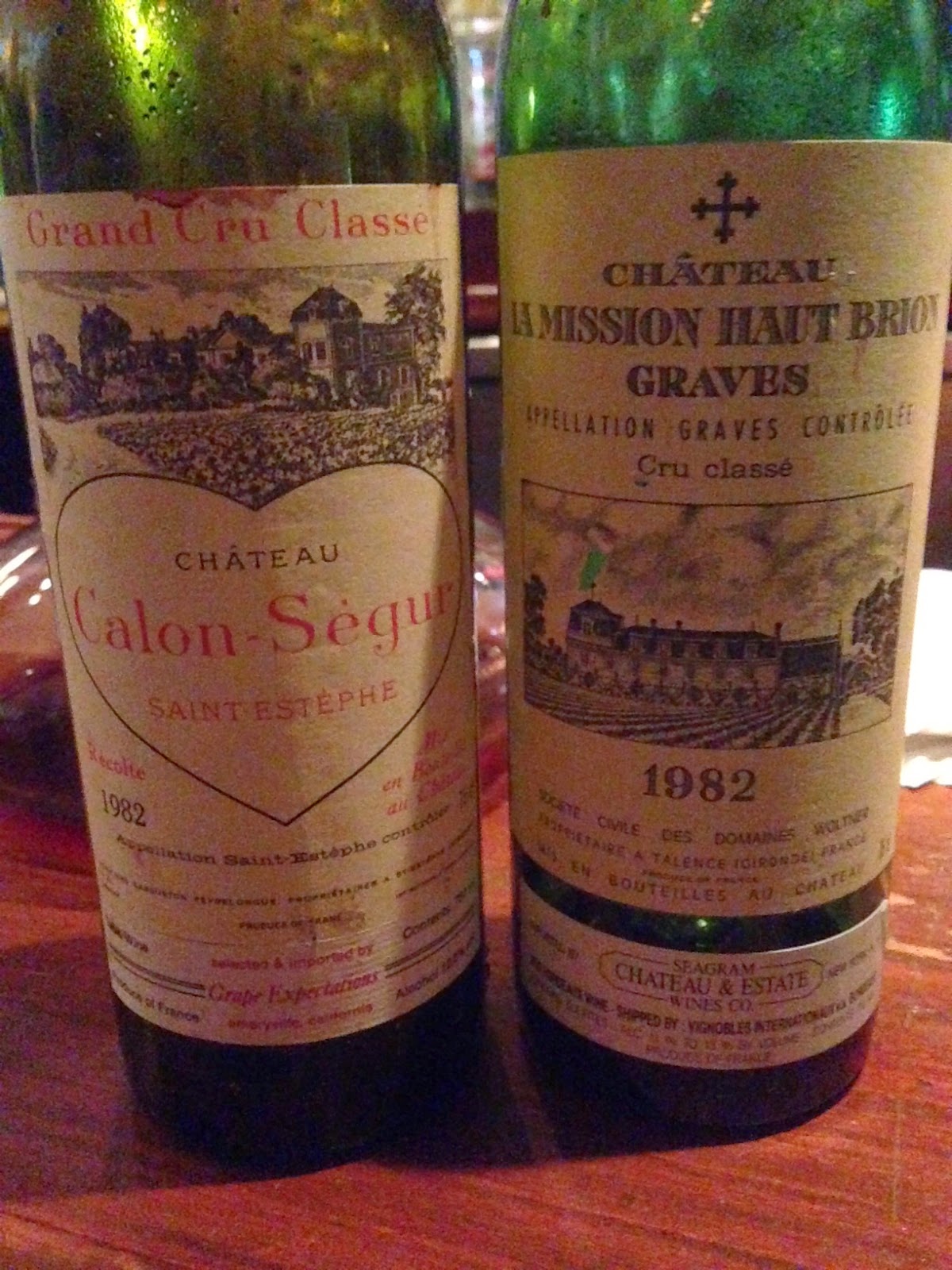 So I hopped over to Bordeaux for some classic wines from a classic vintage: the 1982 Château Calon-Segur from St. Estèphe showed abundant earthy notes, yet was very elegant and charming. (~$220) The 1982 Château Leoville Barton was aging well, with pleasant floral and mineral notes. (~$175) And the 1982 Château La Mission Haut Brion from the Pessac-Léognan region had nice tertiary aromatics, and yet the fruit was still supple and bright. (~$850) 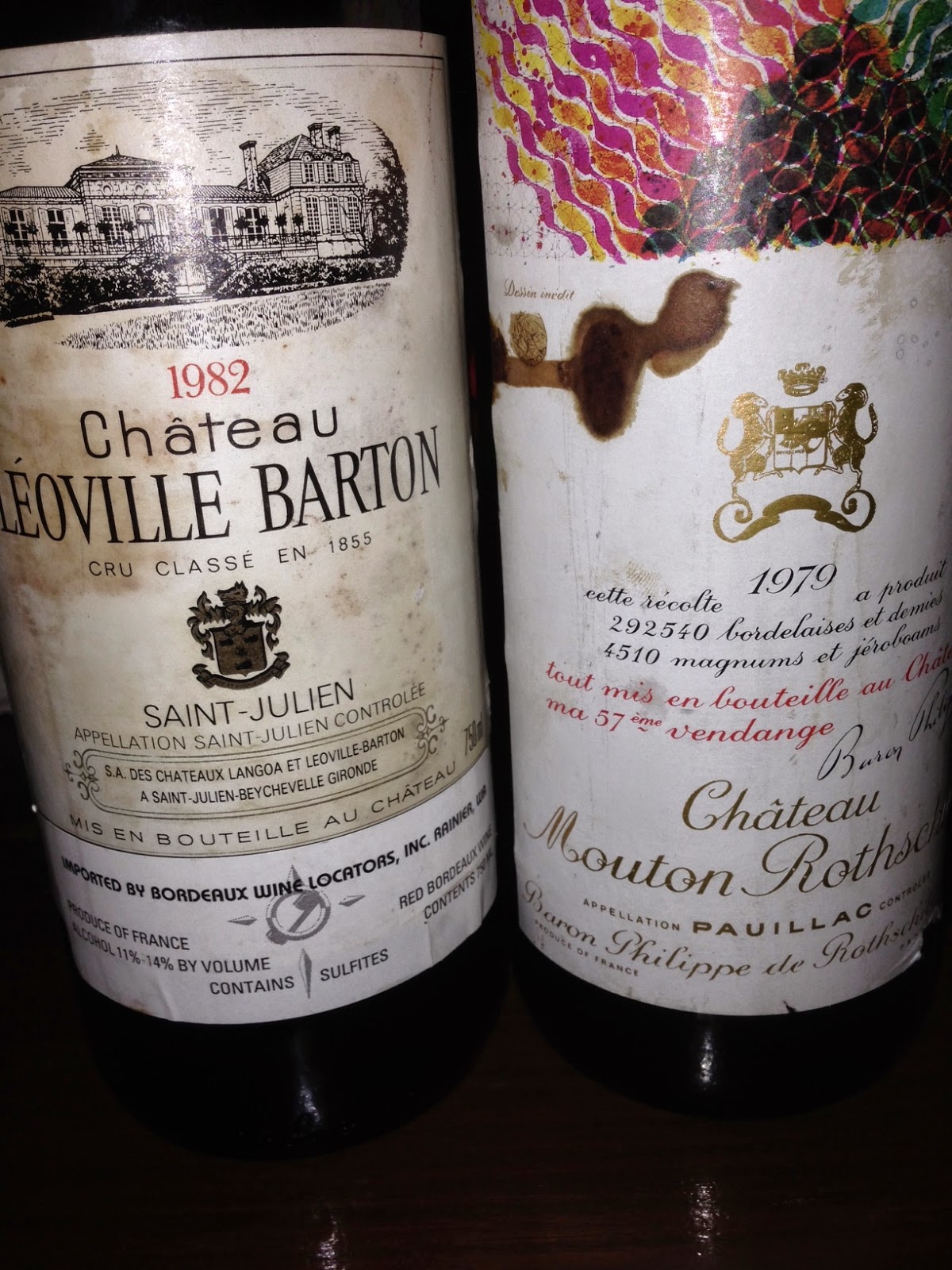 The only First Growth at the tasting was the 1979 Château Mouton Rothschild. 1979 was not a particularly good vintage, and I had never yet seen a bottle of this wine. The label was beautiful; Mouton has long commissioned label artwork for each vintage, and this was the first label ever commissioned by a Japanese artist, Hisao Domoto. However, the aging of this vintage, even from a top producer, resulted in a wine with an overly meaty nose and a complete lack of fruit in the mouth. My father agreed, saying, "It unfortunately doesn't have the character or pedigree of a First Growth wine." (~$300) 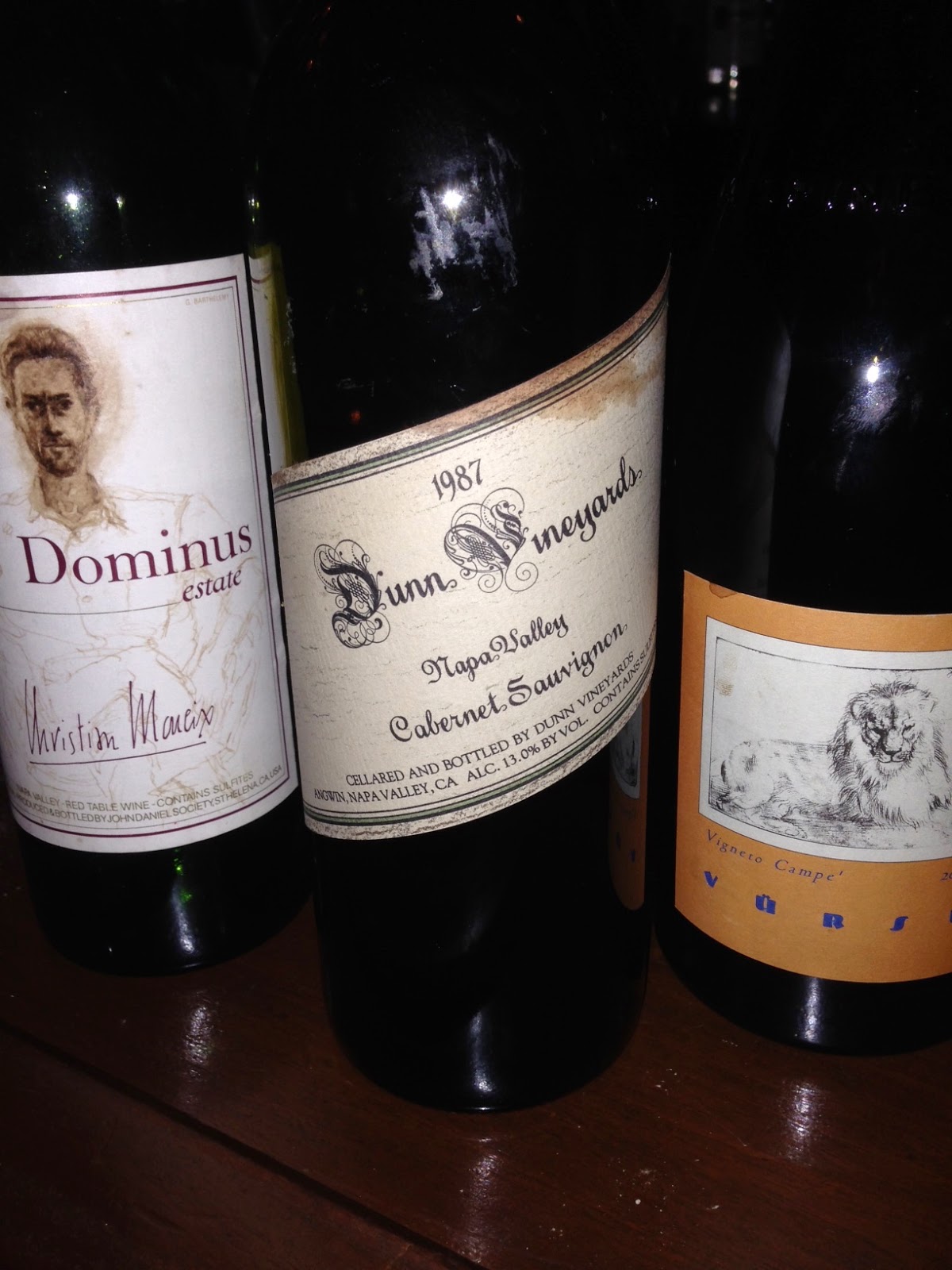 There were some offerings from California as well—a 1987 Dunn Vineyards Napa Cabernet Sauvignon, which had a great deal of personality and still felt quite youthful. (~$70) This was not even the Howell Mountain-designated bottling, which is perhaps more highly esteemed and may be aging even better! I tugged at my father's sleeve to point out the 1986 Dominus Estate, of which we had a few bottles in our cellar. It had incredible aromatics of cedar—just a lovely nose—and there was eucalyptus and light fruit on the palate. We nodded to each other as if to say, "Let's hold on to this baby a bit longer."

There were more bottles clamoring for attention: an Opus One, a Château d'Yquem... but dad was ready to head home for dinner so we began saying our goodbyes. I had to grab one more taste, however, and was soooo glad I did. The 2000 La Spinetta Barolo Vigneto Campe Vürsù had robust red and black fruits with soft oak on the finish. It was a huge yet elegantly crafted wine, and was showing absolutely beautifully. When I jotted down notes on the car ride home, with the flavors still lingering on my palate, I wrote, "Wowee wow wow, I want more!!" (~$150) I don't think I've ever met a La Spinetta offering that didn't impress.

Frankly, it was a joy to taste all of these prestigious wines, as opportunities to do so are few and far-between. Thank you to the folks at Benchmark for trotting out so many exceptional bottles for us to sample! Not only do I look forward to further collaboration, but I hope they may come back to the East Coast again soon... hopefully with some more treasures in hand.

Cheers!
Posted by Annie Edgerton at 12:13 PM No comments:

Labels: #wine, Barolo, Bordeaux, collectible, Napa, wine
Newer Posts Older Posts Home
Subscribe to: Posts (Atom)
ANNIE EDGERTON holds the WSET Diploma in Wine & Spirits, is a Certified Sommelier, and a Certified Specialist of Wine. She is a Wine Appraiser, Consultant, Writer, Educator, and TV host. You can find her sabering open Champagne on any given day.
"Helping people love wine, one sip at a time!"