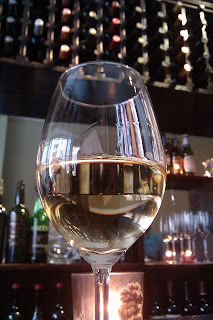 I never really understood the appeal of a “pub crawl;” I figured it was simply an exercise in deliberately getting drunk interspersed with a few minutes of low-impact workout as one went from bar to bar. But the other night I engaged in what could be called a “wine bar crawl” with mostly wonderful results.

Joined by my friend and fellow wineaux Carol, we started out at TURKS AND FROGS (323 West 11th St., 212/691-8875) It doesn’t take a great deal of sleuthing to figure out the emphasis is on things Turkish and French, so I began with a glass of 2008 Auguste Bonhomme Sancerre “La Forcine.” Pale yellow in color, it had an engaging nose of wet stone and straw with a little Sancerre-styled ‘dirty sock’ note. On the palate, there was pineapple, quince, a hint of lilac, and good lemon/lime acidity with a solid finish. [87]

Carol, forgoing France and Turkey altogether, first tried the 2009 Di Giovanna Viognier (Sicily), which was crisp and clean with melon and tropical fruits, exhibiting quite like a tart, refreshing New Zealand Sauvignon Blanc. [85] Missing the typical florals and viscosity expected from a viognier, she turned to the 2008 Robert Oatley Chardonnay from Australia (um, Carol – Turks and Frogs, not Italians and Oz – but whatever,) which had a light nose of lemon and was soft and fresh with a little butter and grass. [84]

Turks and Frogs bills itself as possibly New York’s first wine bar. It is tucked away on a quiet block of West 11th Street, and its tiny space is decorated with little charming antique-y elements. There is a small bar up front (where we sat, the better to interact with our knowledgeable bartender,) a few tables farther in, and a darkly romantic room at the back. The menu had a nice array of mostly Mediterranean-influenced items, and if you go for dessert, there is a – wait for it – chocolate tasting plate, which sounds delectable.

Occasionally, Turks and Frogs will offer special tasting flights, and they are considering a white/rosé flight for summer. I encourage that opportunity, as I found it is truly worth taking a gamble on some of the Turkish wines they do offer by the glass, even though the region or grape varieties may be unfamiliar to you. 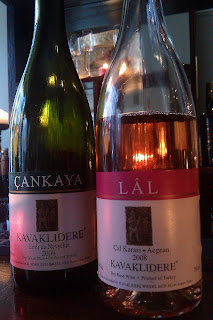 For example, the 2009 Kavalklidere Emir de Neusehir Çankaya had a nose of melon and a little barnyard-y terroir, and was pleasant and light with interesting florals and well-balanced crisp acidity. [85] I also really enjoyed the rosé 2008 Kavalklidere Lâl Kevasi Aegean, which had a light peach color, a bright nose of Bing cherry, rose petals, and something almost like marzipan. It was very dry with a perfumey palate of minerals, roses, and a bit of brick dust. [88]

With an early-evening Spring breeze floating through the open door, the attentive, friendly and knowledgeable staff, and many more intriguing options on the menu (wine and food,) it was hard to leave. But it was time to “crawl” to our next stop, which was helpfully just around the corner.

For more information on TURKS AND FROGS, visit www.turksandfrogs.com.

Up next: Austrian influence at THE UPHOLSTERY STORE.

Posted by Annie Edgerton at 12:28 PM No comments: