CLEVER IDEA, BUT DOES IT WORK?

Dave Phinney, the creative mastermind behind Orin Swift (The Prisoner and others,) has embarked on another cheeky scheme; make a wine that in one fell swoop defines an entire country's terroir. 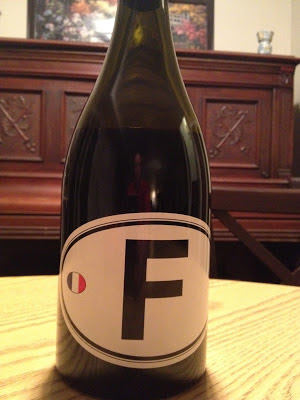 I am on the fence about this concept, Wineaux.  On one hand, it is an interesting gamble to see if blending a number of a particular country's signature grapes somehow distills the entire character of a huge area into one wine.  On the other hand, I think it is an absolutely ridiculous idea.

Take France for example (as I am currently sampling "F1" - for France) in Phinney's new Locations series.  This wine is a blend of Grenache from the Roussillon, Syrah from the Rhône and "assorted Bordeaux varietals".  It does not seem to be vintage designated, although 2011 was their first vintage so I imagine that's what I'm drinking.  (The label is like those stickers Europeans put on their cars to say what country they're from... cute.  But there's no vintage to be found, and relatively little other information, for that matter.)

So, the thing is, of course France is a huge and significant winemaking country with a storied history.  Grapes that grow in the northern areas are not typically blended with grapes that grow in the southern areas, with good reason.  They are signatures even of their sub-regions.  Northern Rhône - Syrah is king.  Grenache is very successful in the South of France.  Bordeaux varieties - well, Cabernet Sauvignon reigns on the Left bank and Merlot on the Right, but I imagine this could include Petit Verdot, Cabernet Franc and even Malbec.  Someone deciding to smush these all together is plain CUH-RAZY.

Well, you know what they say about genius and crazy... they kind of go hand in hand.
So the real question is: does it work?

Wineaux, I'm not going to say that this is the best wine I've ever had in my entire life, but I will grant you this: yes, it's pretty tasty.

I am getting the spice from the Syrah, the black fruit from the Grenache, and the Cabernet Sauvignon's structure for sure.  The wine is dense and complex, if a little fumble-y in the mouth.  I love the violet and lavender florals but they kind of butt heads against the ripe strawberry jam and meaty notes.   This wine makes me wonder how the whole process went down - my wine-nerdiness wants to know about harvesting and vinification - but the result is a pretty big, relatively interesting French red for around $16, so who can complain about that?

Ultimately, I would recommend this wine, especially for its value, but I remain wary of the gimmick.  It remains a clever idea, but the jury is still out if this experiment truly works.

FYI - Phinney also makes a Spanish offering - "E 1" - that I will attempt to seek out, and is at work on an Italian example.  (THAT one I'm very curious to try!  Let's blend Nebbiolo and Sangiovese and Aglianico and Nero d'Avola and and and?!?! Hm...)

I remain on the fence - I love the gall in attempting this, but wonder if Phinney should have put down the proverbial Oenophile Crack Pipe before embarking on this odd odyssey.  It's at least worth a try, so seek it out and let me know what you think!  I'd love to hear what your experiences are.

Posted by Annie Edgerton at 12:25 AM No comments: