THE NEW CORNERSTONES OF NAPA, DAY ONE: 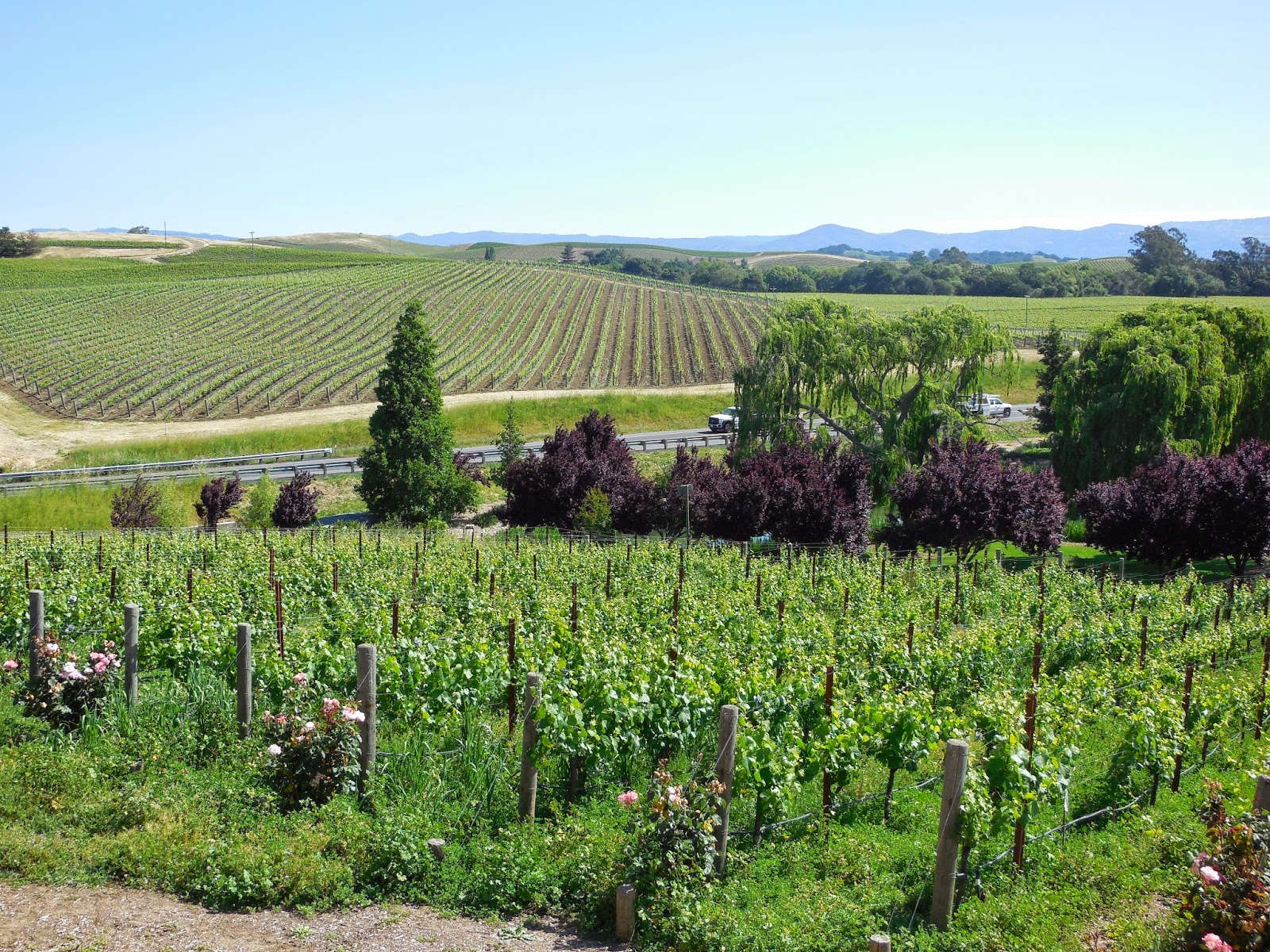 When I found out the Oakland As baseball team had invited me out to sing the National Anthem recently, my first thought was "Yippee, I booked team #19 on my Quest!" (Click the link for info on that particular pursuit of mine.) My second thought was, "Yippee, an excuse for a trip to NAPA!"

On prior visits to Napa Valley, I had a group of burgeoning oenophiles to shepherd around, so we had to make the usual stops at Robert Mondavi (perhaps the "Disneyland" of Napa, but a great visit,) and other high-profile wineries that catered to groups like ours. This time I was on my own—a Wine Minx on a mission. I had two days; who knew what I could find?

I sought out places that were more "insider"—wineries the sommeliers loved, or that other small winemakers recommended—to learn more about what was going on beyond the large conglomerates and operations that have somewhat taken over Napa's identity. 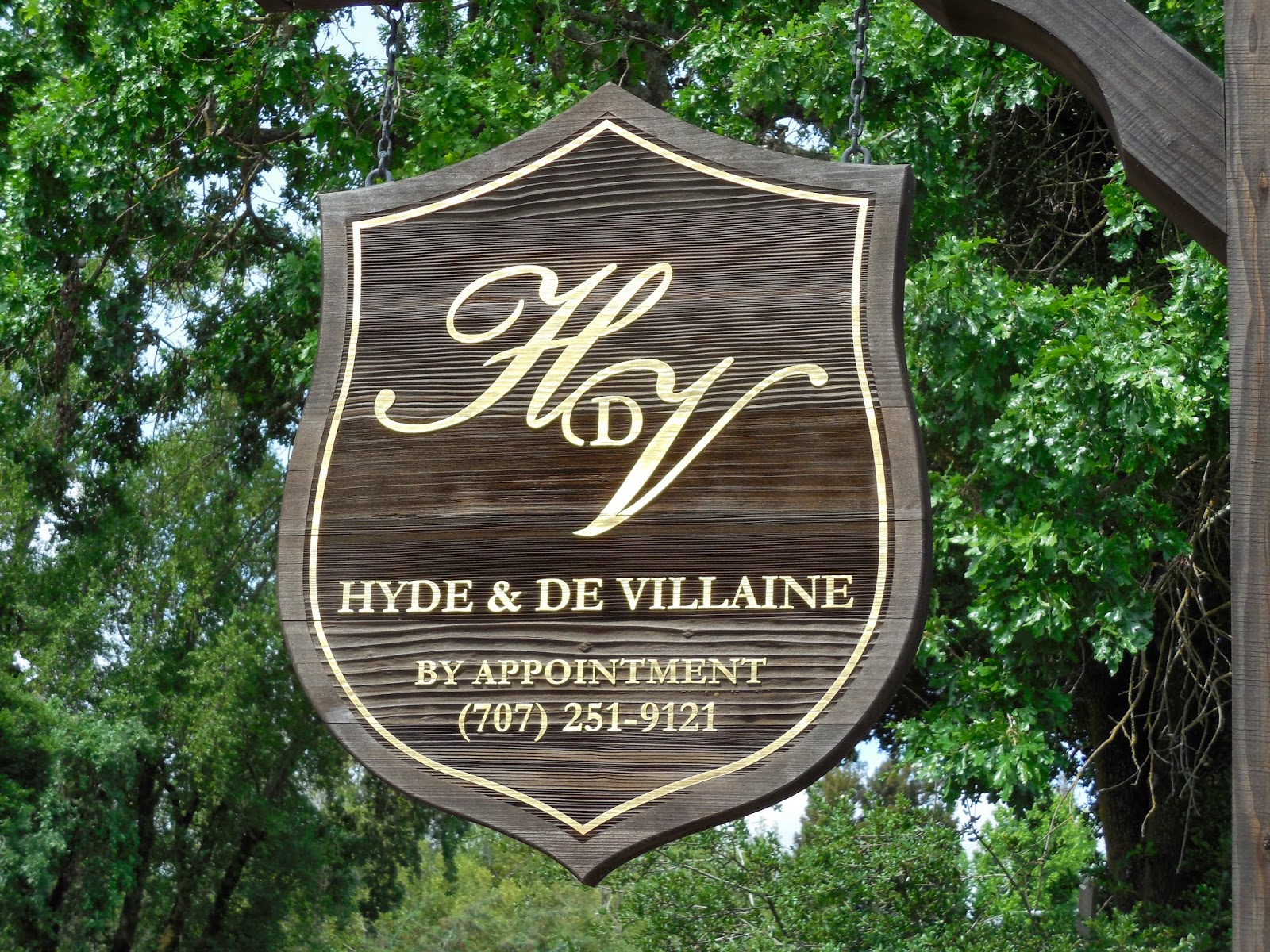 On a sparkling Sunday morning, my first stop was Hyde de Villaine, a joint venture of Napa's Larry Hyde and Aubert de Villaine of the storied Domaine de la Romanée-Conti in Burgundy. The two families, related by marriage, developed the idea to collaborate "over the dinner table," said Lawrence "Eddie" Townsend, the HdV sommelier. In an unassuming building on the outskirts of downtown Napa, Eddie and I sat down to taste through four of HdV's current offerings. (HdV offers two options for tasting, the "HdV Flight" of the following four wines' current releases at $45pp, and the "Comandante Flight" which adds two premier wines for $75pp, with fees waved with certain wine purchases. Appointment requests can be made via the above website.) 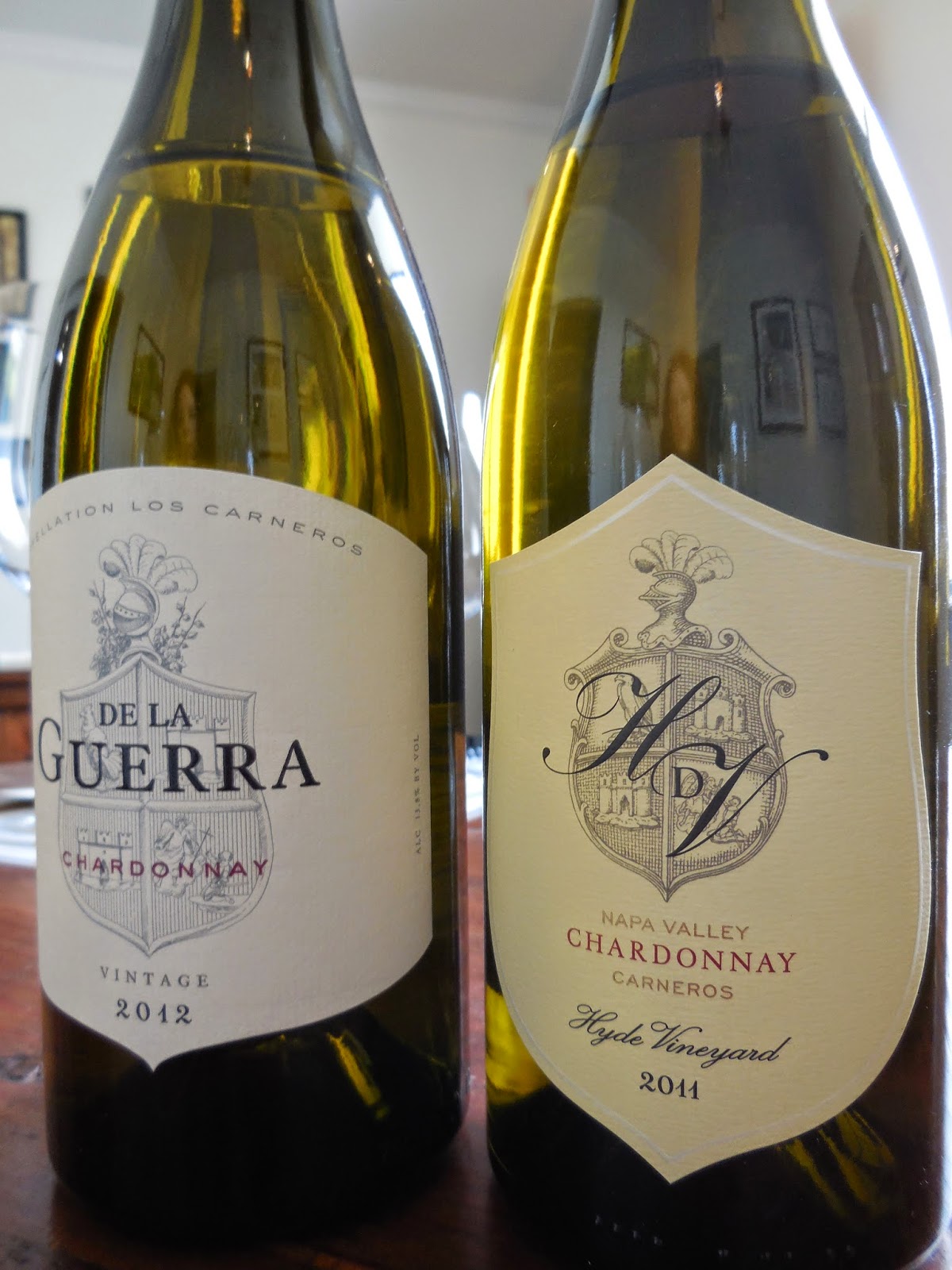 We began with the 2012 De La Guerra Chardonnay, which had a nose of lemon verbena. On the palate were notes of grass, lemon curd, a whiff of smoke, herbs and a pleasant note of—forgive me, but I really got this—mortadella(!), balanced by a very bright and refreshing acidity. Aged partially in a "concrete egg," there was some resulting autolytic character, which added a bit of weight (and maybe contributed to that mortadella.) $45 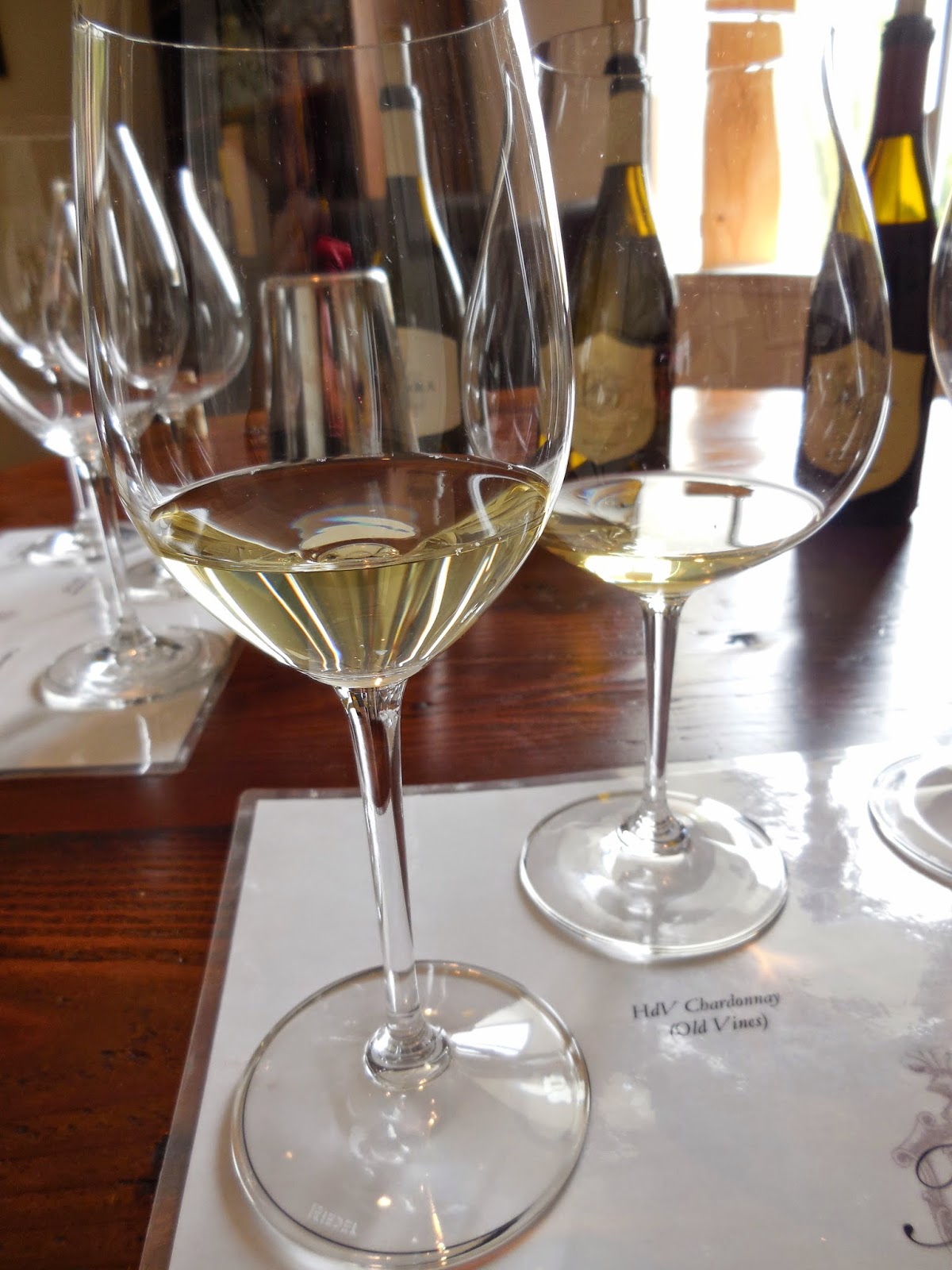 Next up, the 2011 HdV Chardonnay, with an incredibly complex nose of aromatic yellow and white flowers, yellow apple, and fresh-cut grass. It was rich but not heavy-handed, with a sublime balanced acidity and a very long finish. Aged 12 months in oak (20% new.) $60 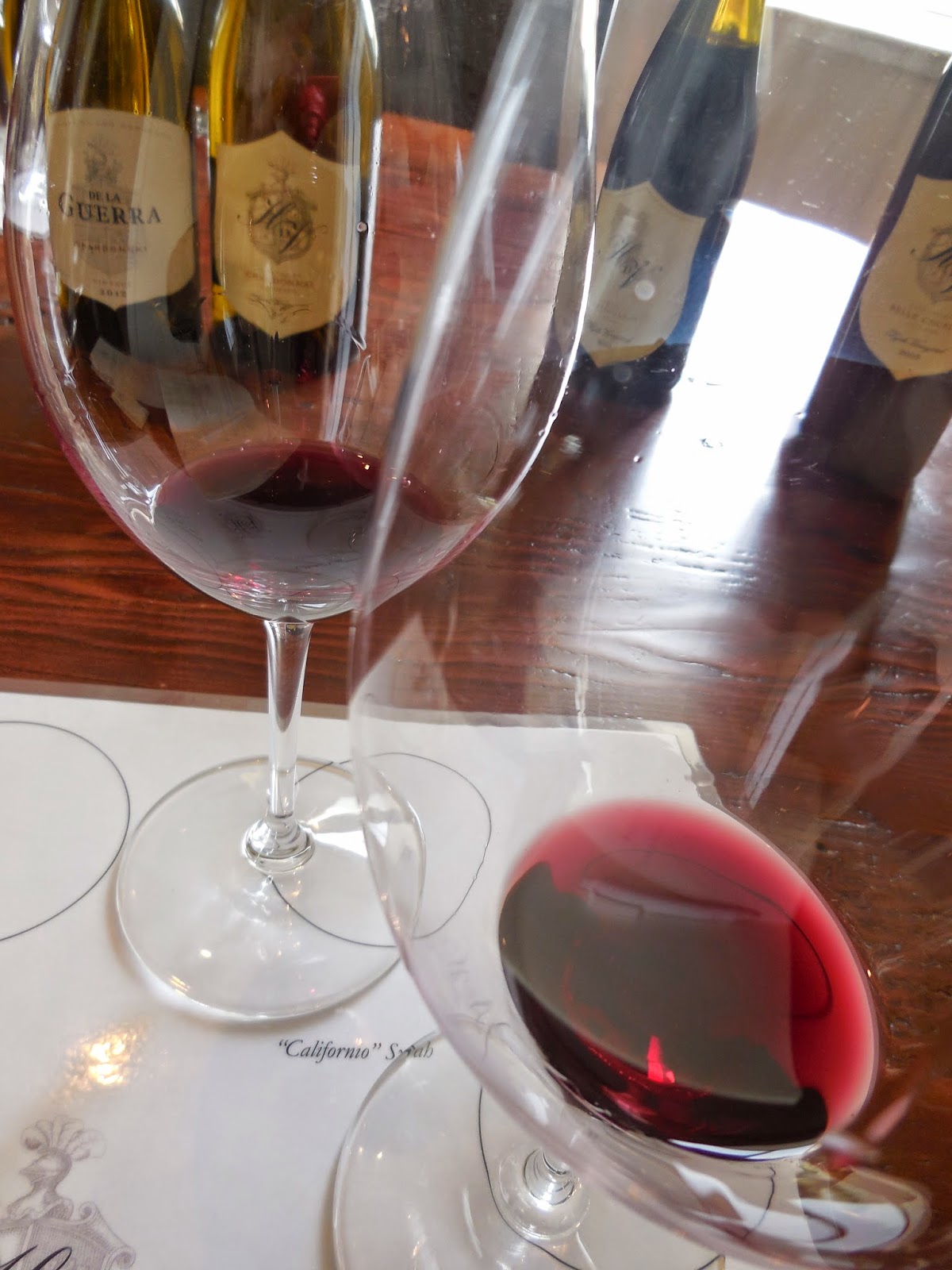 On to the reds! The 2010 HdV Californio Syrah, Hyde Vineyard had a bright, outrageous nose of red fruit, lush herbs, blackberry syrup and was a bit smoky. Its light acidity and integrated but grippy tannins balanced the dark fruit and smoked meat notes on the palate. Long finish. "This is the wine that brought me here," said Eddie, swirling his glass in appreciation. $60 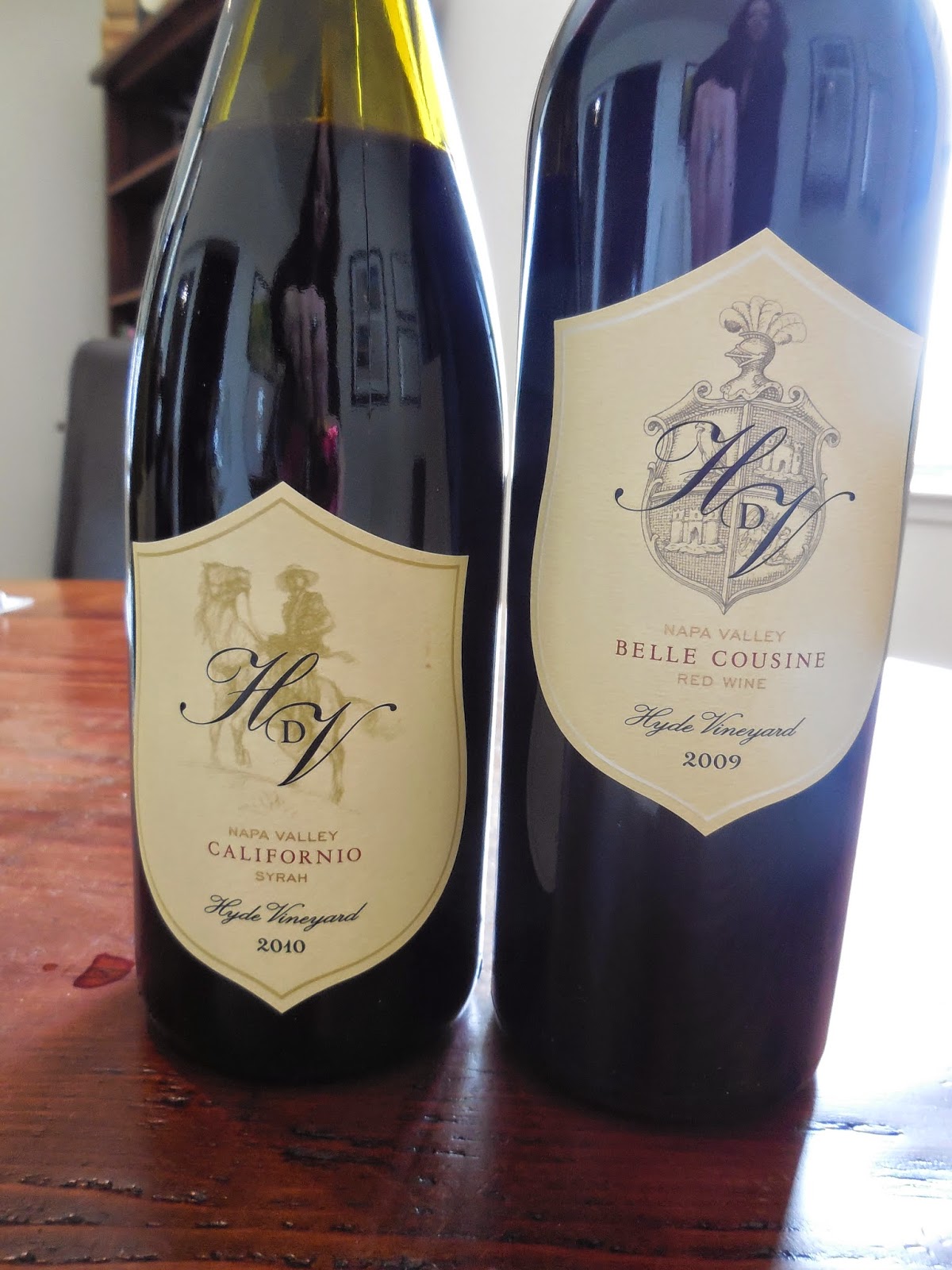 Finally, the 2009 HdV Belle Cousine: a blend of 52% Merlot and 48% Cabernet Sauvignon. Eddie mentioned that most years there was much less CS in the blend, and when I asked why this vintage was different, he told me that the blend is a group decision—Stéphane Vivier, the winemaker, puts together four different combinations, the six members of the team sit down together and taste them blind, and the group's favorite gets bottled. (Which I thought was very cool.) This had a nose of rosemary, a lot of graphite, pepper, herbs, and some green elements. It was fairly dry and earthy, with integrated tannins, licorice, red cherry, a little cranberry zing, red cassis, and some rose potpourri. $60

HdV also offers a handful of library selections (these wines from older vintages,) and some large-format bottlings, but the wines I tasted are basically the heart of HdV. It is a small operation (as I discovered when I called to make my appointment and Stéphane Vivier himself answered the phone.) But it is an elegant one, and committed to making quality wines, blending the ideology of New World fruit with Old World winemaking. When asked about expansion or notoriety, Eddie said that HdV "probably won't be a rock star," but it didn't seem as if anyone there cared a whit about rock star status; they just cared about making excellent wine. 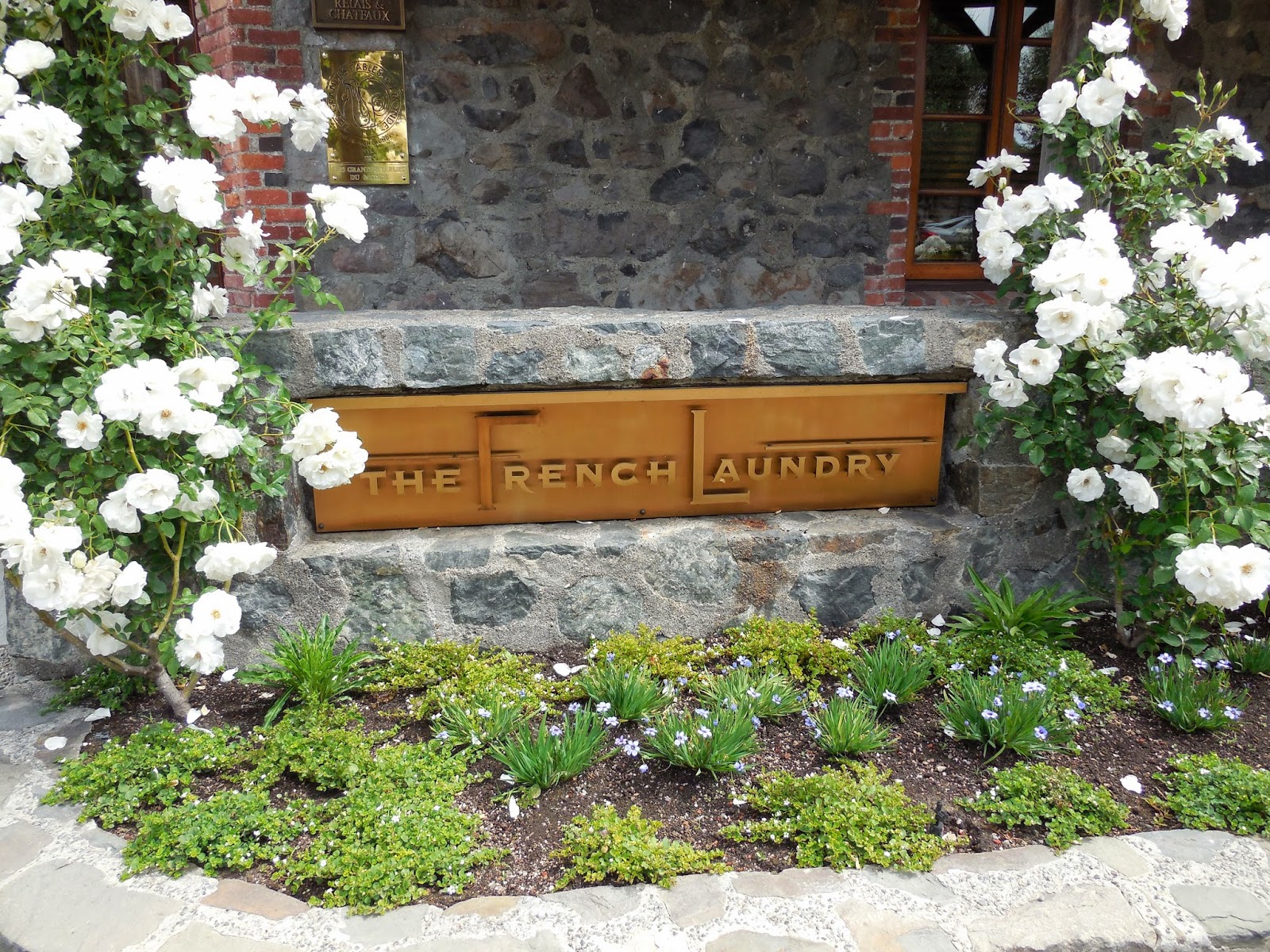 Very pleased by my first small winery visit, I hopped in my car and tootled up Highway 29 to Yountville for lunch at the French Laundry. If you know about "Laundry" (as the locals call it,) you know that it was a meal of a lifetime, and if I was a food blogger, you'd hear ALL about it! (If you do want to peer over my shoulder at the experience, visit my Wine Minx facebook page and scroll down to May 4, when I posted pictures of much of the lovely food and wine I had there over a four-hour extravaganza.)

Completely sated and in a state of zen-like foodie bliss, I meandered down the street to Ma(i)sonry. Billed as a "winery collective," Ma(i)sonry offers tastings of wines from 23 vintner partners in a gorgeous locale where art is also displayed and sold. The website perhaps describes their mission best: "Pairing artisan wines with exquisite art and furnishings in a historic setting." I was joined by my friends Adam Hersly and Stacy Soberalski of Hersly Wines (more on them and their wines soon!)

We were greeted by our curator for the afternoon, Bex Bishop, a local winemaker who coincidentally I went to college with and had previously connected with via LinkedIn... this unexpected visit was our first actual meeting. (Alas, none of her wines were on the list for tasting, but you can learn more about BX of Napa < here.) I was suddenly feeling very "insider-y!"

We started with a shared flight of whites; first up, the 2012 Lail Blueprint Sauvignon Blanc. Tart nose of grapefruit, very "cheeky" in the mouth with SweeTarts candy and herbs on the long finish. Pleasant and complex, this really grew on me. $40

We also tried the 2011 Lail Georgia Sauvignon Blanc. With 20 months in new French oak, you definitely felt the oaky toastiness in this heavy-duty, big style white. Lemon-lime citrus on the finish balanced the coconut and grassy notes. Someone said, "Hawaiian Tropic," which was kind of true! $120

A few from the collective itself; the 2012 Ma(i)sonry Sans Chene Sauvignon Blanc Hudson had a brief oak aging, and showed more tropical fruits and grass on the nose. Very bright and zingy acid balanced super-ripe melon and a little gooseberry. $32. And the 2012 Ma(i)sonry Marsanne had a lemon/herby/grassy nose, and was very minerally with warm herbs on the finish. Interesting. $38 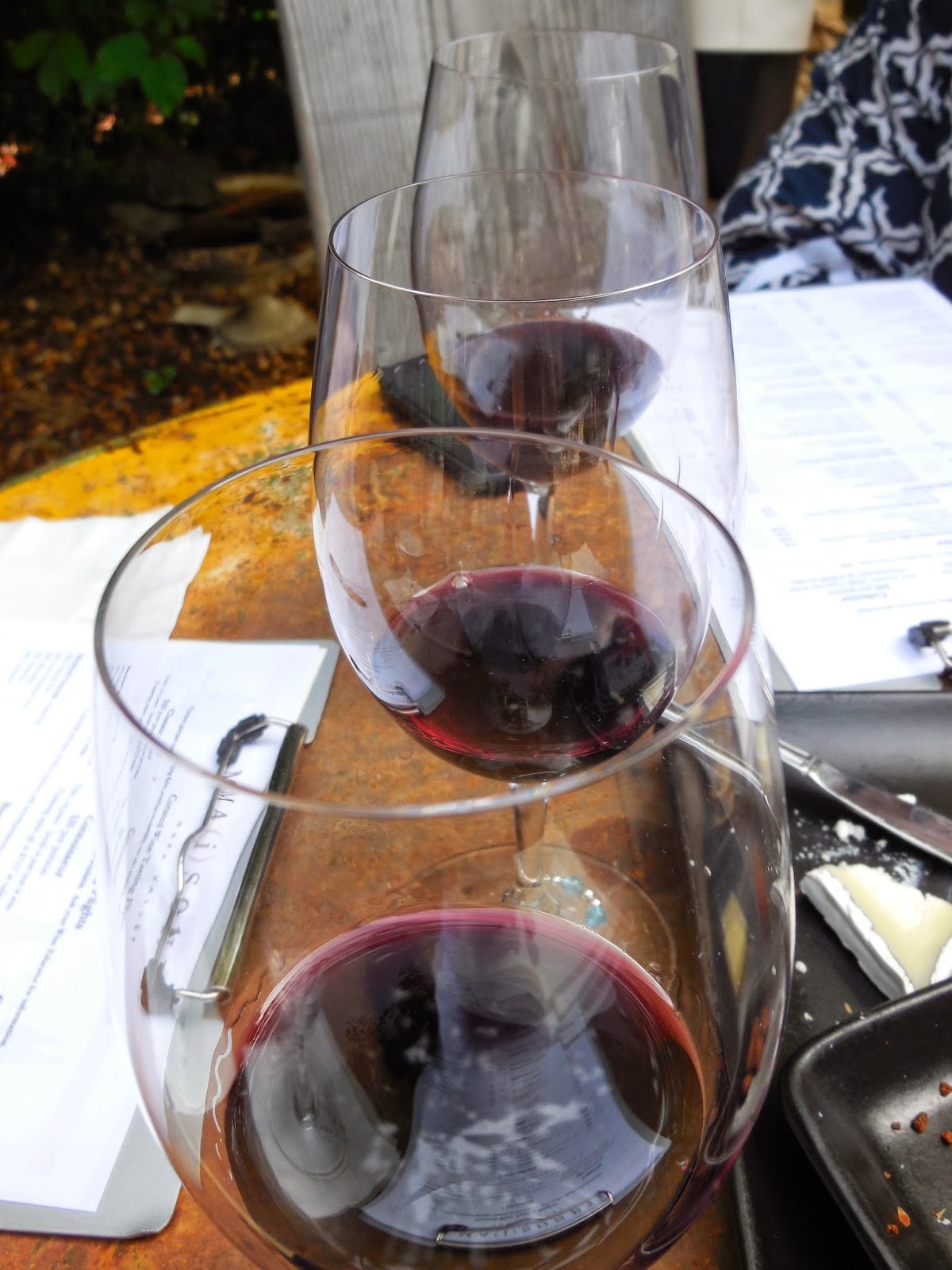 Next up: a pair of Pinots. The 2011 Pahlmeyer Pinot Noir, aged two-thirds in new French oak, was lovely. Very floral perfumey nose, tart and tangy fruit, purple flowers and rose petals with light red and black fruits. $75. And the 2009 Tuck Beckstoffer Eagle Vineyard Pinot Noir, aged 14 months in barrel and two years in bottle before release. This had a dark ruby color and a nose of really ripe red fruit. In the mouth, there was cherry jam, herbs, and a tart acidity that left this wine a bit disjointed in the mouth. At 14.9% alcohol, with this kind of character, the group felt this wine resembled a Syrah more than a classic Pinot. $85

On to the Cabs! I really liked the 2009 Casa Piena Estate Cabernet Sauvignon with its nose of cassis, berries, herbs, and flint. It was pretty high-octane, but bright notes of violets and lavender and a fresh acidity gave it lift. Super flirty. $150

The 2008 Pahlmeyer Proprietary Red is categorized as a "library" wine, as there is very little left in stock. A blend of 76% Cabernet Sauvignon, 8% Merlot, 6% Cabernet Franc, 3% Petit Verdot, and 1% Malbec, this was a lovely and complex wine, with notes of blackberry jam, green pepper, mocha, cinnamon, and bramble fruit with a relatively smooth finish. (No wonder there's not much left!) $125 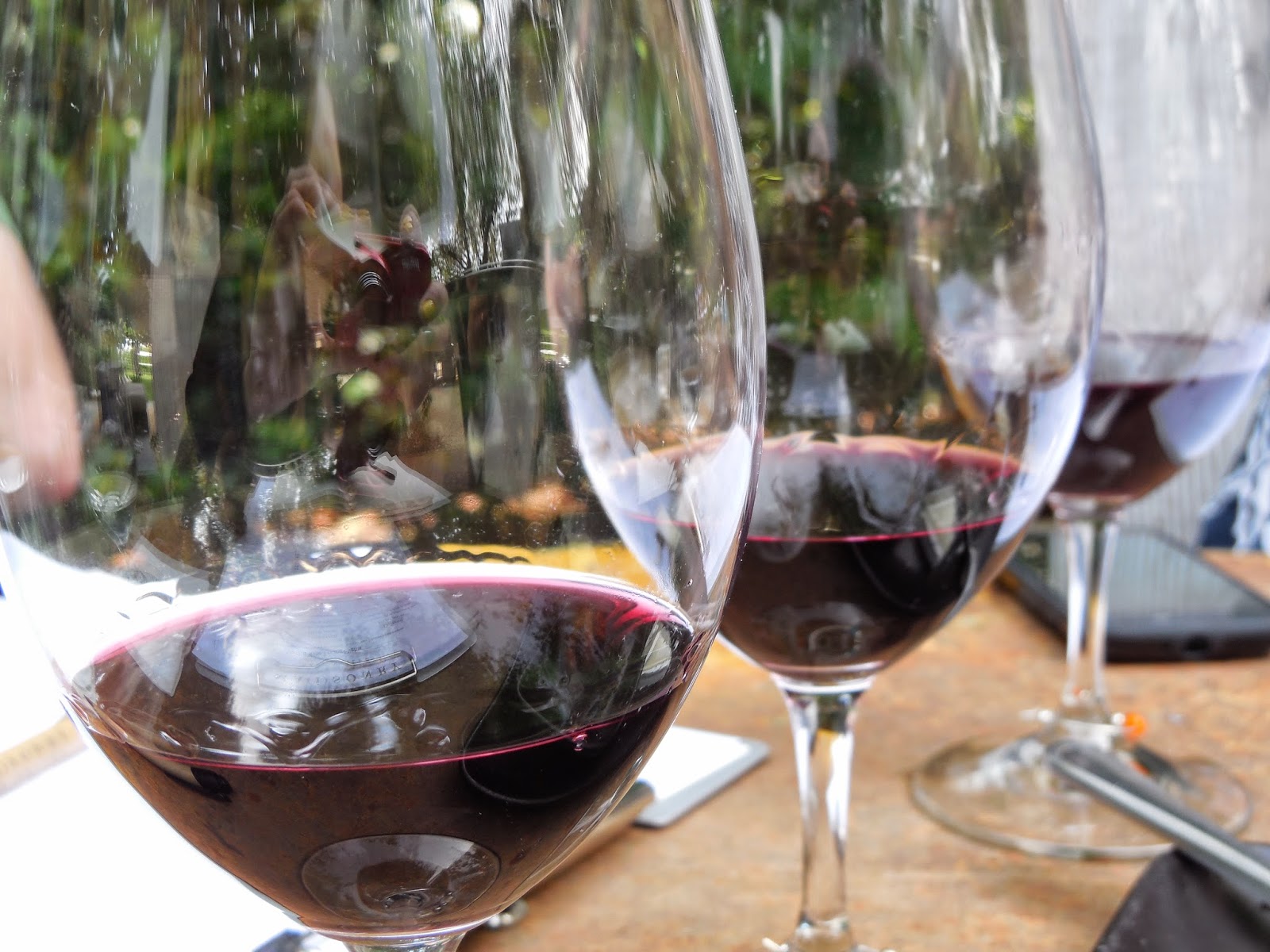 I was still full from lunch and getting a bit tired from this marathon day of tasting, but we decided to soldier on for one more flight: the excellent 2010 Blackbird Contrarian (43% Cab Franc, the rest Merlot and Cab Sauv,) had aromatic cedar on the nose, with berry salad, "poop & dirt," (again, a good thing,) graphite, licorice, and black fruits on the finish.  $125. And I also liked the 2011 Tor Napa Cabernet Sauvignon, a blend of grapes from three vineyards. At first it was very tart and kind of disjointed, but it opened up and smoothed out a great deal with time in the glass. Blueberries, raspberries, applewood, smoke. Stacy said this would be perfect with braised short ribs, and while still full, I agreed. $80

Finally, the 2011 Lail J. Daniel Cuvee Cabernet Sauvignon. With 100% Howell Mountain fruit, this had a nose of bright red cherries and raspberries, with heady yet soft aromatics. In the mouth it showed herb liqueur and a bit of grape soda, with a slightly awkward, tannic finish. It definitely needs more time to develop but shows good promise. $150

Tasting at Ma(i)sonry is a lovely, unique experience. You can make a reservation for parties of various sizes, and sip away in little sections of a charming courtyard or inside the circa-1904 main building. They are developing a partnership with Restoration Hardware and have bought the lot next door for a themed-kitchen expansion, plus are looking into other locations. However, they state that visiting Ma(i)sonry will remain an intimate experience that is always focused on small vintners.

Fully satisfied, I called it a day, and headed off into the sunset to rest and recoup my taste buds for Day Two. This foray into discovering the "smaller players" of Napa was illuminating and I couldn't wait to see what the next day had in store. (Spoiler alert: excellence!) Stay tuned...

Posted by Annie Edgerton at 1:07 PM No comments: