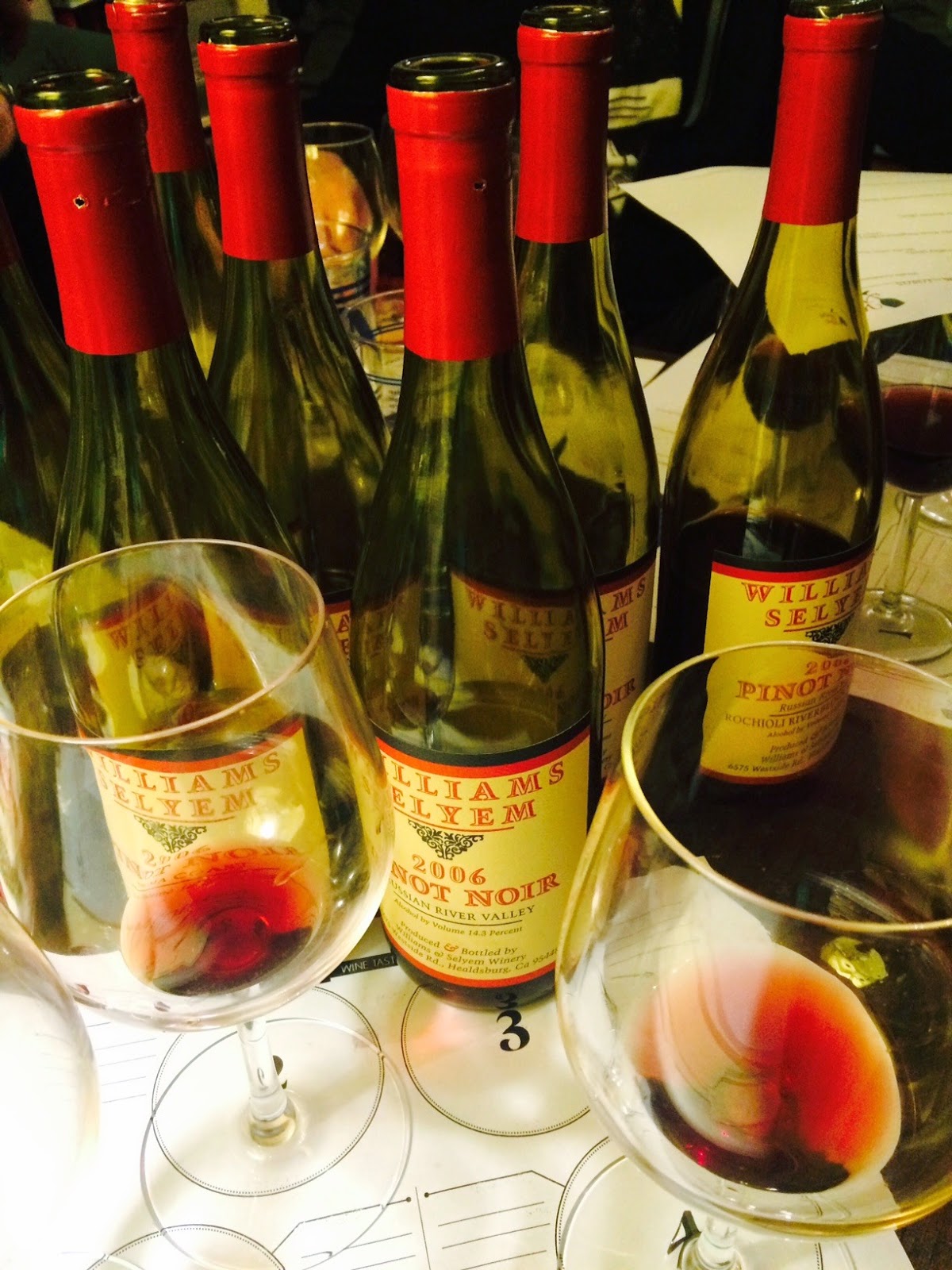 Sometimes a Minx gets very, very lucky, like when a horizontal of the cult favorite Williams Selyem falls into her lap.

(A "horizontal" is a collection of wines from the same producer and the same vintage but with different designations. The more typical "vertical" tasting moves through the same producer but different vintages. Well, neither are really that typical in the grand scheme of things, but an opportunity to taste a horizontal is pretty darn rare!)

I quickly lured a bunch of folks over to taste with me, all intrigued by the concept; with all other things being equal—winemaker, grape variety, vintage—would it be possible to taste the difference in terroir?

The word "terroir" can be a little tricky for Wineaux to explain. To some it merely means the land where the wine is grown, but I prefer a larger scope to define it; the soil, the climate conditions, elevation, aspect (angle of the slope, if any, the vines are planted on,) the history of the area, the winemaker's influence, and so on.

Williams Selyem, located in Sonoma, CA, sources fruit from three different Estate-owned vineyards, and eighteen different grower vineyards, and I had my little hands on seven of their bottlings from 2006. While Sonoma may not be quite as famous as its next-door-neighbor Napa, savvy Wineaux know there is a lot of brilliance to be found there, especially when one is looking for terroir variation.

(Someone once told me that if Napa was like the relatively small, prestigious region of Bordeaux, then Sonoma was akin to the entire rest of France in terms of its diverse terroir.)

Our first flight were the three wines of the group from blended vineyards. We started with the 2006 Williams Selyem Pinot Noir Sonoma Coast, which was bright and flirty with red cherry and pomegranate notes. With fruit from Drake, Coastlands, Hirsch, and Peay vineyards, it was pleasant, but lacked the complexity and personality of those that followed. ($42) [All prices are winemaker's stated release prices.] 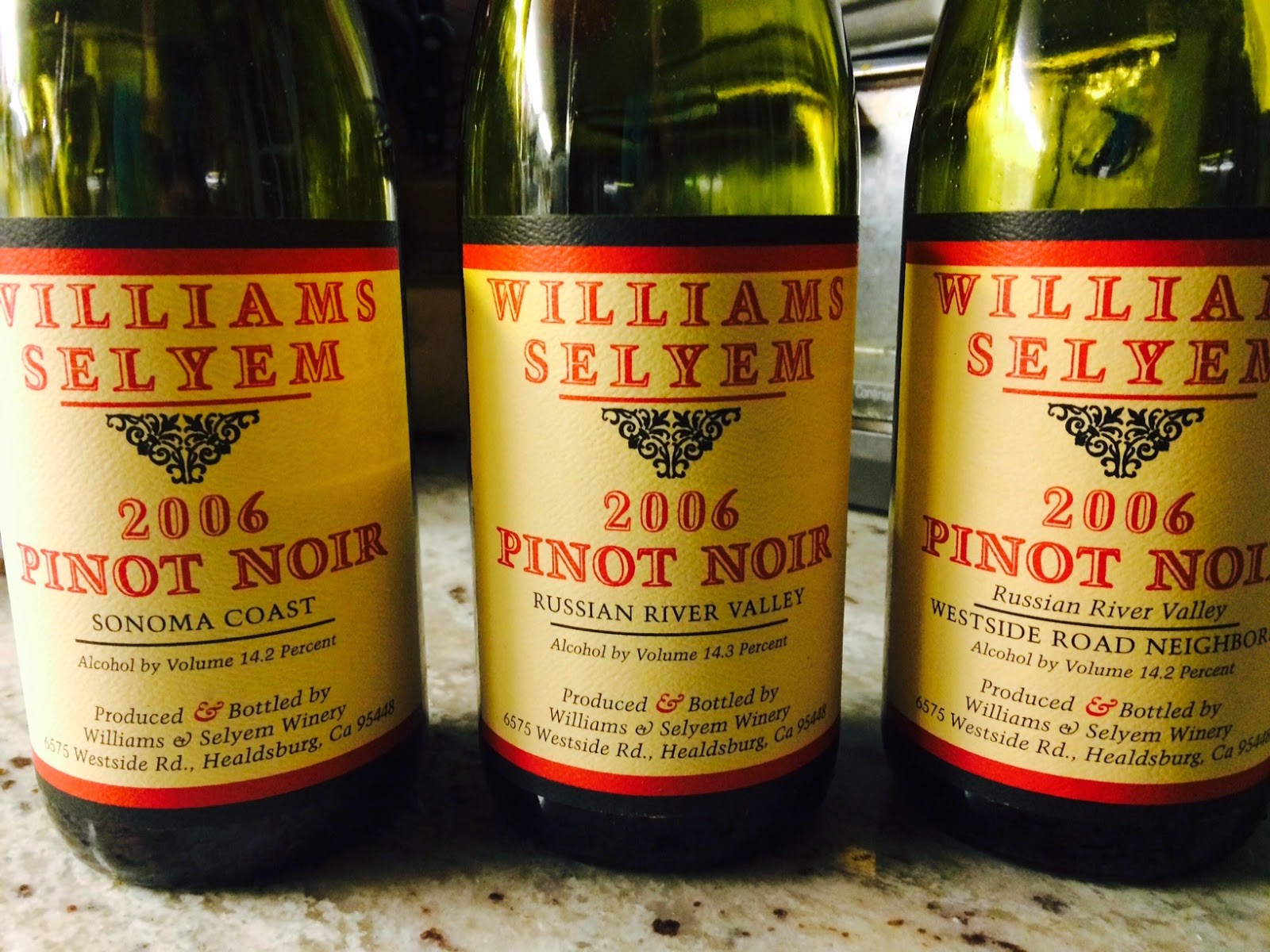 Some of you detail-oriented Wineaux may be thinking, "Sounds good so far, but it's 2015—I'd think 2006s would be a little long in the tooth, right?" While it's true that these wines have almost certainly mellowed with their age, the quality of the fruit and the pedigree of the winery have them showing beautifully. I wouldn't hold on to Pinots from this era for much longer, but given the unanimous enthusiasm of the tasters, they're still going strong.

On to Flight #2—all single-vineyard selections.

I really enjoyed the 2006 Williams Selyem Pinot Noir Bucher Vineyard, with its combo of silky, sexy licorice, and spicy vanilla, caramel, and earth. As I was answering questions, I realized I had slurped mine all up without even noticing! So scrumptious. A perfect example, I think, of how the wine's elements have integrated stunningly over time in the bottle. ($54)

The 2006 Williams Selyem Pinot Noir Coastlands Vineyard was intriguing for its feminine floral perfume, notes of lilac, truffle, and bright ripe cherry. One taster piped up, "I have to say, I was not a big fan of Pinots until right now—the variety, richness, and complexity of these wines is amazing. No idea it could be like this." ($69)

Part of the difficulty in combating preconceptions like that is a wide disparity of Pinots on the market and other factors that keep them out of reach of most consumers. Old world gems from Burgundy can be outrageously expensive, and well-regarded PNs from the US often command high prices, while availability is low. The "Sideways" movie's backlash doesn't help—sales of Merlot plummeted while lower-quality Pinot rushed into the market to capitalize on the influence one character's opinion had on a slew of wine drinkers.

Not that I'm trying to turn you all into cult-worshipers, but this tasting certainly confirms that pedigree and talent are worth seeking out and paying for! 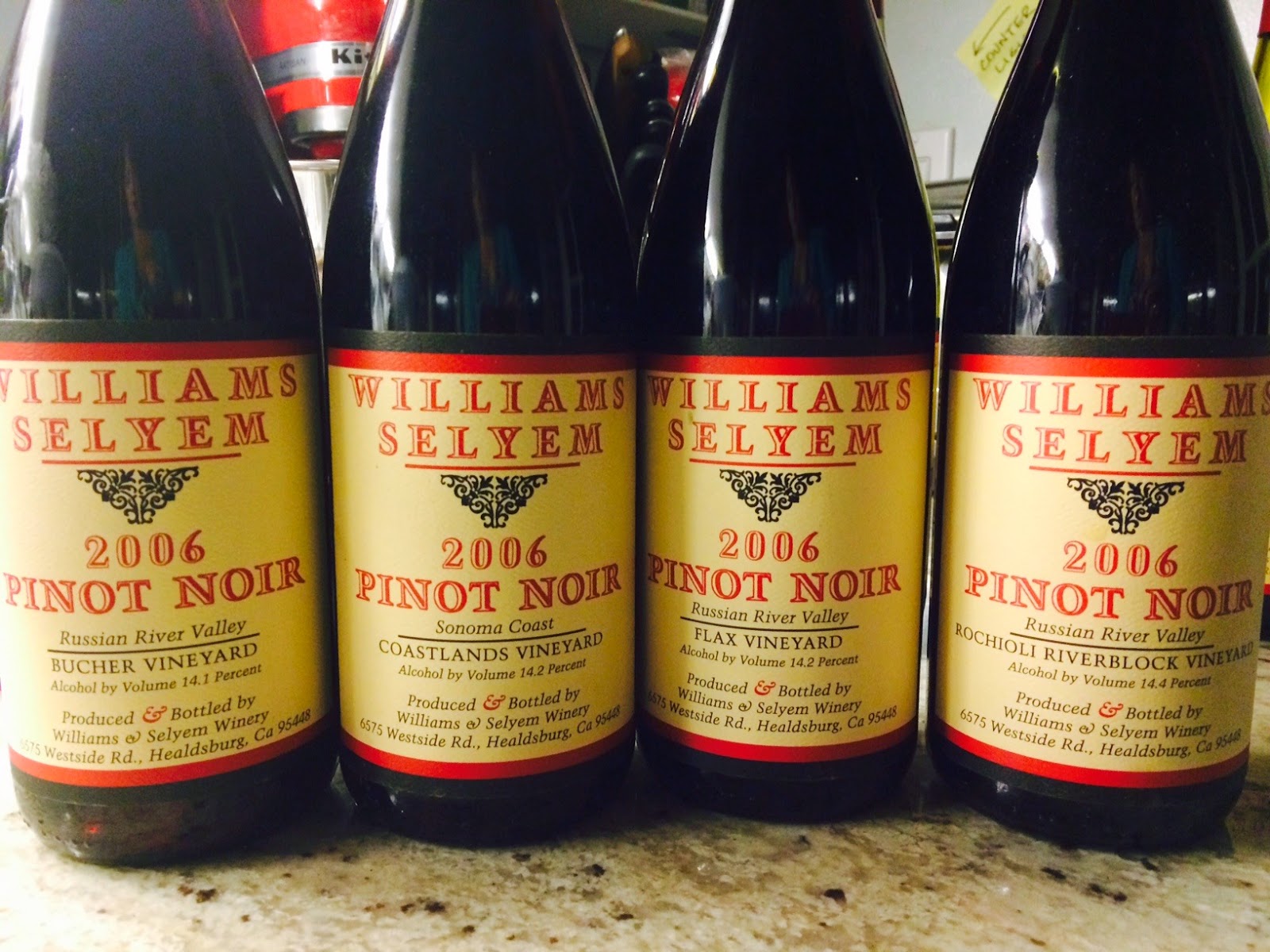 Next up was the group's favorite of the whole evening: the 2006 Williams Selyem Pinot Noir Flax Vineyard. An intoxicating, amazing nose of purple fruit and florals, kirsch, and sasparilla, it also had flavors of bourbon and blackberry on its long finish. Chewy. So tasty. Just—wow. ($54)

Finally, the 2006 Williams Selyem Pinot Noir Riochioli Riverblock Vineyard. Alas, this wine seemed off—not corked or cooked, per se—just muted and dumb in the bottle. I do hope to try another one of this vineyard designation, as I'm sure ours was a fluke of bottle variation, and the winemaker's notes make it sound delicious and voluptuous. While we all agreed this bottle wasn't up to par, it did exhibit notes of cocoa, licorice, and tart red fruit, and was totally finished off by the end of the night! ($75)

So the answer to "can you taste 'terroir?'" was a resounding "YES!!!!" from all of our sippers. Everyone in the group, from relative neophyte to wine professional, was knocked out by the range of different expressions. Many were shocked to discover the depth of flavor found in most of the wines, and now might have an idea why Pinot inspires such fervor in its fans. I for one couldn't have been more pleased to have had this opportunity, and will certainly seek out other horizontal tastings as often as possible!

Posted by Annie Edgerton at 1:30 PM No comments:

Labels: #wine, California, Pinot Noir, Sonoma, terroir, Williams Selyem, wine
Newer Posts Older Posts Home
Subscribe to: Posts (Atom)
ANNIE EDGERTON holds the WSET Diploma in Wine & Spirits, is a Certified Sommelier, and a Certified Specialist of Wine. She is a Wine Appraiser, Consultant, Writer, Educator, and TV host. You can find her sabering open Champagne on any given day.
"Helping people love wine, one sip at a time!"