Frequent readers know I adore good wine from atypical locales. And die-hard Wineaux already know that Hungary is home to one of the world's most exotic, revered dessert wines: Tokaji. ("Toe-kai.") But not a lot of folks know that the main grape of Tokaji, Furmint ("foor-mint,") is absolutely delicious when vinifed as a dry table wine.

Its position under the radar is because there simply wasn't much dry Furmint in the world-wide marketplace until recently. But Hungarian producers are getting their wares out in the U.S. more and more each year, and you should seek some out ASAP — do not pass go, do not collect 200 forint — especially because 2017 was named the "Year of Furmint" by both the SOMM Journal and the Hungarian Ministry of Agriculture.


THIS IS THE ACTUAL YEAR OF FURMINT, YOU GUYS. COME ON!

I sampled some amazing Furmints at the Council General of Hungary in New York City recently, and spoke with some passionate winemakers about this versatile grape. 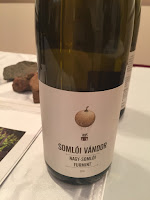 Tamás Kis, Owner and Winemaker of Somlói Vándor, poured his winery's eponymous offering, the 2015 Somlói Vándor Furmint, which had a bright nose of florals and straw. On the palate, it showed notes of quince and lime, and had a charming acidic structure with very good length. Tasty! If you are a Sauv Blanc fan, this one's for you. ~$24.

Also on the lighter side was the 2012 Zafír Dűlő from Erzsébet Cellar. The woman next to me compared it to a white Burgundy, quite the compliment, though I found it lacking a bit of character to agree. Still, it showed yellow apple and lemon on the nose, and was very clean and minerally on the palate. ~$31. 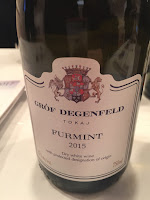 I went "Lady Gaga" over the 2015 Degenfeld Furmint Dry, with its heady floral nose and excellent fruit/acid balance. It was rich-seeming though light and quaffable, with straw, florals, white peach, and a not-overly acidic finish. A great summertime sipper at ~$18.

Tamás Kovács, owner and winemaker at St. Donat Estate, poured his 2015 Marga Furmint Selection Estate Bottled. ("Marga" is the Hungarian term for "marl," which is a soil type related to limestone.) This had a soft nose, but its white floral perfume blossomed in the mouth, accompanied by bright and tangy acid. ~$22. 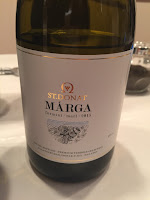 Mr. Kovács came prepared with a wonderful map of Hungary on his iPad, on which he could zoom in to illustrate the volcanic and flatland topography of the major Hungarian wine-growing areas. He also had pictures of his small, round aging vessels. When I asked if they were concrete, he turned up his nose a bit; "This is not concrete. Concrete is the past." I stood corrected; these vessels were porous ceramic stone units, which breathe like oak barrels do, but are totally neutral.

Furmint started to show its spicy side in the 2015 Kvaszinger Hatalos Furmint, along with ginger and melon on the nose. This had integrated acidity and a leesy richness, with a touch of bitterness and long length. ~$27. 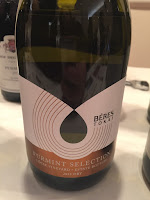 The Spice Girls themselves (what's with the music references today?!) would be overwhelmed by the 2015 Béres Lőcse Furmint Selection Estate Bottled. The nose had rich rome apple and candied melon, but it was a bit schitzo, because in the mouth it was SO dry and SUPER spicy!! Once I got over the difference in expressions, I kept returning to it and wrote, "wow" in my notes. ~$27. 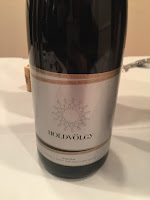 Furmint often gets compared with Chenin Blanc, and I definitely got that similarity with the 2013 Vision Furmint from Holdvölgy. (This was the only 2013 poured, which is too bad, as it Mr. Kis proclaimed it "an excellent vintage.") This had an inviting floral nose with a candied melon presence, flirty and tasty ripe fruit on the mouth, with high acidity. ~$24. 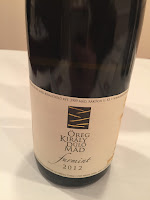 The last dry Furmint of the day was the 2012 Barta Öreg Király Furmint, which had a slightly maderized nose (like a light Sherry,) with a funky barnyard feel and overripe lemon, but on the mouth it was light, lemon-peel acidic, with straw on the finish. I found this really interesting; earthy, but bright. And it also shows that this grape definitely has aging potential. (This one is for you Chardonnay fans.) ~$39 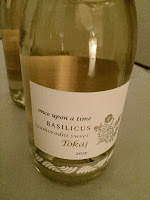 Finally, there was one sweeter style poured; the 2012 Basilicas Szamorodni Tokaji. "Szamorodni" means "as it comes," and refers to the condition of the grapes when picked. This is not like Sauternes, where multiple passes are made throughout the vineyards and individual grapes at optimal ripeness are picked each time; here the bunches with varying degrees of ripe berries will get picked "as it comes." Because of the topography and climate of Tokaji, the dessert-wine grapes will often be affected by botrytis (the "noble rot" that also hits Sauternes, and adds an amazing, distinctive flavor to these wines,) and this showed some botrytis on the nose, with peach, apricot, and vanilla. With about 66 grams per liter of sugar, it was definitely sweet, but not at all cloying, as the amazing acidity keeps it fresh. ~$NA.

As with many unusual varieties/locales, you will have to work a little harder to seek dry Furmints out. But the incredible quality of the wines I sampled above suggest that they will be the darlings of somms and merchants before too long. Furmint is quite reflective of its terroir, so that explains the incredible range of experiences, from super-bright and tangy to richer, rounder, earthier flavors. It's hard to know exactly what you will get from each wine by merely glancing at the label, but grab whatever bottle you can find and start experimenting. I think you might end up freaking out over Furmint yourselves.

Cheers!
Posted by Annie Edgerton at 3:14 PM No comments:

Labels: #wine, Furmint, Hungary, wine
Newer Posts Older Posts Home
Subscribe to: Posts (Atom)
ANNIE EDGERTON holds the WSET Diploma in Wine & Spirits, is a Certified Sommelier, and a Certified Specialist of Wine. She is a Wine Appraiser, Consultant, Writer, Educator, and TV host. You can find her sabering open Champagne on any given day.
"Helping people love wine, one sip at a time!"