You Say ŞARAP, I Say SHUT UP! 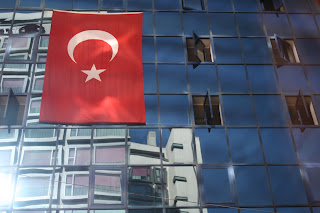 This past May, my Wineau friend Carol and I somewhat randomly chose the beautiful country of Turkey as a tandem vacation destination.

Normally when making international travel plans, I would opt for places with storied wine regions I have yet to visit, like South Africa, Chile and New Zealand.  But the travel package to Turkey was too great to pass up, so I said, "Well, they probably make at least some wine in Turkey, right?"

How was I to know... they make some gosh darn amazing wine in Turkey!

Now, you have almost certainly NEVER HEARD OF THESE GRAPES before.  In the extremely comprehensive 2010 edition of Oz Clarke's "Grapes & Wines" - which lists information on almost a thousand grape varieties - the only Turkish indigenous entry is Boğazkere ('Bo-az-ker-ay').  And all the entry says is, "Turkish grape giving decent, deep-colored, alcoholic wine."

Yes, international grapes like Syrah, Cabernet Sauvignon and Sauvignon Blanc - even Sangiovese and Tempranillo - grow well in Turkey, but it's these quirky native grapes that shine and are completely deserving of awareness around the rest of the world.

So, why haven't we all gone nuts over Turkish wine like we have over Greek wine (with its similarly hard-to-pronounce local grapes) or for wine from other niche countries like Lebanon and Bulgaria?

In terms of identity, Turkey is a primarily Muslim country, albeit a relatively liberal one.  So many outsiders just assume no one will drink wine, let alone make wine there.  NOT TRUE!  But most Turks opt for beer or the local anise-flavored spirit rakı, so it's even hard to get locals excited about their country's wine.  And let's not forget those crazy-named grapes.  Euh-kooz-guh-WHAT?

As for awareness - well, you and I are taking care of that right now, aren't we! 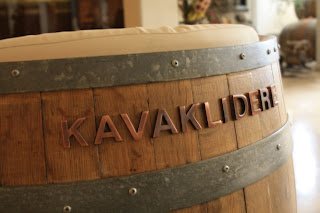 When our tour was in the capital city of Ankara, I was able to arrange a visit at Kavaklidere, Turkey's largest winery.  Mr. Onur Özgül, their foreign trade specialist, took Carol and me on an extensive tour of the facility there, including the on-site bottling operation and a small "test vineyard" outside of the production building.  Then we were joined by Mr. Fehmi Atak, the trading director, to taste through some of their wines.

Kavaklidere is large in volume and production.  It is the only Turkish winery with three centers for grape processing, which reduces the time the picked grapes spend in transport from far reaches of the country.  (Most Turkish wine regions are in the western half of the country, although there are a few notable areas in the east.)  Their portfolio consists of forty-nine different wines (yes, that's a lot!) ranging from entry-level wines up to multiple award-winning prestige offerings, and including semi-sweet, sparkling, and fortified selections.

The only Turkish wine I'd ever tasted before, I realized, had been from Kavaklidere (see my 2011 post on some NYC Wine Bars) - and in Turkey, their wines were prevalent in nearly every hotel bar we passed through... and we passed through a lot.

I won't bore you with details about the little old ladies who come in to destem the grapes by hand, or the length of maceration time for each grape, or the storage capacity for their tanks... but I will say that the effort to run a modern facility that produces wine to be competitive in an international market is quite strong.

Mr. Özgül said with almost a fervor, "This is where wine came from in the beginning.  Wine is a culture in Turkey; we need to develop this culture."

Kavaklidere does export twenty percent of their production, mostly to Turkish restaurants in other countries.  But a recent search on wine-searcher.com also showed a decent amount of Kavaklidere wines available at wine stores in the States.  (With mid-range wines priced $8-12 and the Prestige topping out at $30, you can definitely afford to give them a try!)  While they do want to raise brand awareness at home, Mr. Özgül said their "goal is to present our wines in international markets, not only in Turkey." And recently, their efforts have intensified and paid off - over the past five or six years, they've attended more and more international wine competitions, and the medals have started to pile up.

In addition, Kavaklidere is proud that in a historically male-dominated society, both their prior and current winemakers are women, and also that their company's team is mostly young with a large amount of women members.  It is a vibrant, modern group, passionate and ready to bring Turkish wine to the world.

Sadly, just as their trajectory is intensifying, they are being hobbled by governmental controls.  While I was in Turkey, strict legislation banning all advertisement of alcohol and restricting hours of sale was passed.  While neither of my Kavaklidere hosts alluded to these harsh restrictions, their business will almost certainly suffer.  The future of the Turkish wine industry is one more uncertainty stemming from governmental crackdowns and subsequent public dissatisfaction.

(For a firsthand take on the situation in Turkey that began while I was there - the protests about razing trees in Gezi park, the subsequent overly-harsh reaction by police using tear gas and water cannons, and the escalating protests that encapsulated many peoples' anger over too-strict government controls - please see this post on my personal blog.)

Okay, okay - I know you really want to get down to business: WHAT ABOUT THE WINES?! 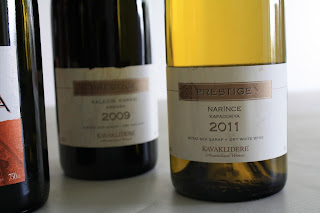 We started with the 2011 Prestige Narince, a single-vineyard, 100% Narince from Kappadokia.  It was medium-pale straw gold, with a nose of apple, hay, minerals and lemon.  In the mouth, there was tropical fruit and lush minerality, noticeable terroir, with medium acidity and a long, creamy finish.  A very nice wine, a bit reminiscent of a well-made unoaked Chardonnay.

Also from the volcanic soils of Kappadokia was the 2011 Côtes d'Avanos Narince-Chardonnay.  (If Narince evokes Chardonnay, it's no surprise they would blend well, yes?)  About 70% Narince, 30% Chardonnay, this spent nine months in French oak barrels.  A medium yellow gold, with a nose of honey, lemon, and a little butter, in the mouth it showed a steely minerality and very clean finish with medium acid. 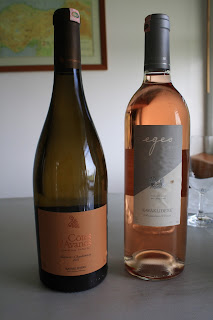 I quite enjoyed the 2012 Egeo Roze (rosé) from Anatolya.  A blend of 60% Çal Karası and 40% Grenache, it had a pale color of salmon/ onion skin.  The nose was warm, of light tart cherry fruit and minerals.  It was very, very dry, with lots of acidity but not too bracing, and fruit that went on and on, with rose petal and geranium florals and a bit of salinity.

2012 was a difficult vintage in Turkey, but some wines showed well, like the above roze and the 2012 Ancyra Muscat.  This grape is similar to Muscat of Alexandria but local - there are numerous variations of the Muscat grape all over the world.  Although this had nine milligrams of residual sugar, it exhibited dry.  The color was a very pale greenish gold.  Across the board, this showed tremendous varietal character - incredible floral aromatics, very light and refreshing, with medium acidity, a little residual CO2 'shpritz' and a note of taffy candy.

Now to the reds! 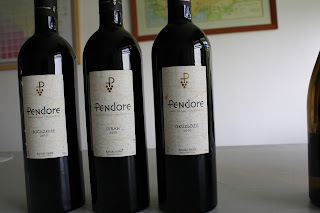 First up, the 2010 Pendore Öküzgözü (I was told that's Turkish for "bull's eye," though Google Translate doesn't seem to agree.) It is from an area near Izmir, a city on the Aegean seacoast, and is medium-dark ruby, with a nose of dusty terroir and berry salad.  In the mouth there is red plum to boot, and it is rich in earthy/berry flavor but light in style with good acid and soft tannins.

Next we sampled two more from the Prestige line, first the 2009 Prestige Kalecik Karası.  This grape actually originated in Ankara, about 40 km from where we were tasting.  It was light garnet in color, with a nose of dried cherry and sage, and in the mouth there was a hint of oak and lots of violet florals with a loooong well-balanced finish.  (I wrote, "yummmmy" and even put a star next to it.) If you're a fan of Pinot Noir, this would be right up your alley... it was very quaffable and I was wishing we'd stop spitting and have some hors d'oeuvres already.

Finally we tasted the powerhouse of the group, the 2009 Prestige Boğazkere.  That word means "throat-burning," which you'd think would normally put tasters off, but as it was the most structured and tannic of the group, I kind of see what the ancient Turks were going for when they named it.  It came from a vineyard in Diyarbakır, which is the most south-eastern wine region in Turkey. This was a dark ruby color with a nose of cherry liqueur, wet leaves, and blueberries.  In the mouth, there was tart red fruit yet it had a masculine feel with a very long finish.  It was definitely different and interesting (though I also wrote, "a little strange," but you all KNOW how I love weird wines!)

Unfortunately, we were not able to stay longer and go through the 42 other wines, but I would have certainly made the attempt if asked!  While some of the entry-level Kavaklidere offerings that I had been able to try in other parts of Turkey were very simple, fine but forgettable, the majority of these wines I found very impressive.


Although there is currently a relatively low availability of these wines in the States, I encourage you to make the effort to seek out Kavaklidere and other Turkish wines (Kayra is another good and somewhat avaliable producer; I have tasting notes from the very yummy 2009 Kayra Vintage Öküzgözü Single Vineyard on my Wine Minx facebook page.)

Wineaux like myself are doing what we can to encourage importing and distribution, as so many of us have gone gaga over these wines once we've had the privilege of tasting them.  I look forward to hearing about your Turkish-wine-treasure-hunt, and what you think about them!

Since the choice of Turkey as a vacation destination was really quite random, I truly felt as if every wonderful thing I came across there was a special gift; the people, the scenery, the history, the food, and especially the wine.

If Turkey has not yet been on your radar, I strongly suggest you put it at the top of places to visit next!

Labels: #wine, travel, Turkey, Turkish wine, wine
Newer Posts Older Posts Home
Subscribe to: Posts (Atom)
ANNIE EDGERTON holds the WSET Diploma in Wine & Spirits, is a Certified Sommelier, and a Certified Specialist of Wine. She is a Wine Appraiser, Consultant, Writer, Educator, and TV host. You can find her sabering open Champagne on any given day.
"Helping people love wine, one sip at a time!"