NAVIGATING 2011 BORDEAUX... IS IT WORTH THE EFFORT? 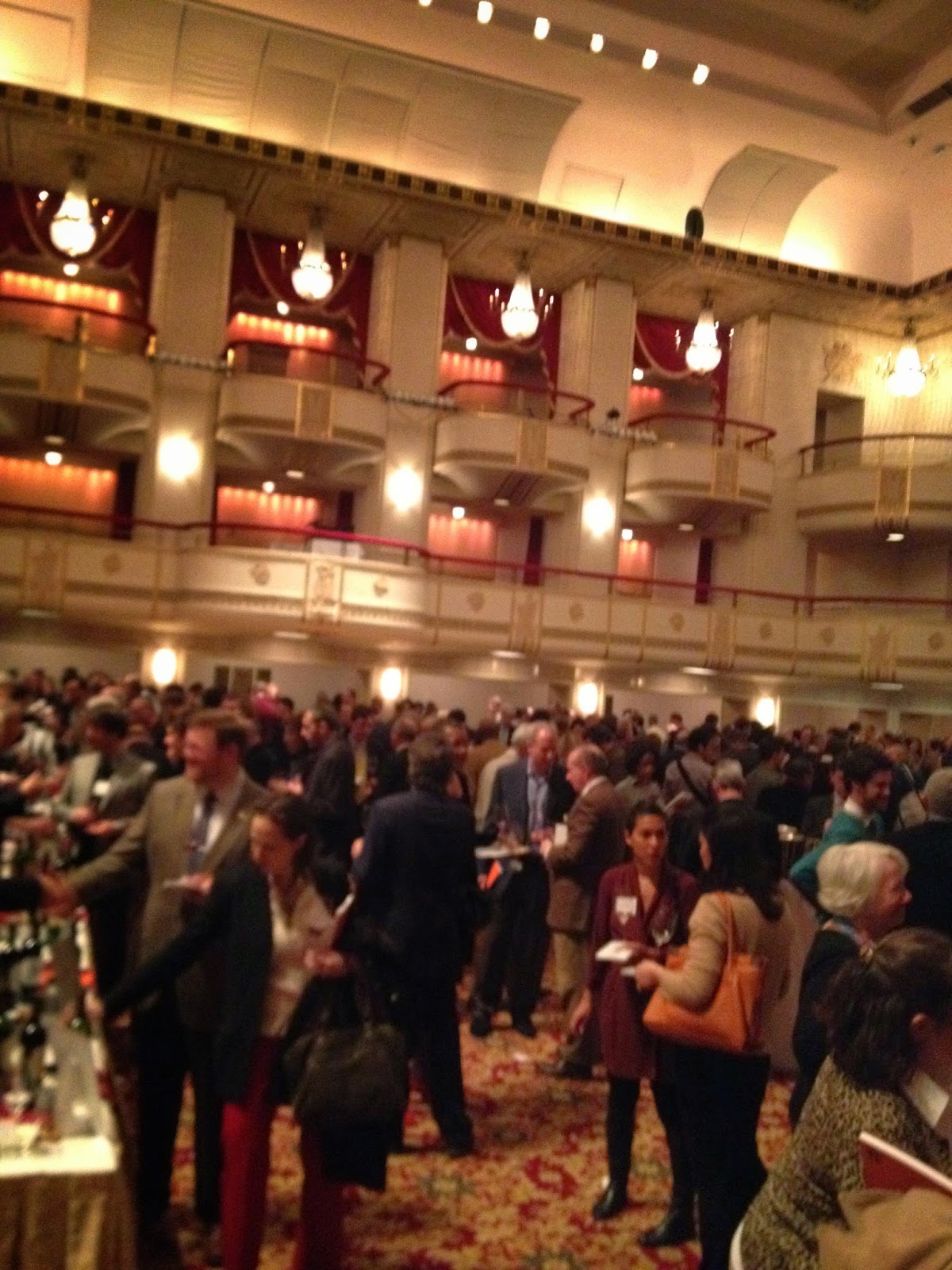 While the title of this post may not suck you in quite like that of a time-wasting buzzfeed quiz, the fact remains that the 2011 vintage in Bordeaux is a bit snarky and is going to require some effort on your part to seek out the best it has to offer. But fear not, there is very good wine to be found!

Coming on the heels of the back-to-back stellar vintages of 2009 and 2010, Bordeaux's 2011 vintage was defined by topsy-turvy weather throughout the growing season which challenged the region's winemakers. However, savvy Wineaux can find some gems that also benefit from a "lesser" vintage's general reduction in price.

Absent a coveted invitation to the "en primeur" tastings in Bordeaux (a sneak-peek for industry professionals,) my first introduction to the new vintage is the Union des Grand Crus de Bordeaux tasting held in New York each January. This year, 99 Châteaux presented offerings in a crowded ballroom at the Waldorf-Astoria.

An early thought was that the 2011 white Bordeaux survived the difficult vintage fairly well. The 2011 Ch. Bouscaut Blanc (Pessac-Léognan) had a nose of light florals and herbs, with a dry, steely finish of bright acidity and refreshing lime notes. ~$32

I also quite enjoyed the 2011 Ch. de Fieuzal Blanc (Pessac-Léognan). Nose of ripe melon and taffy, with a solid, well-balanced finish of balanced fruit and crisp acidity. ~$58

Another favorite was the 2011 Ch. Larrivet Haut-Brion Blanc (Pessac-Léognan), with lush stone fruits and a bit of straw, a rounder expression in the mouth yet still very good acidity. ~$42

On to the reds! First stop was the St.-Emilion sub-region of Bordeaux, on the "Right Bank" of the Dordogne River, where Merlot dominates the blend. The 2011 Ch. Canon (St.-Emilion) showed a nice soft berry nose with cassis, licorice, and violets. In the mouth, the smooth bright red fruit was balanced by good tannins and a little vegetal note on the finish. ~$115

The 2011 Ch. Figeac (St.-Emilion) had lush fruit on the nose, with a bit of earth and sweet oak. The laser-like raspberry in the mouth was balanced by not-overbearing tannins. ~$123

More berries were found in the 2011 Ch. Pavie Macquin (St.-Emilion)—my notes say, "Incredible nose! Berry salad galore!"—and the palate was packed with fruit and some woodsy notes. This has excellent potential to develop, but the nose is already intoxicating. ~$70 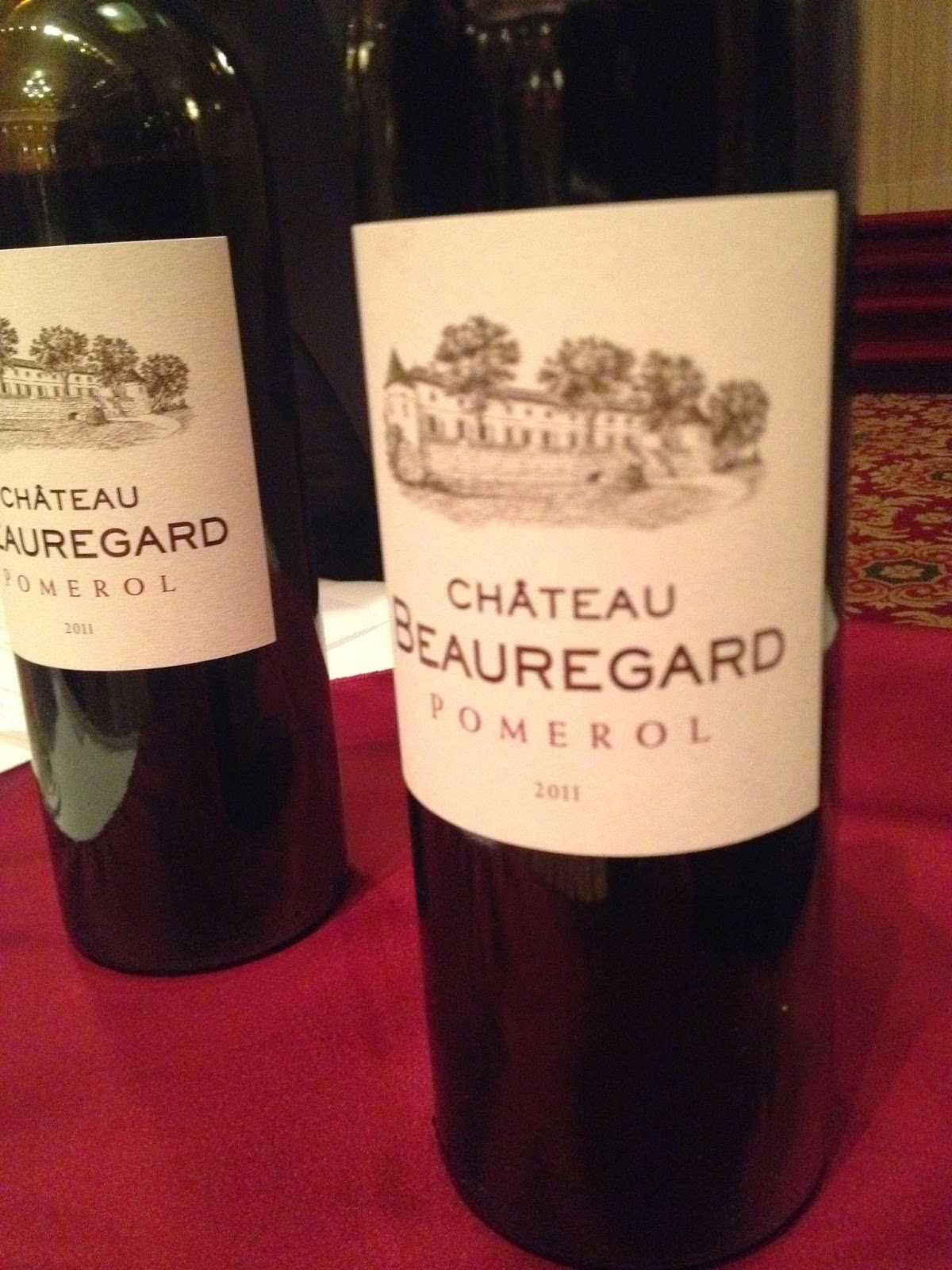 Moving a bit west to the tiny region of Pomerol, the blacker fruits of Merlot come forward. One favorite was the 2011 Ch. Beauregard (Pomerol). Complex nose of earth, herbs, chocolate, and blackberry. Velvety mouthfeel, with violets and blackberry liqueur. Very nice! ~$50

The 2011 Ch. Le Bon Pasteur (Pomerol) had a nose of black cherry and blackberry which came through in the mouth, as well as a touch of charcoal; nice weight, very decent. ~$67 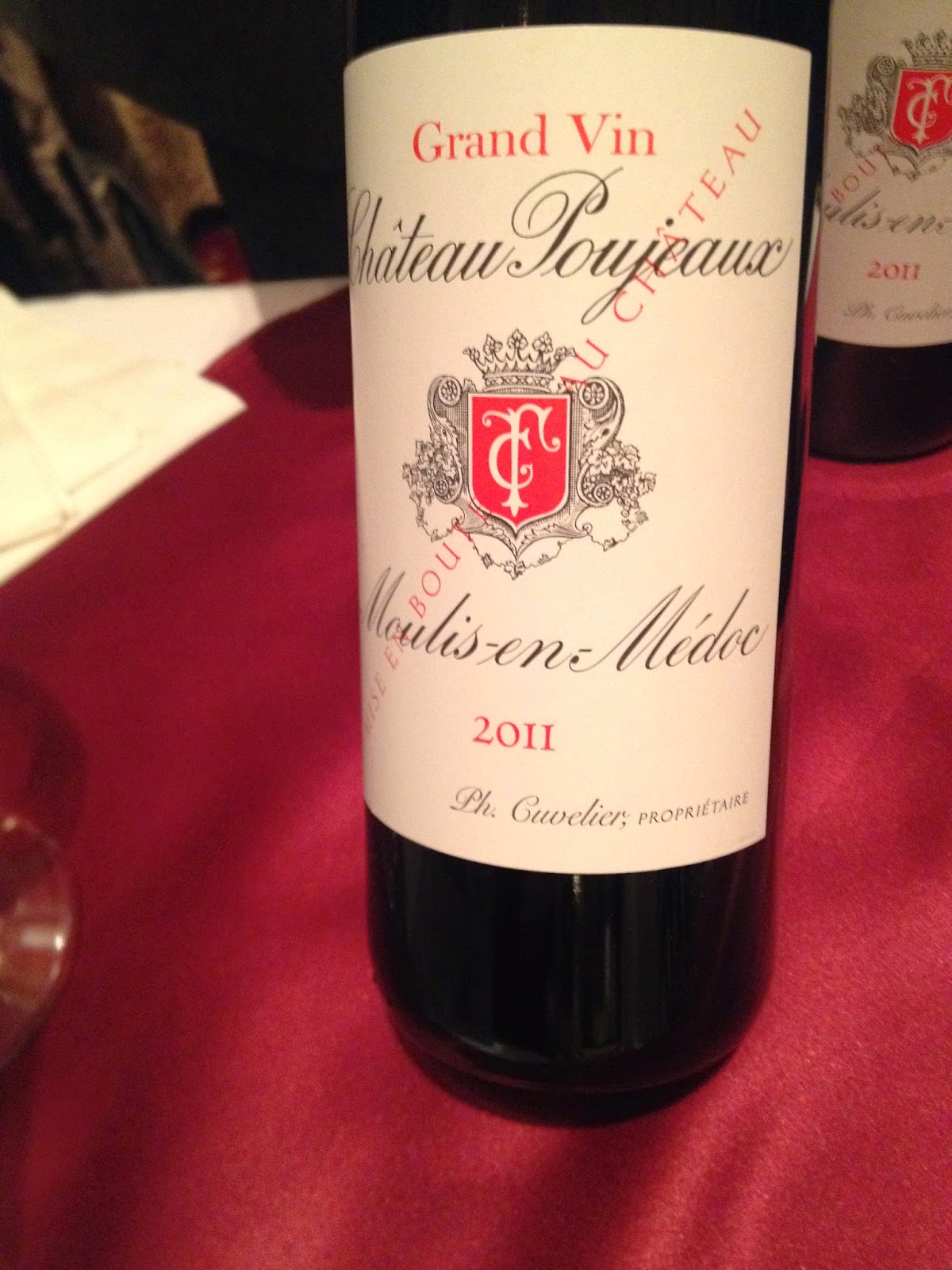 And the 2011 Ch. La Conseillante (Pomerol) was solid, with a nose of earth and lavender, integrated tannins and a quite smooth finish. Very nice. ~$125

Coming around to the "Left Bank," where Cabernet Sauvignon is king, a standout for me was the 2011 Ch. Poujeaux (Moulis-en-Médoc) with a kind of flirty nose of red berry and cassis. A very elegant fruit expression rises out of its structure, and it is an incredible value at ~$36 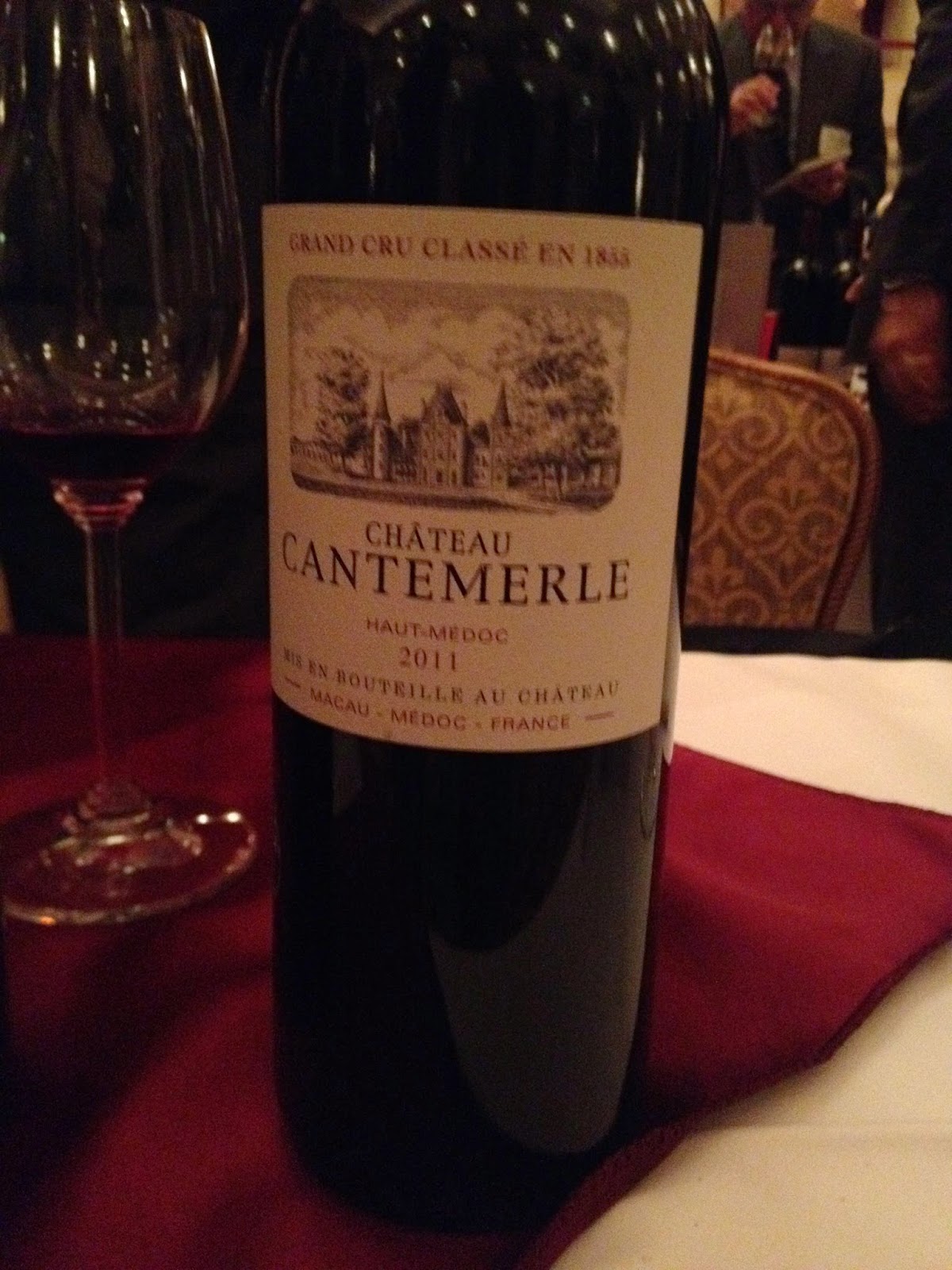 My mother has long been a fan of Château Cantemerle, so I had to try their latest offering: the 2011 Ch. Cantemerle (Haut-Médoc) showed dark fruits, wood, and earth. There was an excellent balance in the mouth although it didn't overpower. I'd say it's quite approachable for drinking earlier (maybe I need to stock some for her birthday!) ~$35 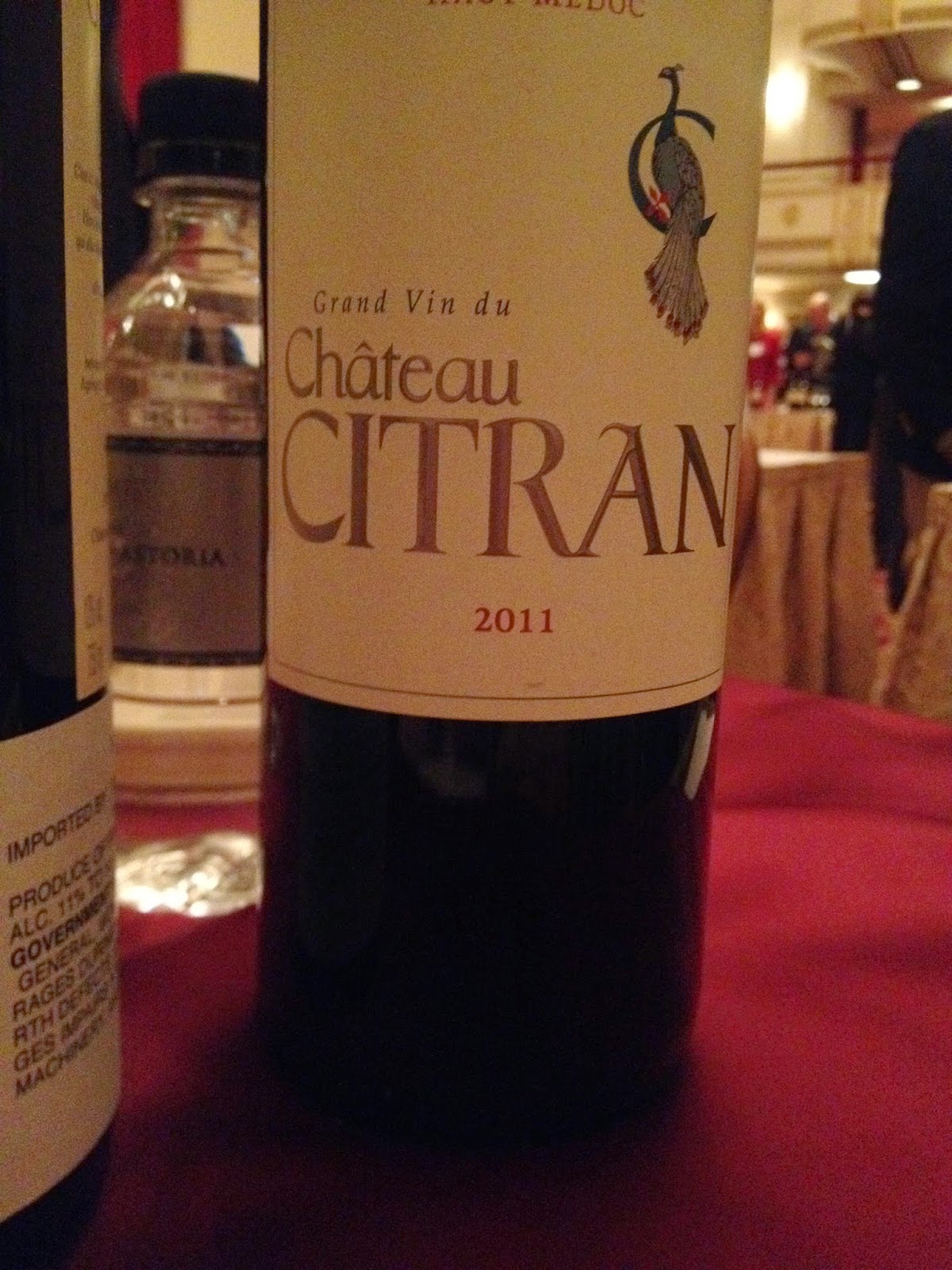 I found the Ch. Citran (Haut-Médoc) very interesting. It had a lovely, intriguing nose (my notes say, "Got a whiff of... CELERY?!") With lots of dark fruit in the mouth, balanced by a nice brightness. ~$24

And the 2011 Ch. La Tour de By (Médoc) had a nose of blackberry pie and earth. It showed a bit lighter in the mouth than I had hoped, but there was a very decent fruit expression and solid balance. ~$25

Arriving at the Margaux tables, I was knocked out by the 2011 Ch. Brane-Cantenac (Margaux)—with a round, very fruity nose, (notes read: "OOOH,") and a palate full of red berry liqueur and terroir, this was exceptionally well-crafted. ~$55

And its next-door neighbor shone as well: the 2011 Ch. Cantenac Brown (Margaux) had a nose of earth and berry syrup, with a nice complexity in the mouth and strong cherry notes—elegant, rich and luxe. ~$52

Another fave was the 2011 Ch. Labégorce (Margaux). Although the nose was light, it had a lovely note of licorice, and then showed extremely dense and velvety in the mouth, with some bright red fruits, blackberry and black cherry, a touch of earth and herbs, and some chocolate. Yum. ~$30 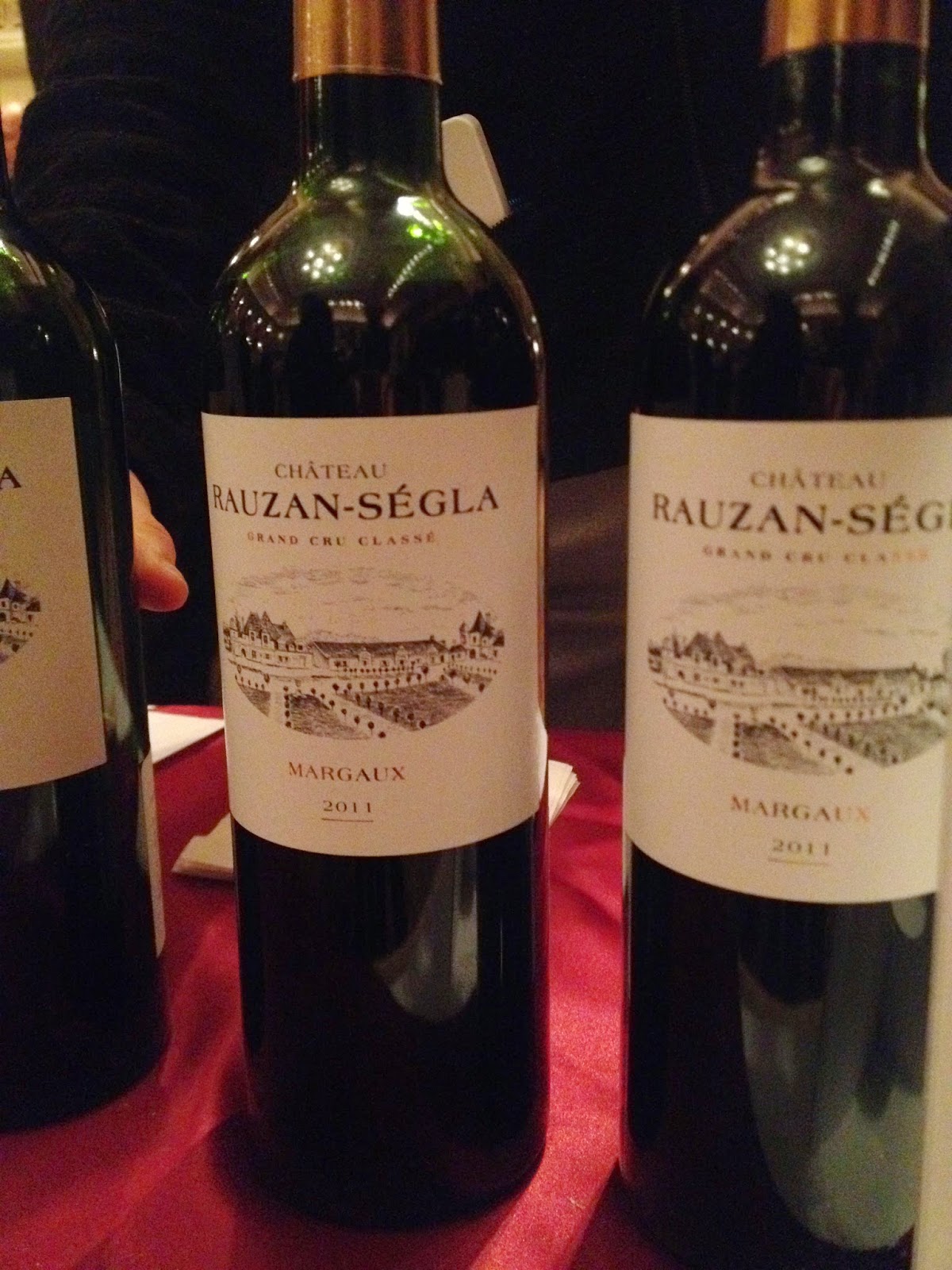 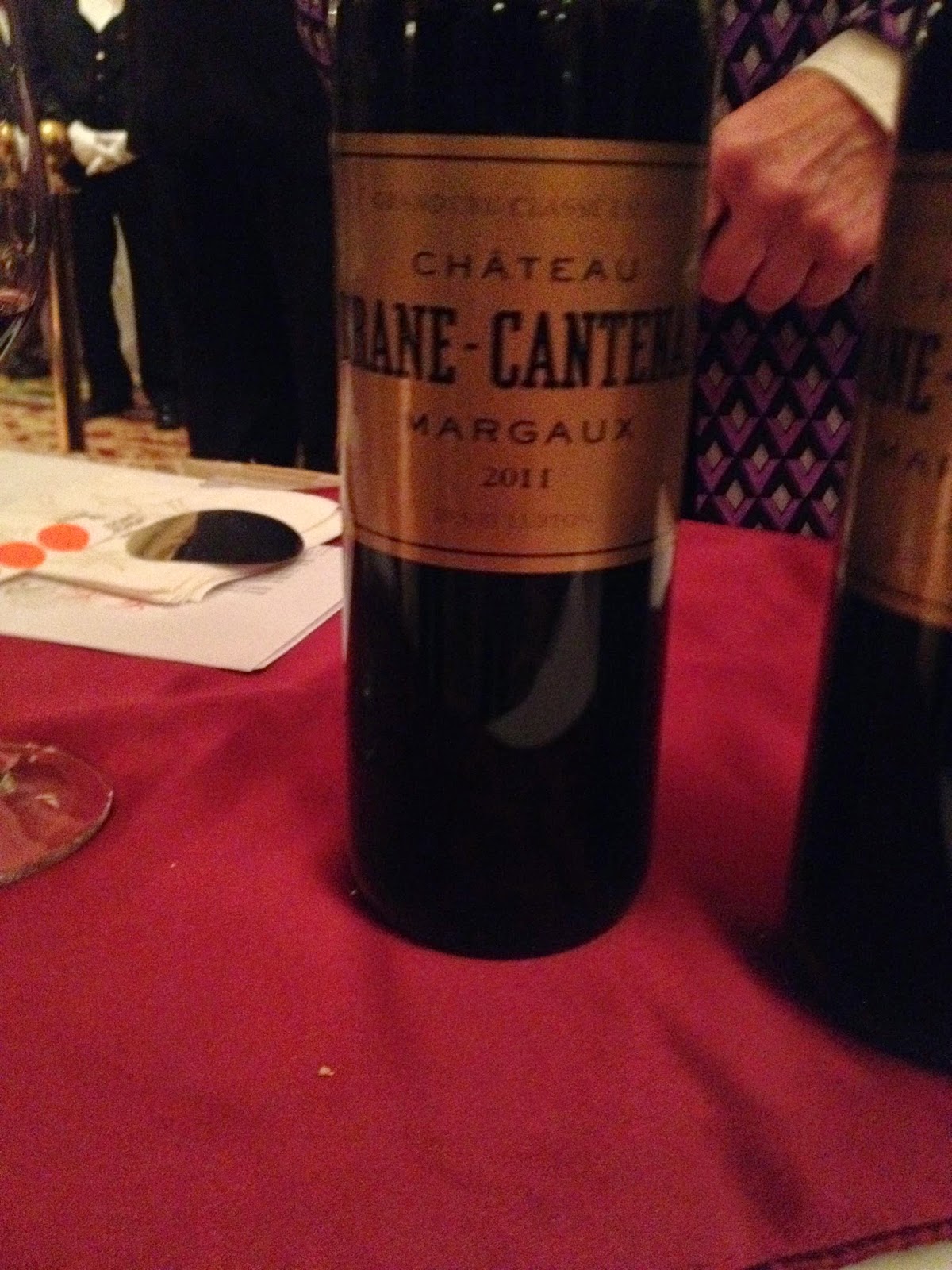 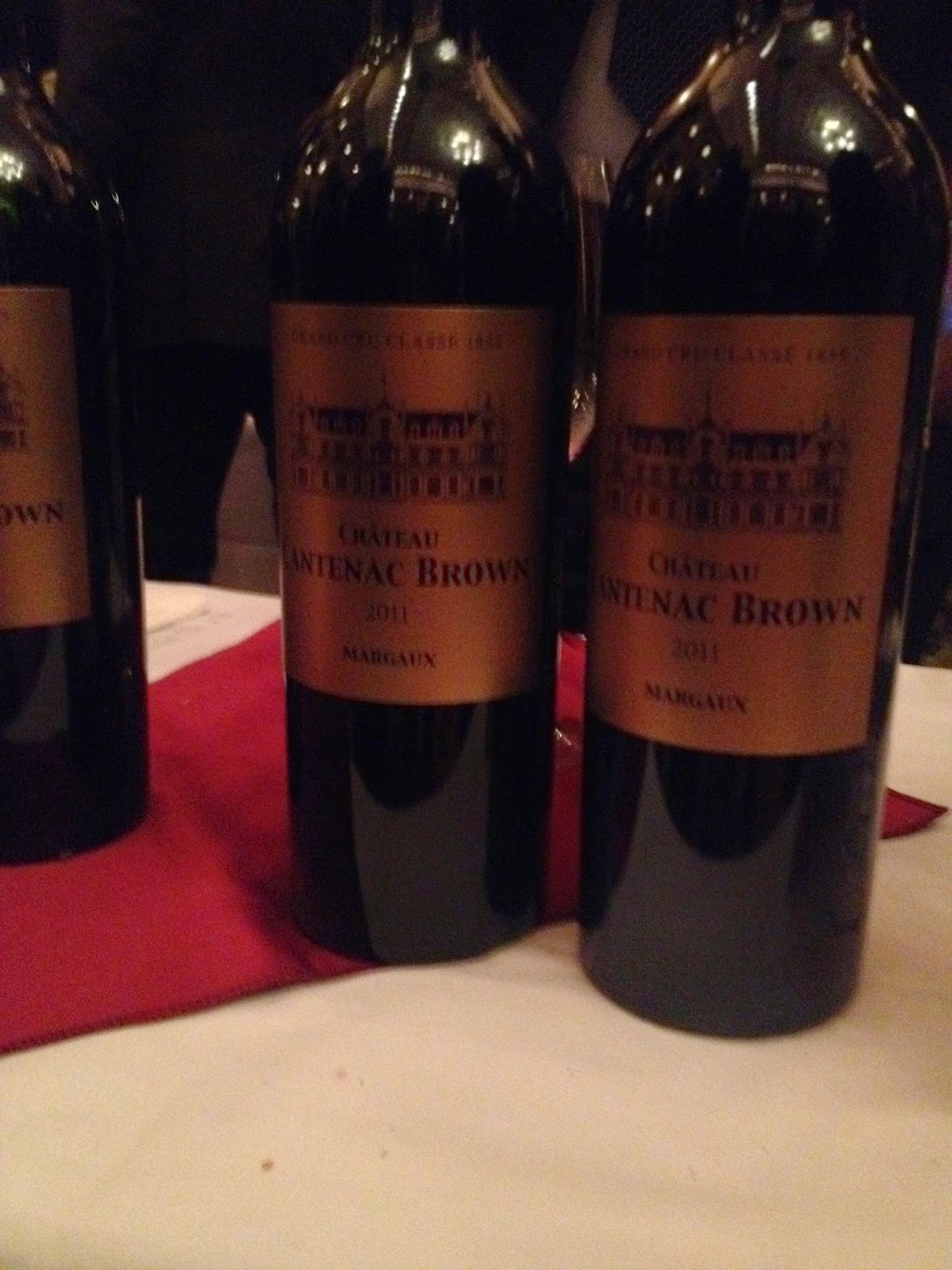 I also was taken with the 2011 Ch. Rauzan-Ségla (Margaux) and its interesting nose of many soft components which exploded into "loads and loads" of lush red and black fruits. Some cherry-berry "sweetness" headed up this fruit-forward wine. (A little more "New World" in style, for those of you who don't love those earthy and tannic elements.) ~$95

The 2011 Ch. Giscours (Margaux) had interesting notes of cola and mesquite on the nose, and was a very solid style, though it definitely needs time to develop. ~$50 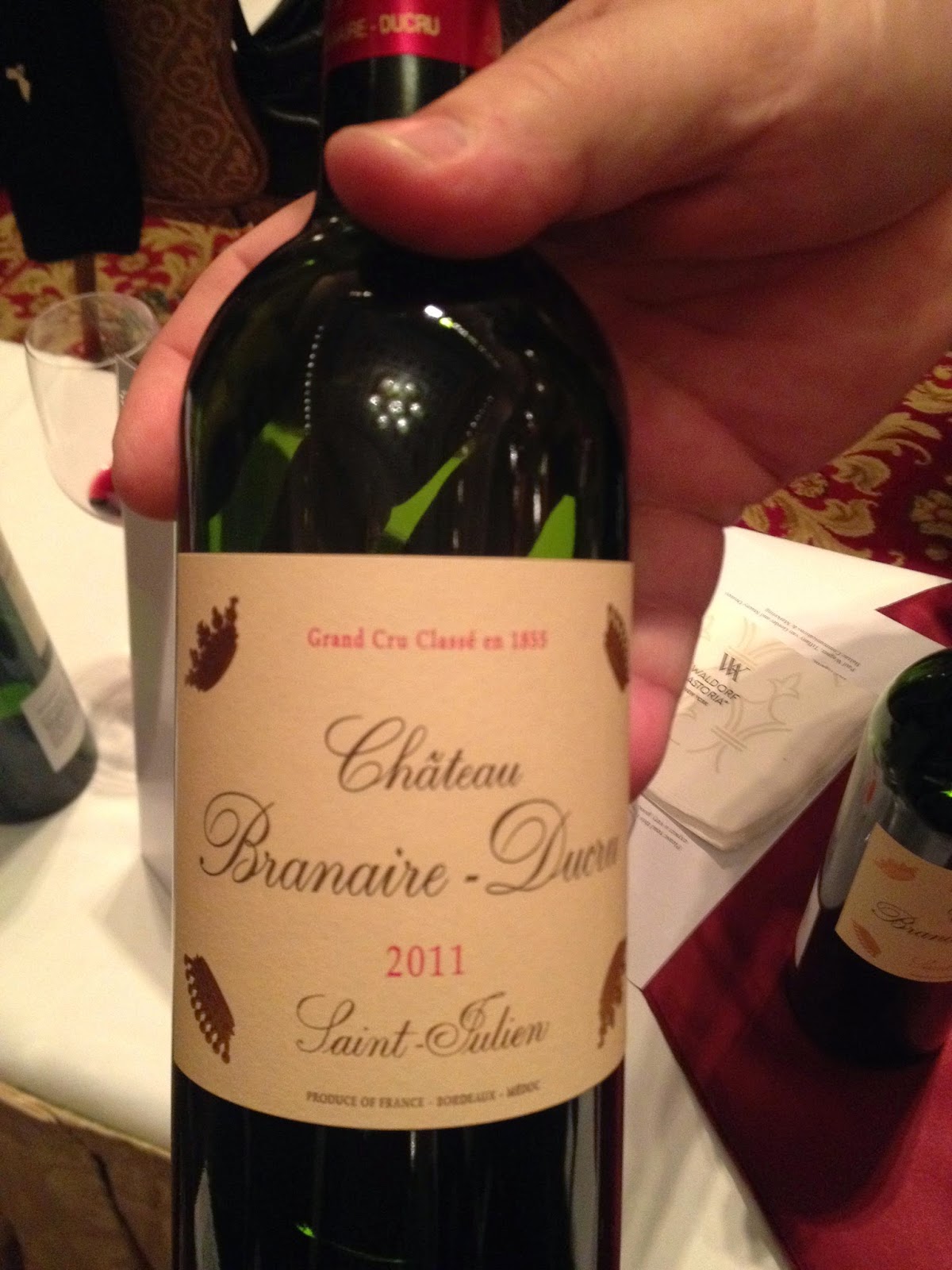 I headed next to the St.-Julien section of the ballroom, and was very impressed with the 2011 Ch. Branaire-Ducru (St.-Julien). Lots of cedar and earthy terroir on the nose, "this is amazing," great plum fruit, nice earthy elements, very balanced and a rich mouthfeel. ~$55

Sometimes tasting these pre-release Bordeaux feels like infanticide as they can be so overpoweringly structured in their youth, but in tricky vintages like 2011 you can find wines that are pretty approachable and consumable even now, like the 2011 Ch. Gruaud Larose (St.-Julien). It had a nose of cocoa and cinnamon ("ooh, yeah...") lots of fruit and mesquite, and although relatively light, was well-balanced on the finish. ~$65 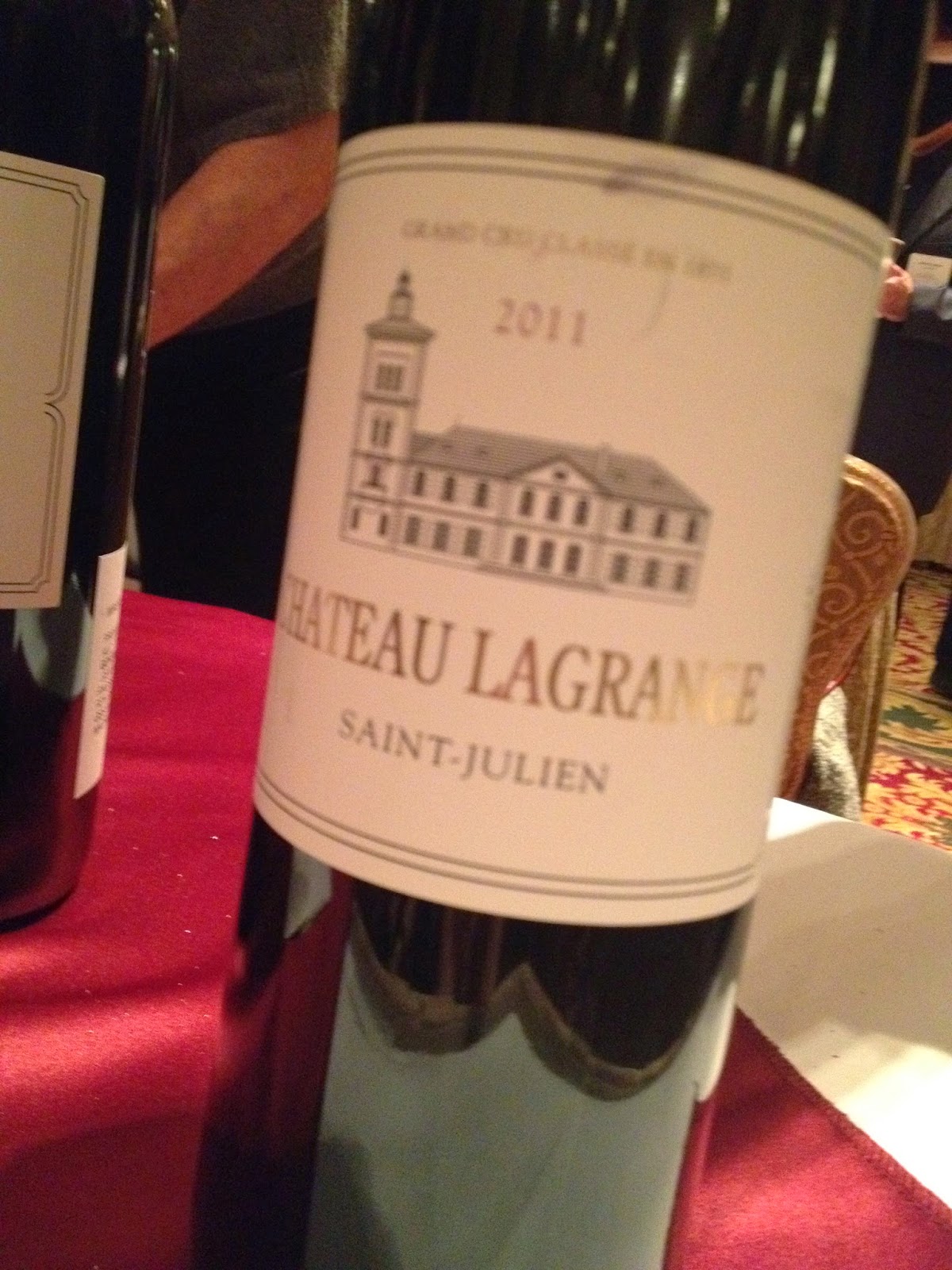 I also loved the 2011 Ch. Lagrange (St.-Julien) with its very herby, rosemary, and cherry liqueur nose. With a velvety finish, it was extremely balanced. "Yummy & sexy & I like a LOT." ~$60

I'm typically a fan of the Léovilles, but think they both need much more time to develop: the 2011 Ch. Léoville-Barton (St.-Julien) was a bit fumbly, although its masculine, leather elements were balanced by lots of berry fruit and mint. ~$75  And the 2011 Ch. Léoville-Poyferré (St.-Julien) had a great nose of earth, forest floor, and dark fruits, but was very tart and acidic in the mouth. ~$80  I expect these both to flesh out with time, however. 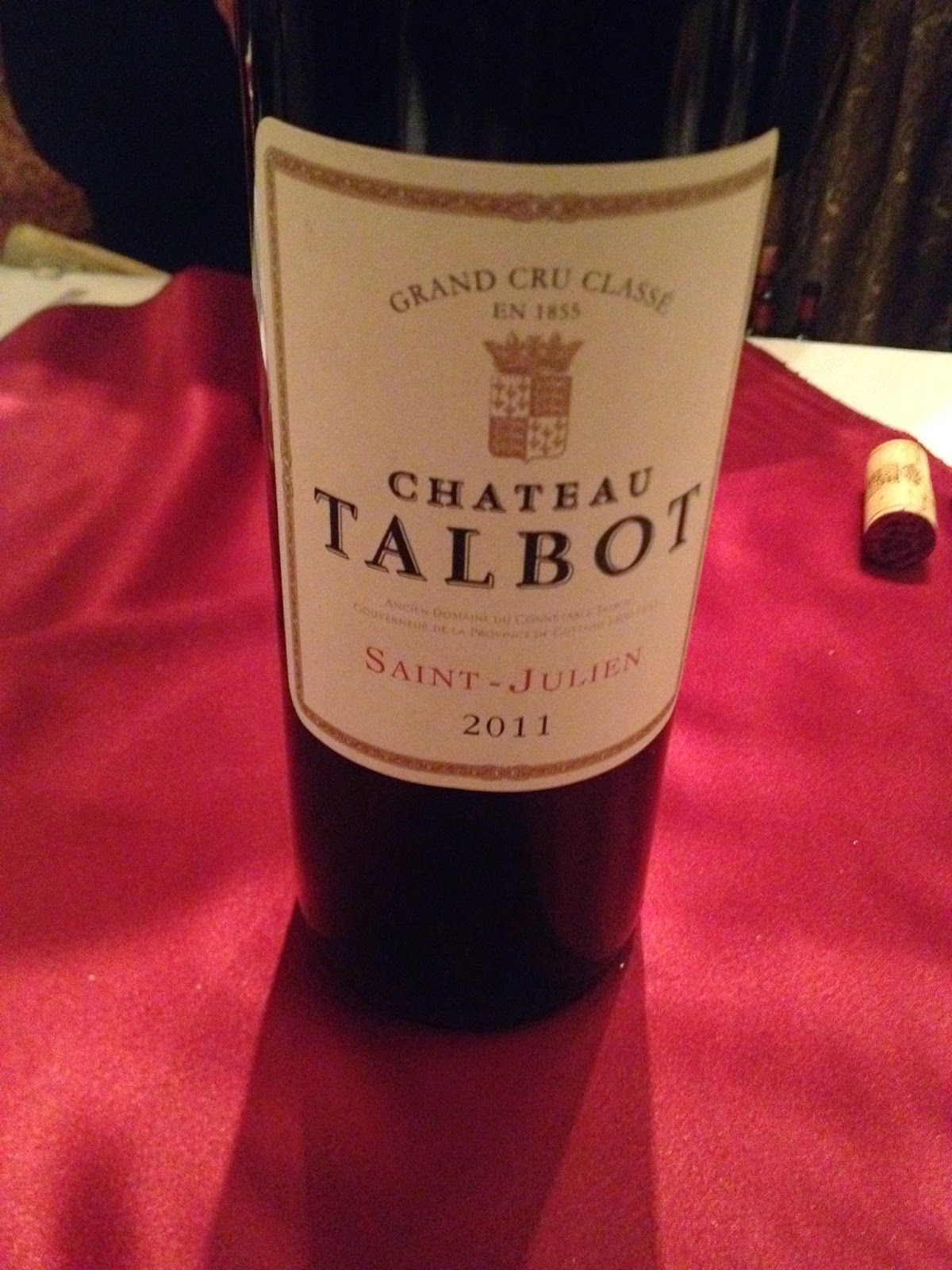 I did love the 2011 Ch. Talbot (St.-Julien) with its earth, cedar, and pine-y nose. More of an old-world style, it had a long, balanced finish with integrated tannins. Perhaps less fruit expression than many, but very good as it is. ~$50 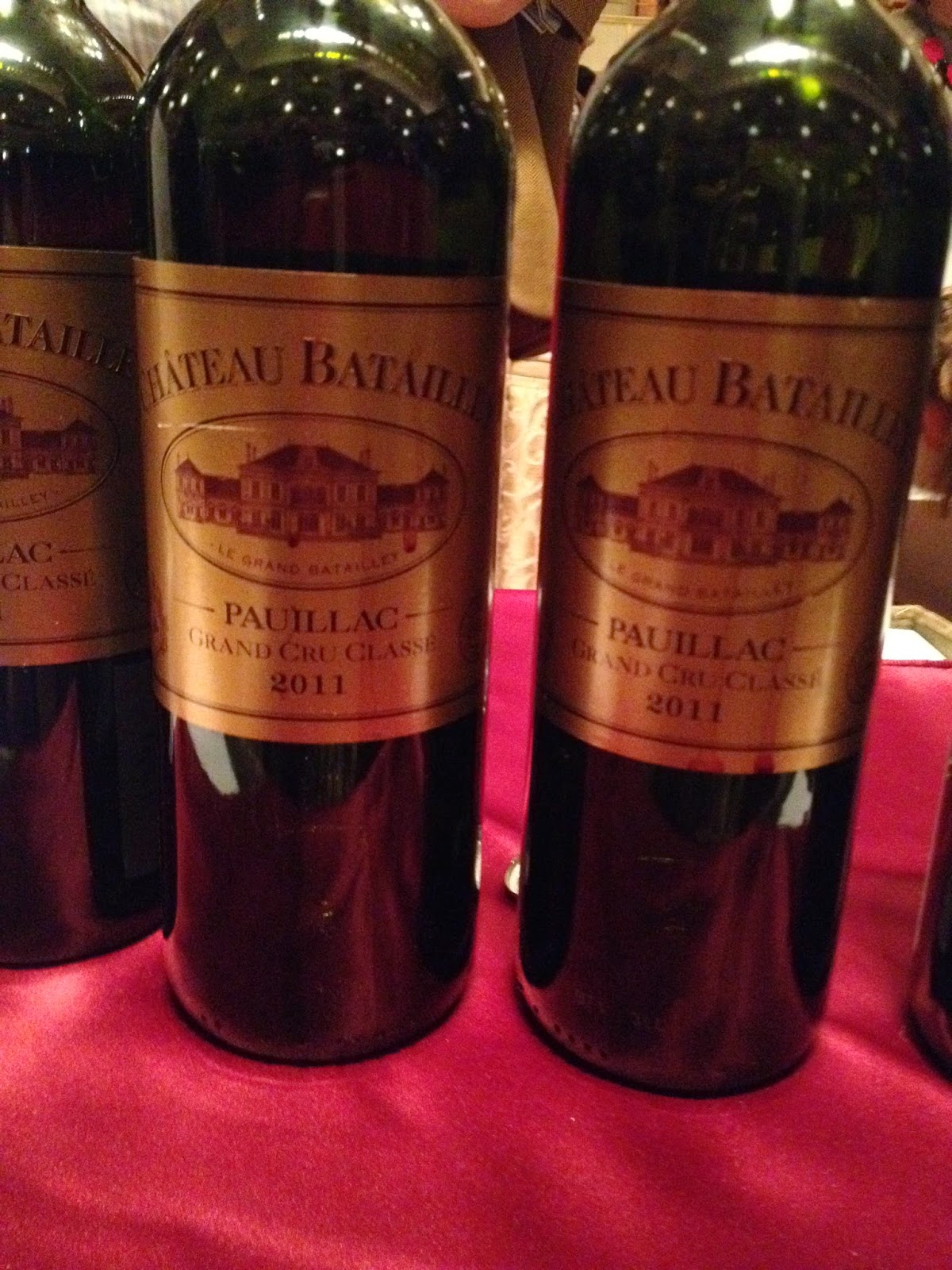 Just north of St.-Julien lies the commune of Pauillac, which many feel is the premier Left Bank sub-region. And the 2011 Ch. Batailley (Pauillac) was suitably impressive, with its sweet merde-y nose, and elegant, feminine feel in the mouth. With a strong note of lavender, it was very smooth and quaffable. ~$55

The 2011 Ch. Grand-Puy Ducasse (Pauillac) had a great nose of floral perfume and raspberry, but alas was a bit angular and acidic in the mouth. Perhaps some time will bring its fruit to the forefront. ~$48 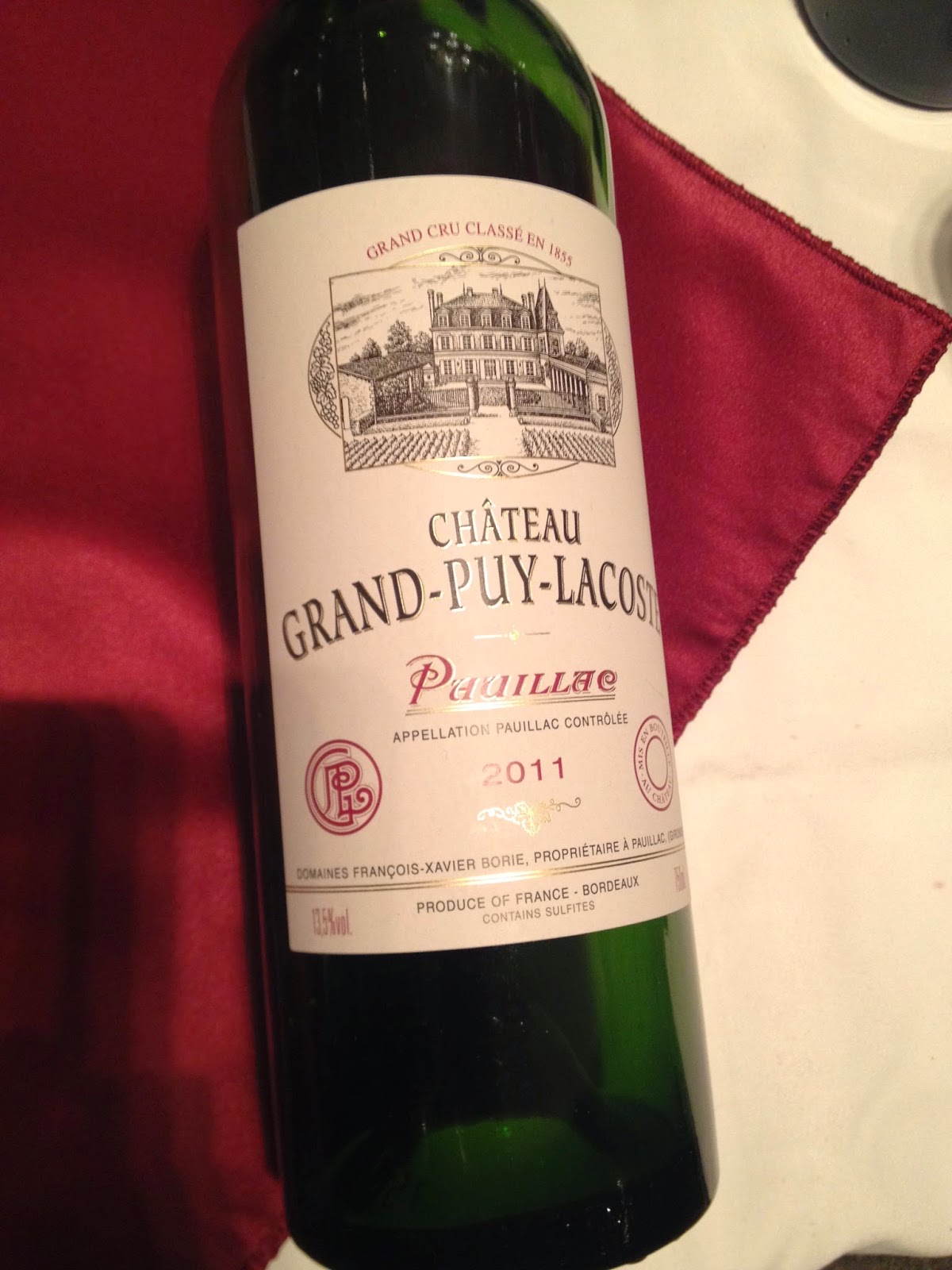 But I loved the 2011 Ch. Grand-Puy-Lacoste (Pauillac) with its fruity and barnyard-y nose, and elegant, syrupy red fruit. Not a huge wine, but it can age, although it is definitely drinkable now. My notes say, "Fun!" ~$67 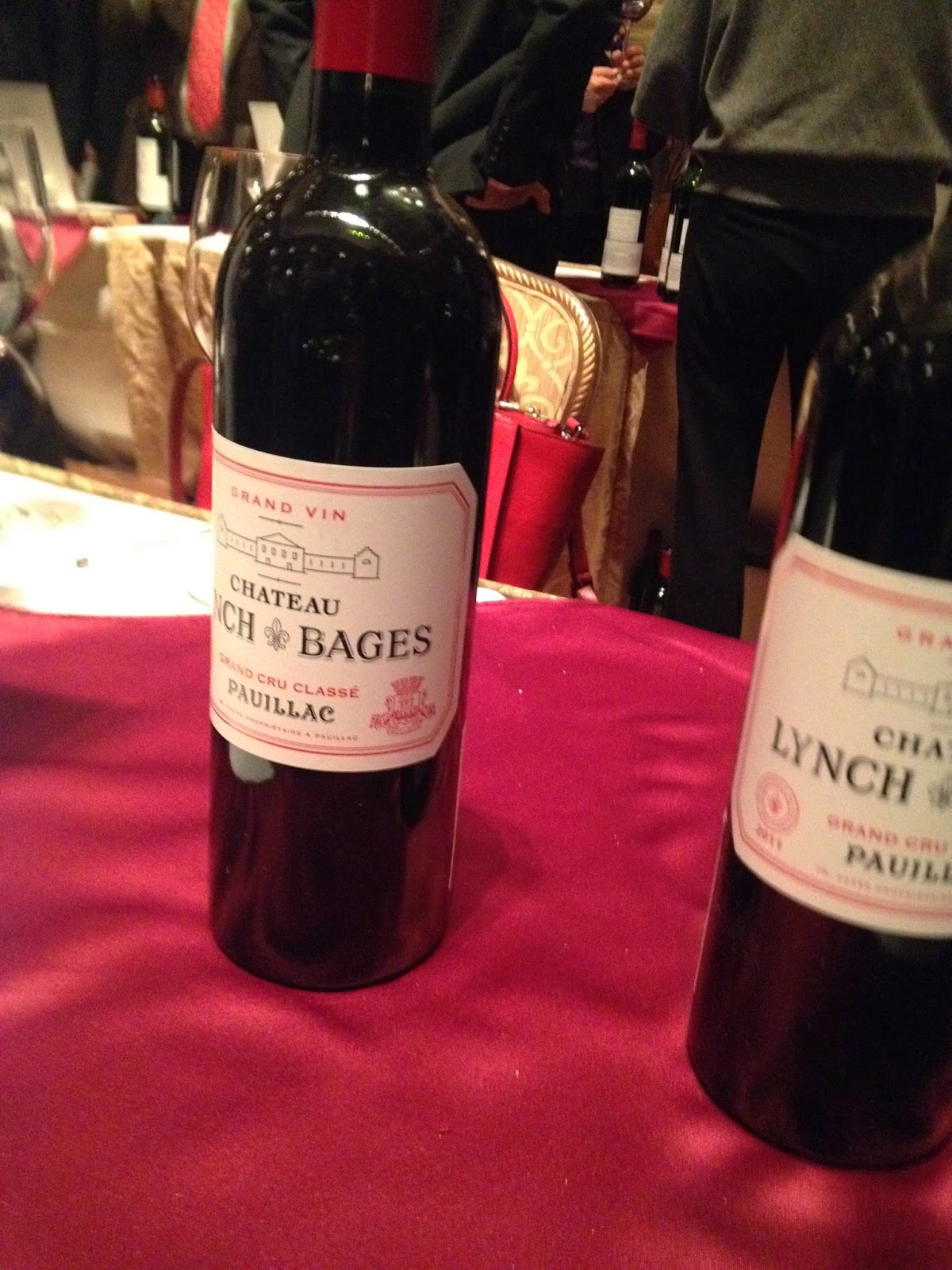 My notes also hinted at a bit of a dysfunctional relationship with the 2011 Ch. Lynch-Bages (Pauillac). With its nose of merde, herbs, and some green vegetables, it had good fruit and very well-balanced tannins, and I wrote, "Wow—knocks you down... but you kinda like it. HUGE." ~$100

Another wine I look forward to revisiting is the 2011 Ch. Pichon-Longueville Baron (Pauillac). The nose was toasty and a little meaty, but it needs time to develop although I enjoyed that it had some "...earthy, herby, woodsy goin' on." ~$115 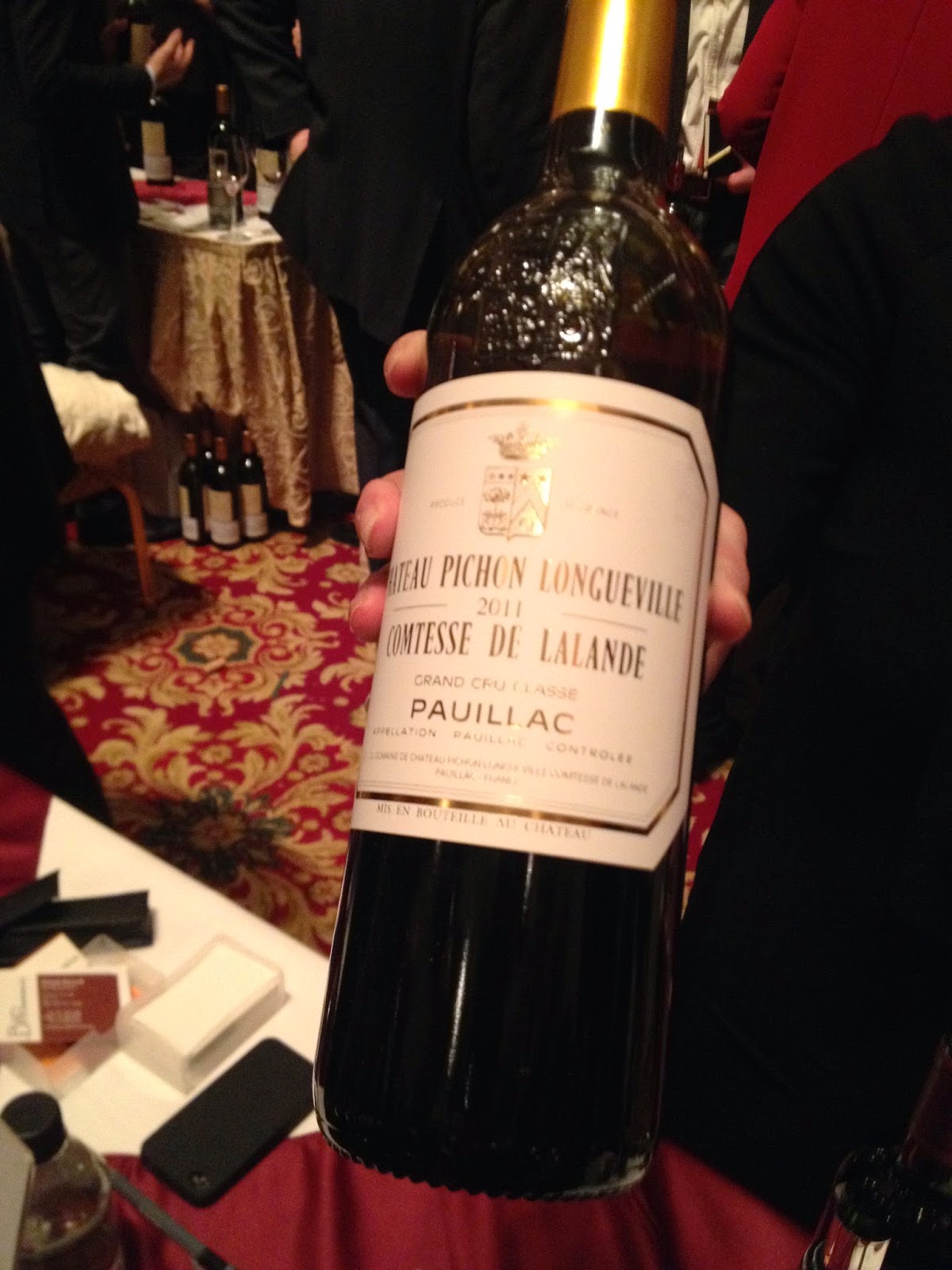 But I loved the 2011 Ch. Pichon-Longueville Comtesse de Lalande (Pauillac). The nose was very herbaceous, with lavender, violet, and licorice. There was good red fruit development, wood, and a ton of different little components which kept drawing me back. "Yummmm." ~$115

Back in my younger days, I was a sucker for the sweet dessert wines of Sauternes and Barsac. While these are also wines that benefit from aging, I was curious to see if any I tasted now would knock my socks off... and one absolutely did. However, many were a bit cloying, without strong enough acidity to balance their sweetness.

I did enjoy the 2011 Ch. Guiraud (Sauternes) with its notes of candied pineapple and baking spices. It had decent acidity, and was a little different from the usual suspects but very interesting. ~$64 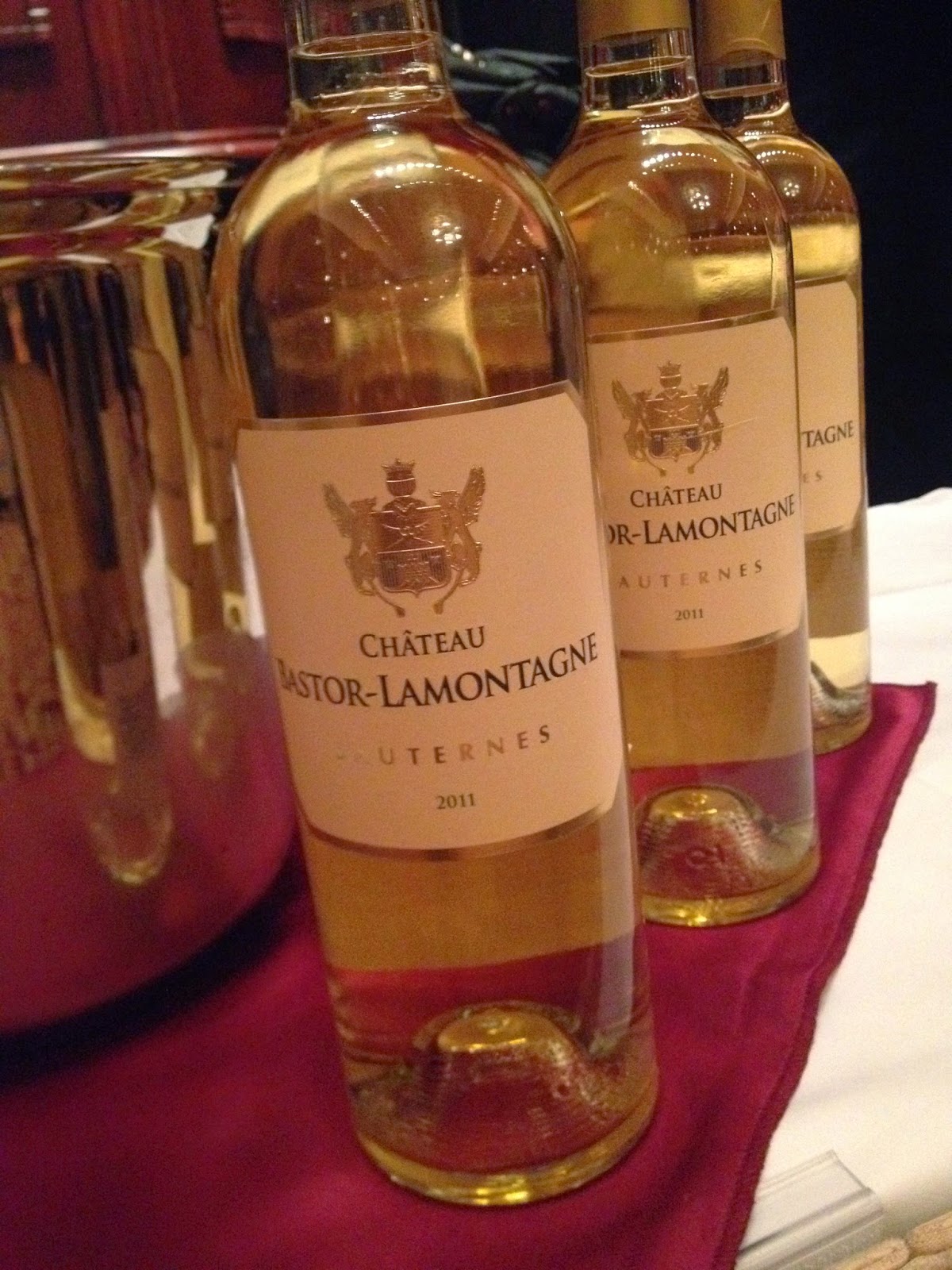 But the sock-knocker-off-er was the 2011 Ch. Bastor-Lamontagne (Sauternes). Very pale gold in color, with a nose of honey and candied melon. It had a bit of botrytis (the noble rot which looks atrocious but adds a specific, wonderful complexity to these wines.) Lovely orange blossom note, with nice balancing acidity and excellent weight in the mouth. ~$33

It is true that many white, red, and sweet offerings from Bordeaux were unbalanced and/or unimpressive, but I was pleasantly surprised to find so many enjoyable wines—and ones you don't have to wait ten years to drink. It is absolutely worth seeking out some of the above, and the pricing for these wines is fairly affordable (for Bordeaux!)

And since you time-wasted here, I'll just tell you: you are Chandler from "Friends," you would have gone to the "Breakfast Club" high school, you are Wolverine, your aura is yellow, your font is Garamond, and your super power is the power of instant lava. You're welcome.


[NB: All prices are pre-release estimates. And my camera was about to give up the ghost, so apologies for the lack of clarity in some of the photos.]

Posted by Annie Edgerton at 7:13 PM No comments:

Labels: #wine, Bordeaux, Cabernet Sauvignon, France, Merlot, Sauternes, wine
Newer Posts Older Posts Home
Subscribe to: Posts (Atom)
ANNIE EDGERTON holds the WSET Diploma in Wine & Spirits, is a Certified Sommelier, and a Certified Specialist of Wine. She is a Wine Appraiser, Consultant, Writer, Educator, and TV host. You can find her sabering open Champagne on any given day.
"Helping people love wine, one sip at a time!"